Skip to content
Ride-Alongs Not Just Along for the Ride 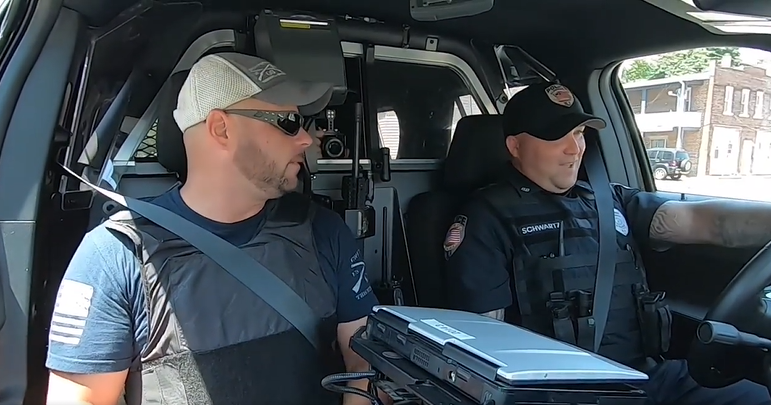 Those interested in law enforcement sometimes take advantage of ride-along programs offered by police agencies, but the reasons for doing so vary.

Generally, on paper, the self-explanatory term for ride-along is “civilian observer,” and the applications to partner with a cop in a police cruiser entail the words “Hold-Harmless” in capitalized block letters (more on that in a moment).

Some ride-alongs are just curious and want a first-hand look at police work (I’ve had retirees along for a few hours into a 12-hour midnight shift). Comparisons to Hollywood portrayals of police fill the time. Citizens are amazed at how the television and movie-making industry exaggerate and grossly mischaracterize police personnel. Surprise, surprise…cops know better. And this is one reason why civilian observation is a vital prospect, especially nowadays with all the politicos and potty-mouths slandering cops to the umpteenth degree.

A young lady named Cassie Montgomery did a ride-along with the Amarillo Police Department. Here are a few excerpts she documented during the police patrol shift:

“There were 3 very specific calls that occurred within about 4 hours that made my heart sink. Thankfully we only responded to 1 of them (the others were on different beats than ours), but imagine the mental toll it takes for an officer to hear tragic scenarios unfold on the radio throughout their shifts. They also have explicit protocols that allow them to use lights and sirens. If a unit doesn’t respond in the time you think they should, it’s because the situation didn’t warrant the lights and sirens, or it’s because the department is so understaffed at certain times of the day, your responding officer might have to go over the river and through the woods just to get to you. 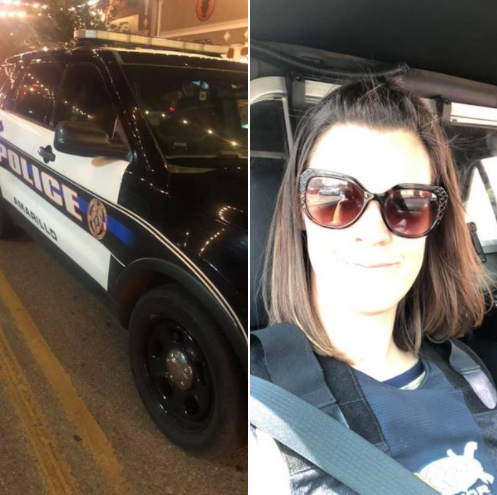 “Officers are constantly doing those kind gestures you see on viral videos with captions like “you never see cops do this”. Giving water to homeless people, keeping people company while they wait for their Uber, taking pictures with kids and giving fist bumps, visiting lemonade stands…it’s part of their day to interact with their community and they love doing it! My officer did a few sweet gestures, but we also encountered his colleagues doing them too, so you can’t even say it was all a show for the ride-along.”

Other civilian observers tend to be academicians noting how things play out, aggregating data, and drawing conclusions about law enforcement policies and procedures. Criminologists get a free front-seat view as a spectator studying various aspects of police work. (I never had a criminologist ride with me, but I did play the part as a criminology student years ago, taking notes galore.)

University students generally take advantage of college internships to garner knowledge quite different than what textbooks offer—words versus reality-based encounters. Whether interns riding along are specifically based on aspirations to be a cop or some role in the criminal justice system in general, credits are garnered and the experience is nothing shy of eye-opening.

One of the last college interns who spent a semester riding along with me and my midnight-shift squad was noticeably tense from the get-go. It didn’t take long for me and other officers to wonder if she always wore a terrified expression. I’ve no idea if she ever officially engaged in the process of a law enforcement career, but she had a boatload of realism. A few weeks after her internship concluded, she sent me a Thank you letter expressing how she had very little idea of “what really goes on in society.”

In my college days, my first foray riding along with a coastal police department exposed me to tons of demographics and a vast array of human nature (both poignant and depraved) while also gleaning a potpourri of law enforcement programs, tactics, and personas involved in getting the nation’s super-challenging job accomplished.

After interning with that municipal police department (with a bloated journal of notes required toward college credits), I signed on again, this time with the county sheriff’s office. Armed with another spiral-bound journal, I rode an entire semester and learned tons about the difference between municipal and county-level law enforcement agencies. Generally, they have the same duties, except the county sheriff’s deputies also have civil process services (so I got to witness deputies serve eviction notices and such).

Upon relocating to the west coast of Florida to continue my education, I interned full-time with a PD near the university campus, getting ample glimpses of both day- and night-shift policing. As is often a prescribed element of college internships, I scored a police job!

Thereafter, life transported me out of Florida, to a few states north, at a county sheriff’s office where I experienced several ride-along ventures. In that context, I got to do a compare/contrast regarding how law enforcement organizations operate; in many ways they are identical. In a few ways they were different (police numerical codes/language was not the same as other agencies; one officer per cruiser versus two).

After I returned to Florida, I rejoined the police department where I previously served in a uniformed civilian capacity (police service officer and then police communications officer). These roles primed me for the next rung: sworn officer (after academy training was under my belt).

I always knew I’d be a cop one day. Ride-alongs galvanized the notion. Giving back is a personal/professional tenet, so I volunteered to have civilian observers on board (when I was not assigned as a field training officer, molding recruits). On that note, police executives try to accommodate ride-alongs as best possible in terms of the date/time desired and for a certain duration.

A former Chicago Bears player did a ride-along with the Chicago Police, and a watch commander took the helm and walked the walk with Matt Forte:

Reporters conduct ride-alongs usually purposed by a docuseries on police culture, coming away with reality-based factors exposing the good, the bad, and the ugly layers of being a cop in America.

In my jurisdiction, elected city officials such as the mayor or city manager, or any member of the city council would ride with the police force. This was good for several reasons, primary of which is to express how much more effective the cops can be with funding allocations for specialized equipment, continued education, and advanced training.

As mentioned above, experienced and inexperienced police candidates looking for a police home conduct ride-alongs to get a feel and see if they’ll fit in. I’ve had several on board, and most of the time together exhausted comparisons by experienced cops checking out the agency for viable employment (doing a side-by-side with their present police department and ours).

These are just a few common purposes of civilian observers looking in at police work.

Getting back to that “Hold-Harmless” agreement mentioned above. It is a document that reiterates the endemic dangers of being a cop, and how by signing on to accept potential perils (to include injury to self in the course of duty), the prospective ride-along agrees to indemnify the police agency, its figureheads, and the jurisdictions political leadership.

Per The Hartford, a Hold-Harmless agreement is “a clause in a legal contract that releases one party from liabilities such as damage, bodily injury or financial loss.”

I suspect the video production crews riding with various police agencies depicted on mass-audience TV series such as COPS and LivePD endorse paperwork acknowledging the dangers and attesting to desires to ride along regardless of potential harms.

I’ve never known anyone to turn away from signing a Hold-Harmless covenant. Conversely, though, our agency has turned away people who applied to ride along (active warrants; showing up intoxicated; failing to satisfy dress code, etc.).

The vetting process for interested civilian observers mimics much of what police employees endure, similar to volunteers in policing who, upon successful background screening, have access to sensitive documents and confidential information. Civilian observers will likely see and hear things most individuals do not even imagine.

I will leave you with some ride-along experiences that bruised my ego —twice— when I was a criminology student conducting my police internship. On the midnight shift, they informed me of the rules before we sprung out of the roll-call gate. One major regulation was that “No civilian observer will be retained in any police fleet vehicle in the event of a pursuit of an automobile.” Wouldn’t you know it, that night, the police officer to whom I was assigned ran a tag which came back as a “stolen auto.”

Out the door I went, swiftly, dumped on the sidewalk at a busy intersection. A mid-rank supervisor not physically involved with the pursuit moseyed over and brought me back to police HQ…until it was all over.

On another occasion, the cop I was riding along with had a knack for catching burglars in action. He was damn good at it, too! He slow-rolled through residential communities (they’re there when most folks are slumbering away) and did his thing: sniffing out the tell-tale signs of night owls whose thieving ways create lotsa losses for innocents who earned their lot in life.

While documenting in my required internship journal, head down, he sees something, throws the car in park, and utters “Stay here, don’t move!” I’m a good listener. I also abide by rules/regs, so I sat for what seemed an eternity. But I was listening to the foot pursuit play out via the in-car police radio, hearing other police units racing to the area. Naturally, it was pitch black, ideally comforting to a burglar.

I sat and listened. “Cops and robbers” games played out as a kid were now a reality transpiring out there, in a space-black environment at some ungodly hour beyond midnight. The radio chatter hastened (“to the south”…”there he goes, right there”…”just jumped the fence”…”where the dog is barking”…” unknown weapons”…etc.)

I listened and waited. And waited. I started to play out in my mind what I would do if the burglar somehow managed to elude my police partner and circle back, showing up at my passenger-side door. (Firearms were prohibited by civilian observers.)

In time, my police mentor came trudging back to the cruiser with a handcuffed male dressed in all black (Hollywood may get that part correct in depictions of police work), both drenched in sweat (which permeated the police car), as fire/rescue was called to the scene for both the officer (bloodied from fence-climbing) and the nabbed burglar (same fence-climbing markers).

Coming full circle, civilian observer aka ride-along programs serve many purposes, predominate of which is educating the public about the stark realities of police culture and the formidable defenses they employ to accomplish much on behalf of so many.

For some…it’s not just an eye-opener, it could be a career initiator.