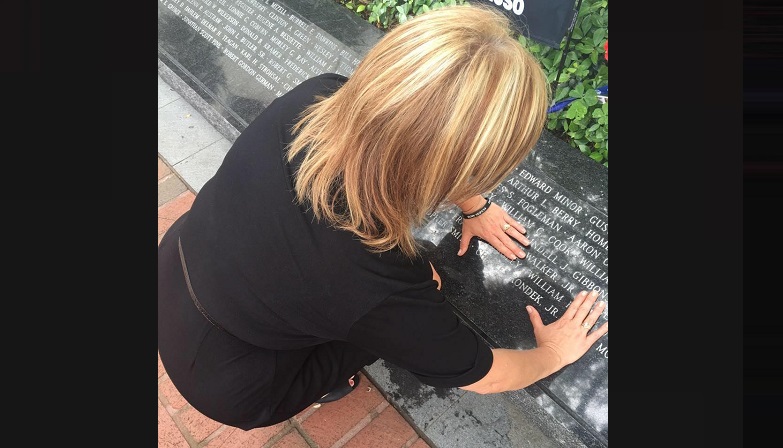 In the months preceding December 2014, Tarpon Springs, Florida police Officer Charlie “K” Kondek, Jr. relished the thoughts of a retirement home built somewhere up in the mountains. A humble abode in which he and his beloved family could switch gears and enjoy solitude afforded by nature, leave long burdensome patrol shifts behind, and live happily ever after.

Then a menace came along and unloosed mayhem…shattering the Kondek family’s police-retirement plans.

On December 21, 2014, mere days before Christmas, a sinister individual on parole and armed with a stolen firearm was parked in an apartment complex, creating a ruckus at approximately 2 a.m.

Officer Kondek was dispatched. Once on scene, he made contact with the source of the noise. Shots rang out.

Per a Tampa Bay Times article reporting on the court proceedings several years after the line-of-duty death, “…audio and video of the shooting captured by dashboard cameras mounted in police cruisers was played.

“The audio started with Kondek being dispatched to an apartment complex to check out a noise complaint. Moments later, he called for backup — his last communication — and officers flew his direction.”

The unimaginable transpired on Dec. 21, 2014, at the hands of a gunman who six months prior was paroled from prison at the time police were called to address loud music blaring from his automobile.

There’s much more to the unimaginable sequence of events leading up to Officer Kondek’s death. (Preferring not to sully the poignancy of Charlie K’s Kabin by introducing the graphics divulged in court testimonies, the Tampa Bay Times link above contains additional details for your perusal.)

However, I will share testimony given by the first back-up officer, John Gibson, who provided CPR to Charlie after he realized his squad-mate’s pulse faded:

“This is burned into my memory. He was looking up at me like he wanted to say something, but couldn’t. I could actually see tears well up in his eyes and run down his face.” 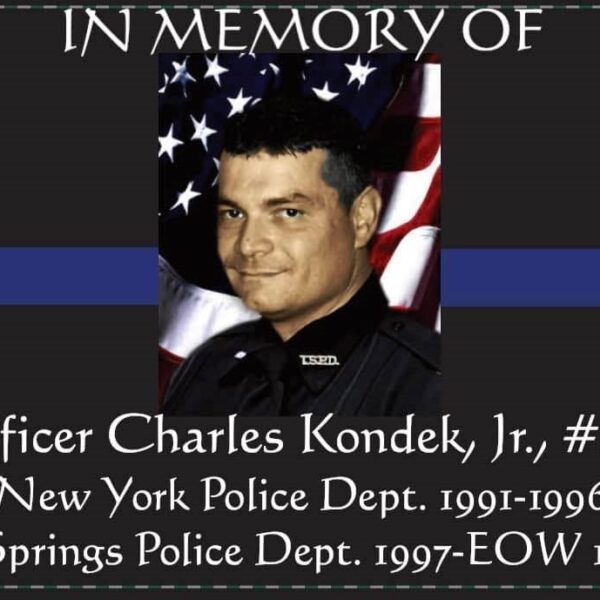 Before Officer Kondek’s line-of-duty death, I wasn’t familiar with the Kondek family, despite being one county over from their home/department in Florida. Just as cops do in life, they also have an uncanny way of bringing people together in the supernatural realm. That’s how I see it, at least. And here I am writing about this incredible police family!

Following Tampa Bay area news is how I learned of Officer Kondek’s murder. I followed the trial of the defendant. Officer Kondek’s wife, Teresa, and his family managed to endure every second of the trial, amazingly balancing composure throughout the judicial proceedings detailing the homicide.

As with any police family, a knock on the front door at an ungodly hour ordinarily sparks terror in the hearts and minds of those within. The Kondeks raised five children together, so the mind-bending news Teresa received would have to be reconstituted when informing the Kondek children.

The same police officers who delivered the awful news were just a few among a law enforcement agency comprising 53 cops, each of whom would forever stand with the Kondeks, no matter the time of day or the event at hand, for any reason whatsoever.

Teresa knew she was in good hands before Charlie K’s death. The multitude of examples followed; they still do. The Tarpon Springs PD is a shining model of what a police family looks like, that proverbial blue blood circulating well amid their system, despite the shattered pieces in a profession which tries to hold it all together for everyone else.

After steady activity which would make busy bees blush, Teresa poured water on Charlie’s retirement seed he planted in mind long ago. The property which would have been the place where Charlie could ease back and put his feet up for a change…is now dedicated to other law enforcement officers who wish to do the same thing, likely stemming from the same occupational reasons. I’ve never met Charlie in person, but I get the distinct feeling he would want it this way. Hence, Teresa set out to fulfill his dreamscape, with his police brothers/sisters invited in.

Atop the mountain perch where the tract is cleared for construction, there are no sounds of sirens. But…there is a buzz brewing.

Recently, Teresa was contacted by Macon County Sheriff Robert L. Holland, who invited her to visit his agency and speak with his deputies. As Teresa excitedly proclaimed in our correspondence, “How freakin’ cool is that?”

So, she did a meet and greet with Sheriff Holland and some of his sworn staff. 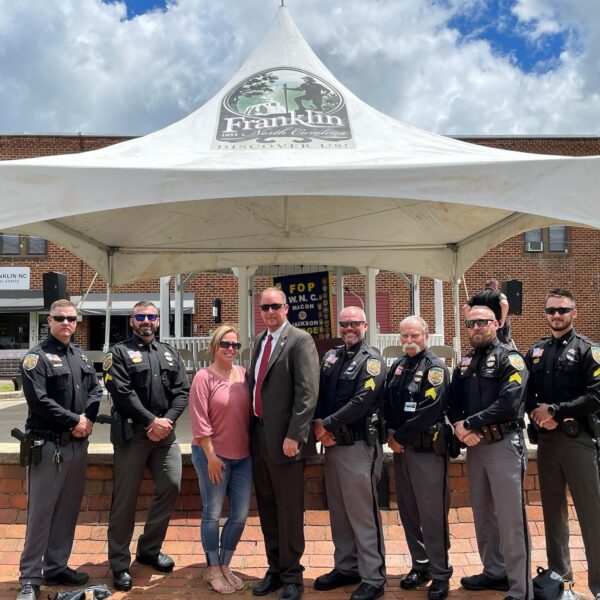 Afterward, Tarpon Springs Police Chief Jeffrey P. Young reached out to Sheriff Holland, thanking him for honoring Officer Kondek and Teresa at their county’s Law Enforcement Officer Memorial held in town square. That’s an example of Charlie’s legacy, his continual way of reaching people, and a testament to the bonds forged by turning something horrific into something quite beautiful.

Our world can definitely use more Charlie Kondeks.

Our planet can also use many more Teresa Kondeks, unwaveringly bolstering police wherever she goes, forever paying homage Charlie’s brothers and sisters in law enforcement. The Macon County Sheriff’s Office is the latest example: Sheriff Holland invited Teresa…and she made it happen, sitting among dignitaries at their Memorial.

Tirelessly, Teresa continues to epitomize the ideal pillar behind police culture, especially after all the ridiculous radicalism propagandizing law enforcement. Typical tactic when weak people feel the need to deflect from themselves and their insecurities in life.

Teresa is nothing less than a Mother Teresa for law enforcement, public safety, and first responder families everywhere. Her Giving Back to Blue covenant contains several among myriad gestures honoring the law enforcement community. 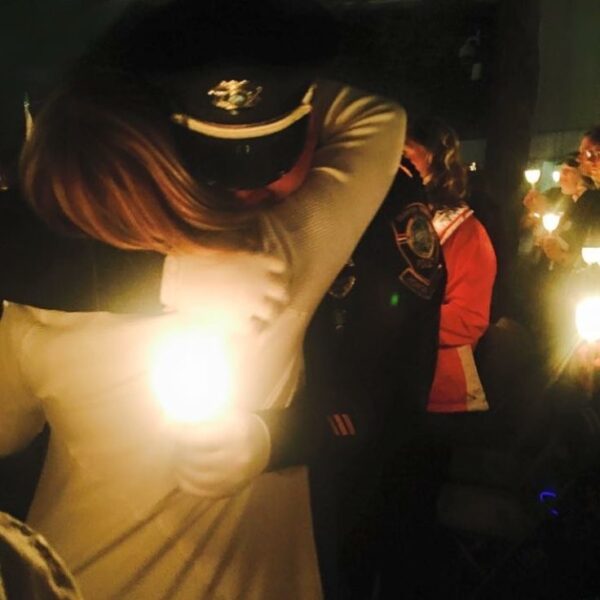 With the unrelenting tide of mental health dynamics our first responders are subjected to, Charlie K’s Kabin is an ideal elixir, compliments of a police family which knows first-hand the challenges of first responders. After all, Charlie started his law enforcement career with the NYPD, overseeing the metropolis which never sleeps.

The multitude of details, time, and funds invested in Charlie K’s Kabin is nothing shy of an exhibition of humanitarianism and the selflessness reflected by a police family for other police families enduring the same uniqueness of living a law enforcement life.

As police Sergeant Michael Trill said in his eulogy at Officer Kondek’s funeral, “Yes, there will be scars in law enforcement. That comes with police work. But we will work together to heal.”

Teresa and the Kondek children know this all too well.

Sgt. Trill echoed, “Charlie brought us closer together.” Still is. And his beloved Teresa and children carry out the mission… for other cops and their loved ones to nestle and feel sanctity in the hills at Charlie K’s Kabin.