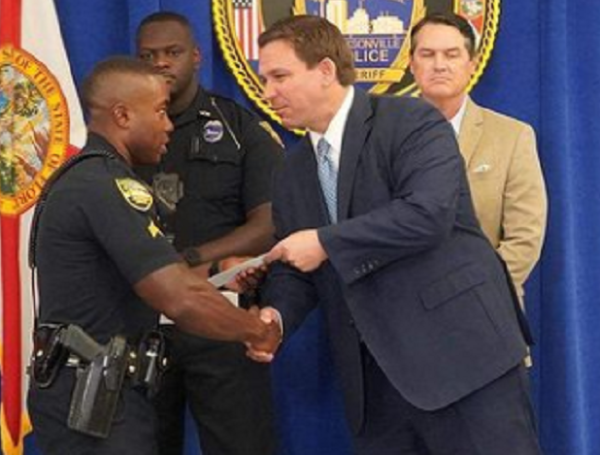 When Florida Governor Ron DeSantis announced additional economic investments to pillar all first responders yesterday, my initial response was Wow! Not because it was uncharacteristic of him and the Sunshine State’s stance with public safety professionals; to the contrary.

What captivated my attention was not only the fact that the state implores law enforcement but that it continually shows up on behalf of those who carry justice badges, evidenced by unsolicited provisions generously offered by state government so that residents, merchants, and tourists are assured a safe environment in which to enjoy life.

Yesterday, Governor DeSantis tweeted, “While other states defund their police, in Florida, we will always support our law enforcement.” He keeps proving those words to be honorable.

One year ago, Governor DeSantis announced the state’s “Law Enforcement Protection Act” inspired by liberal states hampering LEOs, permitting debauchery in the form of street riots, looting retailers, impeding motorists from free flow rights, and raining debris down on any physical presence of cops. Essentially, crimes against justice already in the state statute books were given more sharpened teeth to deter would-be antagonists and mete out punitive measures to those who upturn noses at law-and-order principles.

At yet another pro-police presser held by Mr. DeSantis, he ripped into defund-the-police policies. This particular press conference transpired at the Lakeland, Florida police department where, as NPA recently reported, some of the exodus of NYPD cops found a new home in police-blue uniforms insignia’d with Lakeland PD patches.

That brief video in September 2021, announcing the state’s plan to offer $5000. sign-on bonuses to new LEOs, explores some great feats for cops. Incidentally, when was the last time you heard a state attorney general say that police officers are not only necessary but also “celebrated”?

So celebrated that Florida handed out a $1000. bonus check to each of its roughly 49,000 law enforcement officers throughout the state—including firefighters and paramedics, 149,000 first responders were rewarded for selfless service to communities spanning the Sunshine State’s 67 counties.

The economic boost to Florida’s public safety resources flies in the face of oppositionists, specifically those decrying police presence which, by extension, makes communities much more vulnerable to predation by miscreants and statistical nightmares generated by otherwise avoidable incidents.

On the heels of the Florida news honoring first responders with deserved compensation underscoring wholehearted gratitude for those whose entire premise and purpose is vested in life-saving covenants, severely crime-ridden Oakland, California and its Mayor Libby Schaaf and city councilmembers made the news for being the latest about-face defund-the-police jurisdiction to proclaim a horrendous crime problem, leading to refund-the-police measures.

This, from the sanctuary-city mayor who imperiled ICE agents in 2018 when she effectively aided and abetted illegal immigrants holing up in her city, warning them against raids by federal immigration agents.

As the southern governor stated, defunding the police has “truly been one of the most disastrous policies” peddled and launched by liberal governments on behalf of woke activists whining for outlandishly counterintuitive initiatives satiating selfishness.

DeSantis’s statement provides apropos segue and evidence of one such “disastrous” notion exemplified in a municipality on the nation’s west coast, namely Oakland, California.

Listen to the liberal lyrics composed after defund-the-police measures put egg on their faces:

That is one among many similarly sad sagas evolving across America, specifically in certain jurisdictions whereby the hard-on-cops and soft-on-crime stance stood tall and proud, with activists’ hearts aflutter.

Like any other anti-cop jurisdiction, one must ponder the damages done and the lives lost, all needlessly permitted and unfailingly in the exact same pedigree and its inherent modus operandi: Liberal landscapes.

Although not a state governor, Spokane County, Washington Sheriff Ozzie Knezovich has a contribution to our subject matter today, saying, “We’ve been doing this recruiting effort all summer long. We’ve chosen areas around the country that have a history of not showing a lot of support for their local law enforcement. Austin has a reputation of not really supporting their local law enforcement.”

What is he referring to? His agency paid for “help wanted” advertising on a billboard along a certain roadway, the contents of which sought to capture the attention of severely defunded Austin police officers who…may want to consider greener pastures elsewhere, to the tune of a $15,000 signing bonus.

You know how you sometimes, usually much later on in life, have an Aha! moment and mildly smirk about a certain seemingly devastating thing which marvelously turns out to be in your significant favor down the road? Welp, this latest revelation by Florida’s governing body continually honoring cops and firefighters and paramedics for unceasingly performing perilous duties in a confluence of otherwise discouraging miasmas…compels reminiscence of the years I scratched and ached to be a NYPD cop, to no avail (cancer battle).

Instead, many years later I’d find myself in Florida, jutting my hand and swearing my police officer’s oath. Although Governor DeSantis was not in gubernatorial office at the time, I was never devalued and demoralized by any of his predecessors throughout the decades, in a land far from the Big Apple.

In an early-morning finance class I attended before stringing these words together, a mentor spawned the conversation about “giving back” and how “communities today seem different than they used to be.” He segued into people who are cash-strapped by the current economic environment and in dire need of basics…and a wedge placed by politicians staying stuck on divisive dialogue and unloosing counterproductive maneuvers.

Successful in his own solitary existence, my professor talked about being positioned with resources for those less fortunate. My mind jumped into the pool of resources we know as cops, patrolling respective jurisdictions, deciphering needs, and meeting those needs as best possible, often with out-of-pocket funds given directly from the heart. Pro-police states recognizing cops by honoring them with commensurate provisions is especially gratifying and mutually benefitting (as described in the last sentence).

Indeed, law enforcement roles do not necessarily compensate handsomely when compared to other professions in American society. LEOs go in full knowing this factor. Yet, the enrichment materializing from robust human interactions, many involving rough-times interventions, is tremendously rewarding. I relate from first-hand experiences. For cops, responding and plucking a child from tragic circumstances unfolding in deplorable environments is far more enriching than gold bullion.

Similar to Florida’s mindset regarding policing, Texas publicly extended open arms to any federal agents who found themselves targeted for termination for refusing to take the Covid vaccines unconstitutionally mandated by the federal government or for the Haitian illegal border crossing fiasco, law enforcement officers being maligned, defiled and devalued are afforded options by pro-police sovereign governments operating under the red, white and blue.

“By prioritizing public safety in the 87th legislative session, Governor Abbott is sending a loud and clear message that Texas will always be a law-and-order state. His efforts to stop defunding will ensure that the men and women in law enforcement have the tools and resources needed to keep Texans safe. And his initiative to combat revolving door bail policies will stop violent criminals from being released to further victimize our communities. I am committed to working hand in hand with Governor Abbott to implement these critical initiatives and keep our communities safe.” 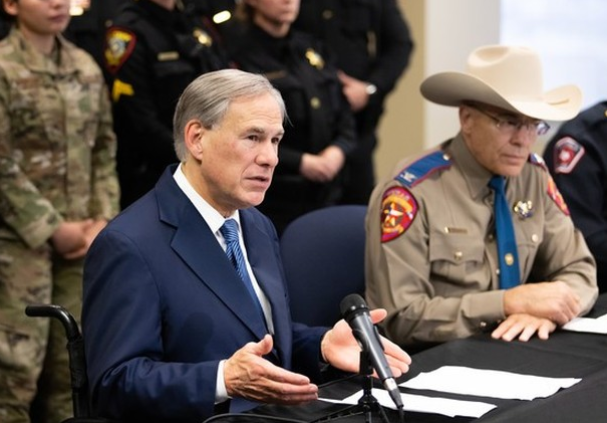 “On behalf of over 30,000 peace officers, we extend immense gratitude to Governor Abbott. It has become harder than ever to be a peace officer, yet Governor Abbott has not turned his back on law enforcement. He has stood for law and order and has met improvident police reform bills with strong conviction, ensuring that public safety remains a priority in our Great State. TMPA is proud to work with The Governor to create sensible public policy that will further professionalize law enforcement in Texas.”

Thus, we see compliments for cops in the form of not just deserved compensation but also in legislation to galvanize police roles, ultimately fashioning LEOs as best possible to effectively accomplish the mission of public safety on behalf of the citizenry who know better than to foolishly cancel cops.

Having said that, my algorithms flagged the fact that, not only did Governor DeSantis avail duly deserved enhanced economies for cops, his state Department of Highway Safety and Motor Vehicles which oversees the Florida Highway Patrol unveiled a calendar of dates in anti-police states where troopers will set up tables and tents to manifest recruitment of LEOs looking for a crystal ball glimmer to replace present-predicament gloom. 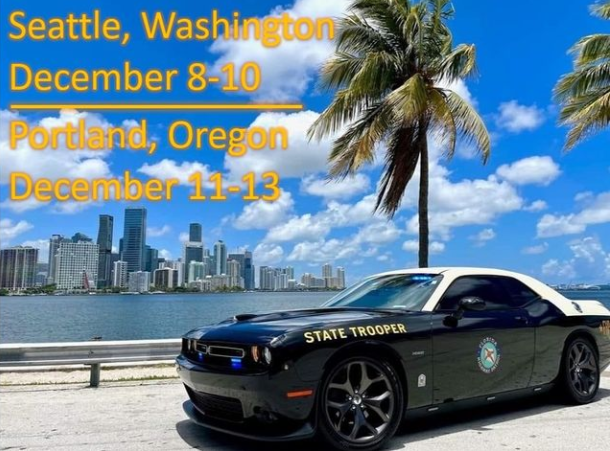 As Senator Lindsey Graham reiterated recently, “The enemy is the radical Left, who is driving the Democratic Party down an insane road, making us less safe and less prosperous.”

Although a largely conservative state, Texas has its anomalies similar to Florida’s small portion of police-defunding cities (which have since seen legislation curbing defunding in the Lone Star State and Sunshine State).

Sheriff Knezovich got right down to brass tacks: “I guess to the agencies that lose [LEOs], I would ask them to maybe reflect on their local elected leaders and their efforts to maintain their employees. You don’t do that when you talk about defunding and devaluing the profession, and the areas where we’re recruiting from have shown that they have.”

The senator’s message is shared (at least by like-minded observers paying attention and alarmed by unmitigated chaos), and one which caters accolades to governments going in the opposite direction of the “radical Left,” unambiguously bolstering agents of public safety institutions for the betterment of citizens who care not to be anywhere near any “insane road.”