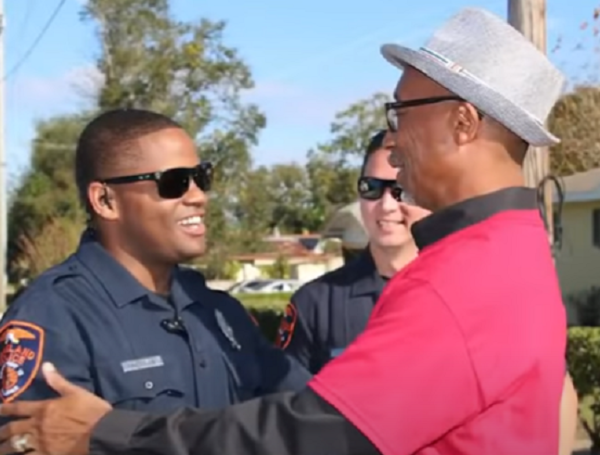 Although much of the news lately has been concentrated on the “red wave” in the political arena, there is a blue wave going on—and we do not necessarily mean the liberal party factions.

To the contrary, the blue wave ordinarily associated with political realms notoriously chanting anti-police sentiments with a fanged push for either defunding police or outright abolition of the law enforcement institution is materializing in an undeniably expected relocation effort by men and women donning justice badges, all of whom have had enough concocted browbeating and maligning of their character, compounded by unconstitutional mandates.

Heck, a growing number of noted liberal figures are speaking out against the irresponsible thrust of elected officials decimating public safety by implementing pie-in-the-sky intoxicants otherwise categorized as “wokeism.”

“What went wrong is just stupid wokeness. Don’t just look at Virginia and New Jersey. Look at Long Island, look at Buffalo, look at Minneapolis, even look at Seattle, Wash. I mean, this ‘defund the police’ lunacy, this take Abraham Lincoln’s name off of schools. I mean that — people see that.

“It’s just really — has a suppressive effect all across the country on Democrats. Some of these people need to go to a ‘woke’ detox center or something,” he suggested. “They’re expressing a language that people just don’t use, and there’s backlash and a frustration at that.”

Indeed. I’ll add that, in particular regard to chronic vilification of law enforcement by denouncing its very existence, we are seeing the deleterious effects far more widespread than “on Democrats,” spreading to just about every corner of the nation, evidenced by outrageous ambushes and unrelenting assaultive behaviors against anyone wearing a justice badge.

The political headwinds may have stronger waft in liberal-land —squashing lungs of law and order— emboldening mentalities traversing wherever they please, employing depraved behavior encouraged by the likes of wokeness ushered by elected figures’ twisted agendas.

Incidentally, one in-your-face example of the twisted agenda reference is some of the anti-cop barkers hypocritically spending constituent tax dollars to hire private security guards for themselves (read: you’re on your own).

While the powers that be haggle over trillions of tax dollars in Congress, while citizens still suffer from socioeconomic burdens brought about by a pandemic pounce and socialist-proportioning pork, while public safety in an increasingly vulnerable society is threatened with skeletal scaling or abject removal, many self-serving public office holders invariably place themselves in higher regard.

Although that imagines fighting for yourself, only those voluntarily donning blinders can not see police ranks doing their darndest to combat crime in a sea of tumult, with underscored dangers to themselves. It is simple arithmetic to denote who authentically cares (cops) versus those whose hateful manifestations do no one any good whatsoever (radical politicos).

At the risk of soiling this material, integrity insists that we offer contrarian perspectives and how anomalies evolve where none are expected. In a rare stance for law enforcement, California Democrat Governor Gavin Newsom appears to be recognizing the glaringly avoidable travesty of his state’s corrections officers departing for greener pastures…if vaccines are mandated to continue working at state prisons.

Per a Los Angeles Times piece titled “Newsom and guards challenge vaccine mandates at prisons, warning of staff departures,” reporter Richard Winton wrote, “With COVID-19 vaccine mandates growing across California, opponents in law enforcement are warning that their ranks would rather quit or retire than get their shots.”

Synonymously, on a county level, Los Angeles County Sheriff Alex Villanueva warned that his agency of roughly 11,000 sworn deputies is encountering an exodus of crimefighters due to vaccine mandates.

In another report, Sheriff Villanueva called the vaccine mandates the “altar of wokeism.” Mind you, this law enforcement executive speaks from the heart and shoots from the hip, undeniably hindered in his efforts to provide stellar public safety due to liberal-laden agendas overlording and imposing mandates without substantive reasoning.

As Sheriff Villanueva confirmed in that brief video, many of his deputies have already severed from the Los Angeles County Sheriff’s Department and took police roles in jurisdictions where vaccines are not mandated. Naturally, the LACSD exodus of deputies prompted a hiring blitz under the banner “Hometown Heroes Needed. Are You In?” Surely the answer supposes treatment of potential takers who may have eyes for a Los Angeles Sheriff’s star.

While the White House administration and minions in certain state and local governments press on with vaccine mandates, LEOs either already have or are prepping to transplant where mandates do not exist at agencies whose constituencies embrace the blue wave of badges stepping boots upon novel territory in more promising communities.

The benefactors of phenomenal, highly-trained and vastly experienced human beings filling arduous and perilous law enforcement roles are the sovereign governments generally within the borders of pro-police states.

Like the Cali example above, some cops are finding police roles in jurisdictions which, despite cells of defund-the-police mentality, are comforted by police executives “bucking” the naysayers and parlaying support from true blue leadership. In another recent episode denoting Democrat destruction lately, “Democratic County Executive Steve Bellone will announce Monday that he is hiring 705 law enforcement personnel, bucking the ‘defund the police’ movement in his own party,” reported the New York Post.

Largely, residents in states impacted by the reckless-abandon nature of their elected officials —who bizarrely pursue the ideation that cops are not a component of functional and constitutional governance— stand to epitomize the “you get what you pay for” idiom, compliments of bad government.

Attention is drawn to the burning issue of matriculation factors and beleaguered efforts being increasingly expended on recruitment of police cadets to fill the roles vacated by seasoned veteran officers who were compelled to choose what is best for their families.

Although typical passion and ambition applies with respect to police research endeavors, I never sought material pertaining to hiring volleys popping up left and right, some with quite handsome six-figure salaries, others with hiring bonuses above starting salary. Seattle is one such example, rolling out $25,000 incentives supplementing base salary for new recruits.

Even though some extraordinarily boisterous anti-police governments/leaders have stowed away their bullhorns and started to walk back their defund-the-police diatribes, it is too tardy; cops are being sworn in in jurisdictions near and far. LEOs are showing up in other states which embrace public safety professionals.

The largest municipal police force in America, the NYPD has seen its ranks deplete from the chronic battering from both politicos blowtorching the blue guardians and the concomitant daily assault on cops, evidence compliments of shameless cell phone-recording spectators who did nothing to rebuke and/or intervene crimes against justice officials.

Police officers pushed to the brink of submission was heightened/worsened by anti-cop alt-branding resulting in subliminal criminal commissions. One need only peer back at five Seattle Police vehicles set ablaze…or fully-engulfed NYPD vans ordinarily transporting squads of cops to foot posts…or a Chicago police cruiser torched by rioters after smashing business windows. There are others just like these, and the commonality is each transpired in a liberal enclave pushing anti-cop scripts. In effect, it comes as zero surprise that wittingly or unwittingly, they pushed police to choose change in life course.

States in the south have been receiving now-former NYPD cops who grabbed at greener pastures, not only for bonuses granted for merely serving the public but also for stable lifestyles for their loved ones.

Especially through recent years, for NYPD cops it has been nothing shy of walking through a minefield of politically deployed deathtraps while trying fervently to deliver help to innocents who screamed out for salvation. Many are dissatisfied with what the Big Apple has become.

Another metropolis police entity mired in wokeness and the whittle of its police force is the Philadelphia PD which recently de-policed “minor traffic laws.” Putting cops in time-out can easily result in departures of cops feeling hamstrung by politicos and executives who tacitly tip-toe away from leadership principles. Probably no coincidence that Philly PD has recently circulated its hiring posters, implicit of vacancy. “Be the Difference” is the Philly PD slogan; if only they allowed cops to exemplify those words.

Relative and always imperative are the catalysts of all the anti-police morass spun by sinister figureheads and woke culture, sadly manifesting in increased police suicide rates.

Police suicides pinnacle the treachery in first responder roles, exacerbated by the ill-placed derogatory marks against the law enforcement contingents confronting our nation’s most dangerous woes, ultimately burdening crimefighters to the extent self-destruction plays across their psyches.

In conclusion, then, self-preservation in any manner conducive to not only surviving but also thriving is elementally sound and deservingly apropos for the utter minority of sworn figures standing up for those who herald heroes in times of dire need.

As Mr. Carville stated about the out-of-control anti-police liberal party’s wokeness, “there is backlash and frustration.” Cops are included in the mass lot of betrayed citizens, and they are exercising their nation-providing liberty to work where they choose, where they are appreciated, where they are not unjustly vilified while instilling justice on behalf of everyone’s constitutional promise.