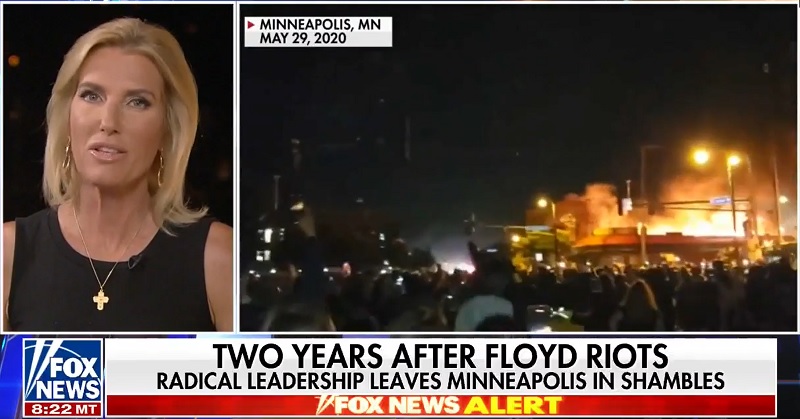 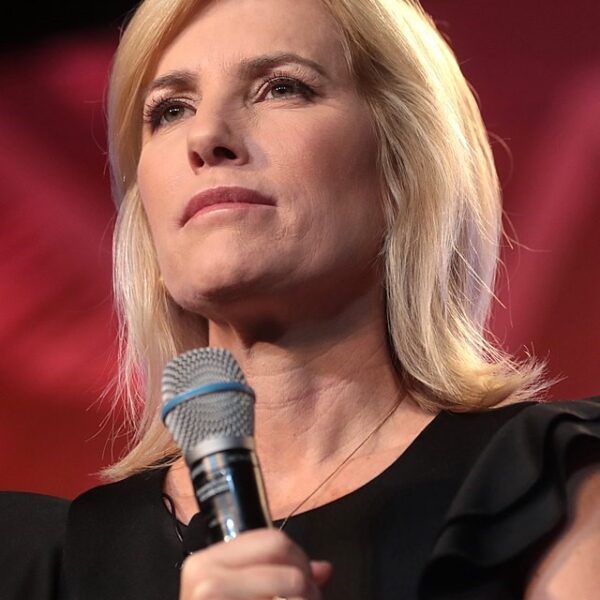 That sacked building alone could tell the story Laura Ingraham conveyed on a recent episode of her FOX News Channel show, The Ingraham Angle. But let’s go ahead and use some words to flesh out the grand failure (or success, by the leftist measure) of that once-great city’s “leadership.”

The Minnesota Reformer’s Deena Winter wrote, “Fox News host Laura Ingraham recently aired a segment in Minneapolis where she interviewed police officers who painted a grim picture of the city.” 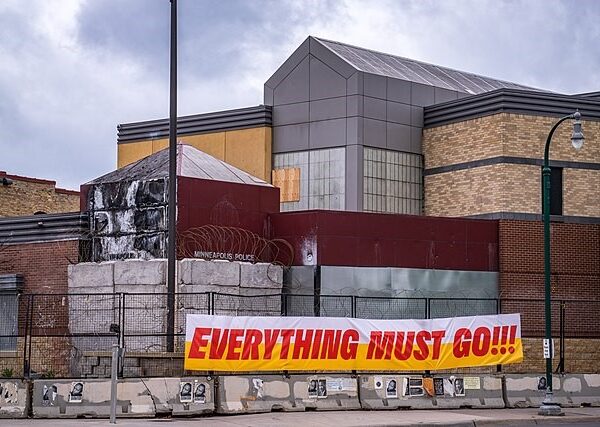 Winter added, “Ingraham interviewed Lt. Jeff Waite and Sgt. Andrew Schroeder as they walked around the former Third Precinct police station, which was destroyed in the riots after George Floyd’s police killing in May 2020.”

“It’s a monument to anarchy,” Ingraham said. “It’s a shock that this is allowed to stand.”

This year, as reported by CBS News, Sgt. Schroeder received the Chief’s Award of Merit as an Officer of the Year. He was also awarded the Medal of Valor for his part in wrestling away a gun from a suspect who’d pulled it on him and his partner. The sergeant is a part of a “gun unit” whose focus is on taking illegal guns off the streets.

Roughly 1,600 miles west, though it didn’t suffer nearly the structural damage of the MPD’s 3rd Precinct, the Seattle Police Department’s (SPD) East Precinct, which city officials ordered abandoned during the CHOP/CHAZ debacle, was back under police command and operating within a few weeks. 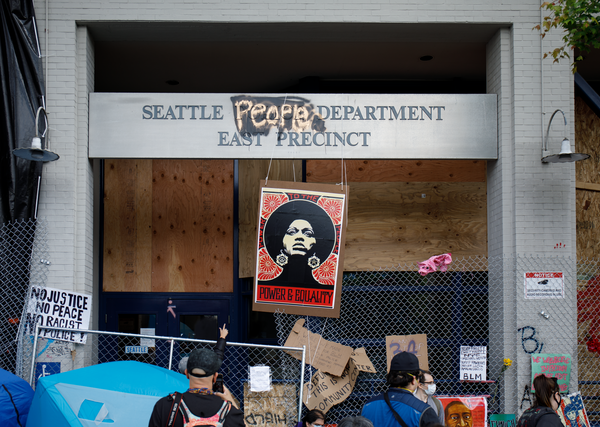 Seattle leaders finally allowed the cops to do their jobs, and they did it efficiently. They quickly retook their precinct and the surrounding occupied blocks. Jenny Durkan’s “summer of love” “Durkanistan” came to an ignoble end.

About the operation, Townhall’s Julio Rosas wrote, “The Seattle Police Department said their officers were in riot gear because ‘individuals associated w/the CHOP are known to be armed and dangerous/may be associated with shootings, homicides, robberies, assaults & other violent crimes.’” It came several deaths and many serious crimes too late.

Back to Minneapolis, leftist politicians showed they don’t like anyone challenging their rule. The city’s thin-skinned, barely-there mayor, Jacob Frey, certainly answers to that description. He has a unique distinction of being the mayor of a major American city where the left chose to conscript and exploit an isolated police incident with which to devastate American cities and law and order culture. 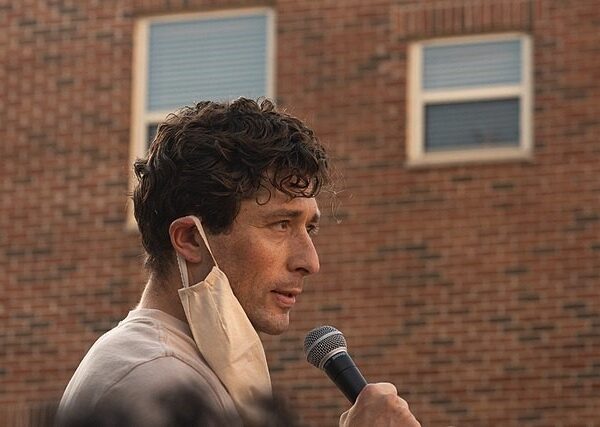 The Reformer also reported, betraying their leftist bias, “Ingraham’s appearance with Minneapolis police raised questions about why a broadcaster with a history of inflammatory right-wing opinions and a sour view of Minneapolis was allowed access to officers for her national opinion/entertainment program.”

But some of the information reported is useful. For example, “(Katie Lauer, a spokesperson for Mayor Jacob Frey, said the mayor was not aware the interview was happening).”

That was odd because Ingraham said her staff contacted Frey’s office multiple times during the weeks leading up to the interview. This claim seems legitimate based on previous processes the show followed with past similar stories.

But Frey doesn’t have a reputation for listening to the other side on issues. A few years back, he banned MPD officers from participating in “warrior (officer survival) training.” Reportedly, the mayor refused to observe a training session to learn for himself. Why muck up with facts ideological decisions that risk cops’ lives?

The situation in Minneapolis is so bad, according to PJ Media’s Victoria Taft, “The Minnesota Supreme Court has ordered kneeling Minneapolis Mayor Jacob Frey and his band of defundanistas to hire more cops as required under the city’s charter or show why they can’t.” 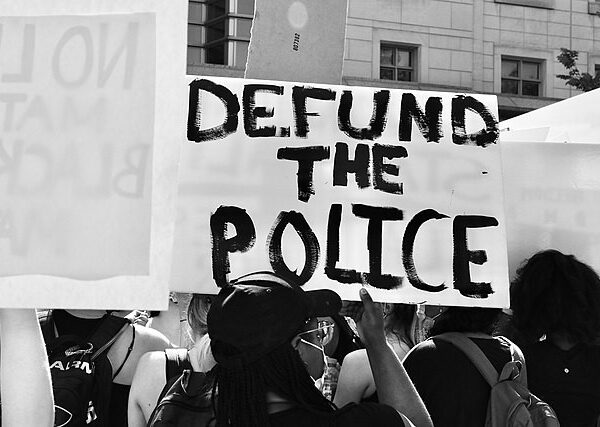 And, as far as the Reformer’s citing Ingraham’s “sour view of Minneapolis,” she has often spoken of her affection for Minneapolis and Minnesota, taking vacations there frequently. She also visited Minneapolis during the immediate aftermath of the riots in support of business owners and residents.

In another act of tyranny toward transparency and access, according to Townhall’s Julio Rosas, he had scheduled a “ride-along” with MPD officers to watch them work, so he could write about it. But after Ingraham’s interview, the city suddenly canceled it and “revised” its policy.

Now, all ride-along requests must be pre-approved by City Hall. During my career, I don’t recall any ride-a-long needing more than a sergeant’s approval. The department paused them just before I retired, but that was because of staffing issues, which would have been a better excuse for Frey.

Brown takes a stab at an answer: “Is it because the reality on the ground doesn’t match the rosy picture painted by Democrat leaders who’ve overseen the city’s decline into chaos?” Not surprising from a city whose leaders not only want to defund but to abolish the police department.

According to another article from the Reformer, “A newly registered group called ‘Vote Yes 4 Minneapolis’ reported a single $500,000 donation [from George Soros’ Open Society Policy Center] to campaign for a proposed charter amendment to dismantle the Minneapolis Police Department and replace it with a new department under the control of the City Council.” 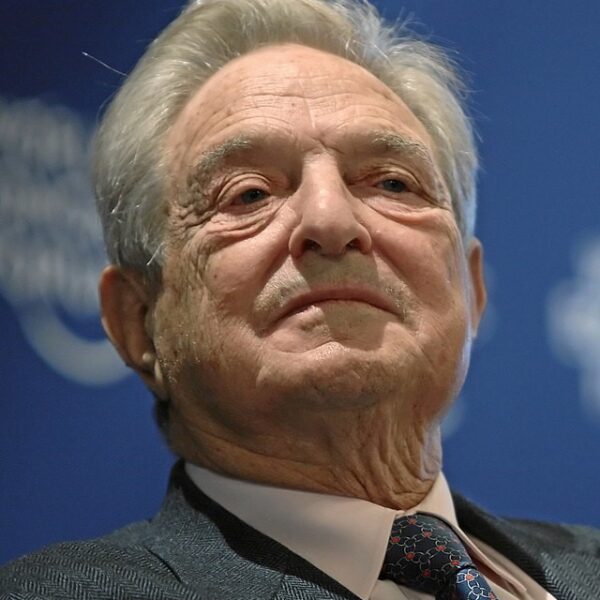 Having covered Mayor Barely There and their kooky city council for more than two years, it appears Brown is over the target. This new brand of radical leftist, Soros-esque politician needs to control everything—every thought, word, and deed—more power over the people.

Cops need to pay attention and do what they can to stand against political tyranny. After all, ultimately, if the radical left wants to succeed in enacting their agenda—to control the people, they’ll need the cops to make it happen.