Skip to content
Gutting Police Services for Pie in the Sky 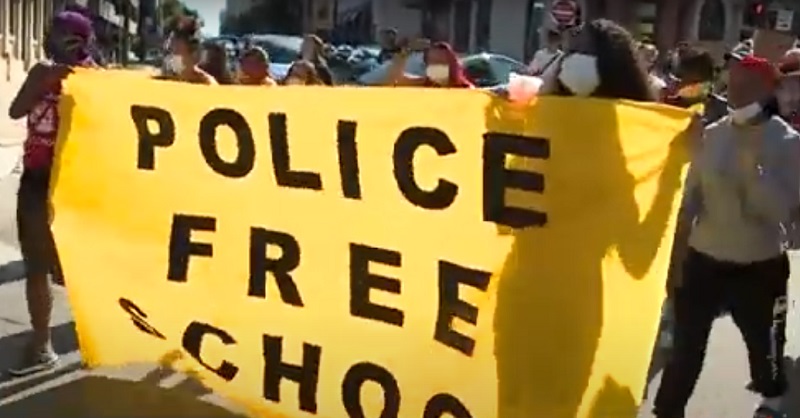 If a headline read “Ambulance Services Cut to Fund Cardiac Health”, readers would shake their heads in disbelief. Would hospitals really stop responding to ambulance calls for heart attack victims to help pay for education, brochures, checkups, and low-fat diet plans? Do nations at war cut spending on troops to pay for more diplomats? Should plumbers stop fixing stopped-up toilets and concentrate on installing new pipes?

The teacher’s union in Bellevue, Washington has passed a resolution against having a school resource officer (SRO) in favor of using whatever funds would be for a police presence in their school to be funneled into counseling and mental health services. The renewed discussion comes after a shooting at a nearby Seattle school that left a 17-year-old student dead at the hand of a 14-year-old who brought a handgun to Ingraham High School.

The union, claiming to represent the interests of Bellevue teachers, parroted the ideology of the National Education Association which vociferously opposes law enforcement in schools as a corollary to their Black Lives Matter in schools agenda. “There’s definitely a history with students of color feeling a certain way with the presence of officers in school,”  Jill Rock, president of the Bellevue Education Association asserted.

The resolution referred to a previous 2020 resolution that states the district must recognize “…that we participate in and perpetuate the school-to-prison pipeline and other expressions of institutional racism through our biases, our curriculum, our pedagogy, and our discipline policies, and that we continue to harm Black students and families when we do not act to dismantle institutional racism…”

The resolution goes on to say “WHEREAS, the Bellevue Education Association recognizes that many students and staff have experienced an increase in violence across campuses in recent years and there exist valid, important concerns regarding safety on campus. WHEREAS, the BEA supports clarifying the responsibilities and further training of on-campus Administration to respond to incidents of violence and also to increase access to mental health counseling at our schools.”

Whether the union truly represents the feelings of teachers or students of the school, it does represent some curious reasoning in explaining its opposition to SROs. In referring to the “school-to-prison” pipeline, the resolution states as fact that responding to disciplinary problems results in students being groomed for a life behind bars because of institutional racism. Differential treatment by race is certainly a matter deserving of study and monitoring, but to identify SROs as a core component of the allegation ignores the value of officers’ presence.

In an irony that seems to escape the authors of the resolution, the document validates the existence of safety threats on campus and an increase in violence. Their answer is to better train administrators on responding to incidents of violence. If there is an administrator’s union, it would be interesting to see what their view would be of making first responders out of administrators.

There is widespread agreement that the need exists for better access to mental health services, especially for young people. What is far less certain is what these preventive services would accomplish in reducing individual’s acts of violence. SROs are a safety net, not only for immediate response to threats and violence but as an effective relational connection to students and a presence that can discourage attacks.

The final logical fallacy of the purloining of law enforcement resources to fund mental health resources is that it is a binary choice of one or the other. They are two different functions for two different purposes. There is no mathematical correlation to school safety in subtracting from one and adding to another. So, sure, bring on the counselors. But keep the cops.