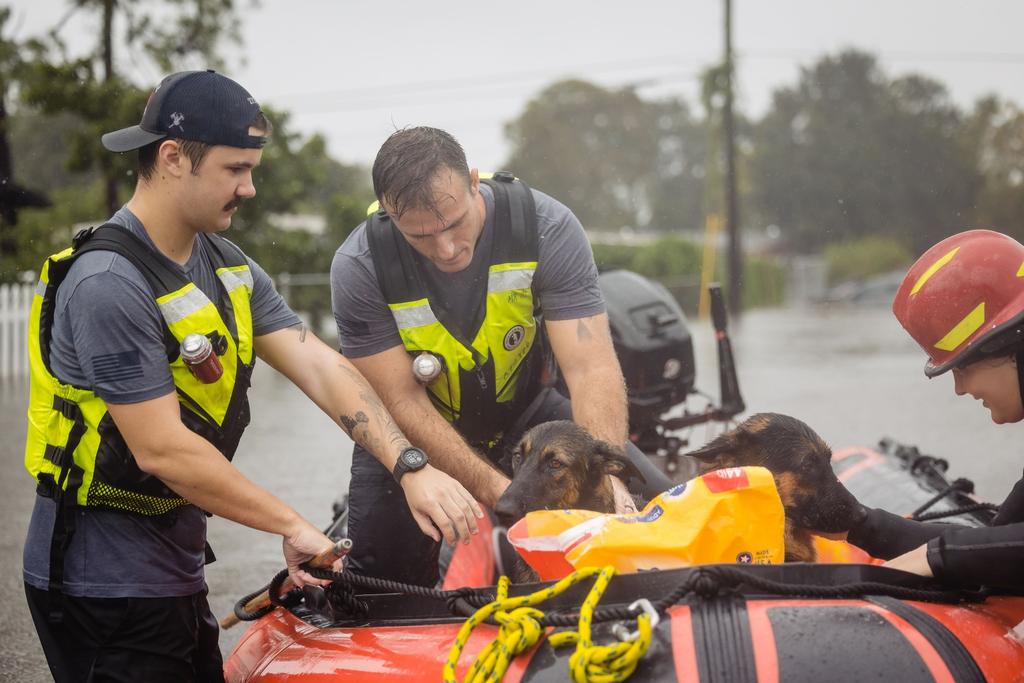 The chronicle of havoc due to Hurricane Ian upending much of SW Florida demonstrates dire circumstances and the first responders who champion search and rescue operations plucking people from unimaginable ruins. In the mix are survivors’ animals, scared and confused by the tumult, but saved by the caring hands of public safety pros.

Thankfully, our nation is robust with humans expanding their families with one or more pets. Many folks consider their animals dear, caring for and loving them as if they were children. Imagine one or more of those heart-warming and joy-providing pets going missing, during a natural disaster, and the search seems bleak due to unimaginable forces separating animals that are scared out of their wits.

I’m certain many people in these circumstances feel responsible and torn by it all, pondering how life will never be the same…

Until first responders come across loose animals, garner rapport, befriend them with a dry ride in a cool cop car, and figure out the recourse: Identifying pets’ owners to return them home.

NPA has been displaying boots-on-the-ground operations; the following material takes heartrending glimpses at the many episodes of first responders saving animals in the wake (some in the literal sense) of a monumental natural disaster.

Mandated by laws, pet owners are responsible to register their dog and receive a license in the form of a serialized charm, which generally gets latched to the pooch’s collar clasp. Additionally, many folks have their animal “chipped” by implanting a tiny node under the pet’s derma. Electronic readers scanning the animal’s body hit upon the chip which conveys data, most importantly the animal owner’s name and address to return the pet.

Some police departments which have in-house animal control officers may purchase some of these chip readers, equipping their field personnel with the real-time, hands-on capacity to determine the next step.

Otherwise, law enforcement personnel go out of their way to locate an animal facility to have the animal scanned for embedded chips; I’ve never learned of one that did not have a chip reader.

Amid the gargantuan gushes of seawater pushed inland by Hurricane Ian’s fury, many animals were pushed/pulled away from their environments.

Amid those same gargantuan gushes of seawater are hypervigilant first responders on many means of navigation, pulling several animal species aboard search-and-rescue boats, high-water rescue vehicles, dinghies, or plain ole wading in the depths flooding streets.

The animal rescues in the Sunshine State are unique ones most would not readily recognize if it were not for a bona fide disaster…typically non-profits doing the best they can with modest resources to sustain animals without homes.

Personnel from the Hope Animal-Assisted Crisis Response organization are present in the region slammed by Hurricane Ian, helping first responders not only reunite found animals but to also cater mental equilibrium via therapy dogs, just like they did at Ground Zero in 2001.

Nationally known, the ASPCA is involved, serving as a conduit for cops who come upon stranded pets:

“We’re on the ground assisting with urgent animal relocation and disaster response efforts in the wake of Hurricane Ian. The ASPCA is always on call to assist with natural disasters or cruelty situations where animals need immediate help.”

(Photo courtesy of the ASPCA.)

Any animals found by law enforcement officers are first attended to with food/water before feeling for dog tags in the hopes an identifier exists to swiftly facilitate the animal back to the rightful owner. If medical treatment due to whatever reason (hurricane fury, etc.) is deemed necessary, cops transport critters to on-site veterinary services. On that note, a dog seemingly exhausted and breathing laboriously can be readily tended to by our brothers/sisters in the fire/rescue services realms, specifically providing oxygen systems made just for furry creatures.

In a prior article, I referenced a coastal university in Fort Myers whose campus became a sudden swim site for three separate sharks which apparently surfed in on Ian’s shoulders. The conservation cops with the Florida Fish and Wildlife Conservation Commission (FWC) responded to these three sightings and exercised due care in locating and coaxing the sharks, ultimately ensuring each returned to the place without light poles and public waste receptacles and parking meters: The ocean and its quick-swirling tides.

Not so quick or swirly are large tortoises. Two were found by Lee County deputies, loosely roaming the saturated streets. The two identified as Galápagos Islands turtles —yes, the anomalous far-away land inhabited by some unique species of animals said to exist nowhere else on the planet— washed up and into the hands of animal rescuers with Lee County Domestic Animal Services who, in turn, enlisted Lee County Deputy Jim Vanpelt whose turtle-sitting duties made the media.

Law enforcement authorities nowadays are avid users of social media, with good reason. The online post of Deputy Vanpelt and the tortoises were recognized by an area resident and engendered the following backstory:

“A family would not leave Sanibel [Island] because of their tortoises…the family safely were rescued but on the news they said their tortoises were washed away. Praying they are reunited with their family pets.” Sure enough, deputies made the reconnection.

Do police officers have to generate any record for such unorthodox things? Well, yes and no…

They may not have to, but the oddities out there compel documentation in a general information report (different than tangible animal abuse investigations which are contained in criminal report affidavits).

My agency often documented loose cows corralled off roadways, recording any ear tag and/or branding identifying the animal and to which farmer they belonged. The contact info is stored in police dispatchers’ CAD systems as well. Invariably, we had repeat offenders that somehow strolled beyond fenced-off tracts of pastureland.

Scared animals typically indicate fear of people they do not necessarily know, exhibiting standoffishness and gestures resembling hesitancy to trust. They have no concept of the good guys versus the bad guys. The uniform does not register. But food usually does.

Hence, police agencies aggregate dog and cat food informally, for instances whereby some coaxing is among the steps taken to rescue animals and reunite them with owners.

For potential animal rescues, many cops purchase animal vittles with pocket money of their own. Some departments are fortunate enough to receive donations from animal food manufacturers, local distributors, and churches embracing the animal-rescue mission.

With food made available by any number of sources, law enforcement personnel can commence the path to bonding with animals, subsequently finding where they belong.

Generally, police agencies receive calls from people harboring hope that a cop found their dog. Makes sense: citizens readily know police officers are not only on duty round the clock but out there where an animal will roam for sustenance. It is very common on midnight shifts whereby patrol officers covering their assigned sector may very well come upon one or more dogs throughout the night.

On police property, we had a section of kennels accessible to law enforcement personnel. When a loose canine was located, our officers tried to garner rapport, offer kibble (freezer bag in the trunk), provide fresh water, and hopefully befriend the animal enough to coax it onto the pre-jail seats.

Sometimes the calls mentioned above pan out where we do have their dog in friendly custody; the contingent of police dispatchers (at the same police property as the kennels) took turns looking in on and feeding/watering/walking these “best friends.”

For those dogs whose owners we were unable to identify, any of our police personnel would volunteer to foster the dog at their home, on their dime, while still digging for a potential owner…before their home became a permanent home.

Law enforcement tends to be animal lovers to a deep degree. On that note, it is easy to become elated when witnessing the police profession somewhat less ambivalent to open up about the heavy hits brought about by catastrophes weighing LEOs down, compounded by gobs of hate from folks direly lacking the principles of police work, unrelentingly criticizing.

Whether in the form of directly receiving professional counsel or generally taking advantage of any among a variety of dog breeds within the department’s therapy units, police personnel of all stripes kindles the infinite nature of animals that offer acceptance with zero conditions attached.

(Photo courtesy of Beau the Therapy Dog and the Lee County Sheriff’s Office.)

It is not surprising that an increasing number of law enforcement agencies are adopting therapy dogs among their cadres of cops.

And it is not just dogs that get to be the mascot, of sorts. Cats have garnered attention in police agencies also, some resulting in reciprocal saves.

In the Port Lavaca, Texas police department, there is a mini-me of Garfield and his sharp personality loosening up the police troops and depositing smiles on the faces of the staff. Dubbed the police mascot, his name is “Captain.” And “he does different things with different officers at different times,” explained Port Lavaca police Chief Colin Rangnow:

At the Hillsborough, North Carolina police department, a disturbing backstory resulting in cops saving an animal wound up with another police agency adding a mascot named “Mercy Meow.” Listen to this story which explains the cat’s name (synonymous with “officer discretion”) culminating in a force multiplier among all badges:

So, animals do as much (if not more) for us as we think we do for them.

Even though our title today attributes to cops saving animals, maybe it tilts more toward animals saving cops.

Lord knows animals save us just as much as we do them.