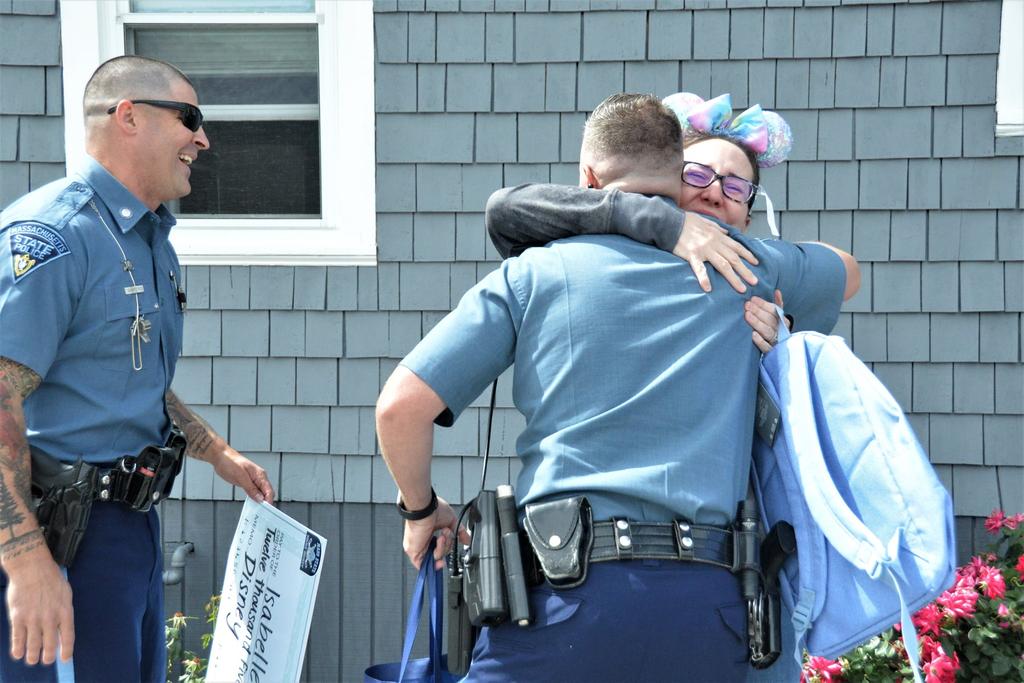 The bizarreness of the defund the police movement depriving law enforcement officers of necessary resources to ensure public safety may have emboldened some among America’s populace…but it certainly has not impacted the ongoing nature of cops paying it forward.

Let’s look at a mere few of the many recent examples (un-mysteriously absent on the pages of mainstream media outlets, because that would ruin their nefarious narrative and revenue potential from strange fiction).

The glee you see in our cover photo stems from a few Massachusetts State Police troopers hand-delivering one of those large cardboard checks in the amount of $12,575. to a family whose child is afflicted with a brain tumor and undergoing radiation treatments.

Although children’s dreams are often fulfilled by the Make-a-Wish Foundation, it seems COVID has impacted the Foundation to the extent they are unable to extend grants due to fiscal constraints.

Cops are keen observers of things, criminal and otherwise. Thus a few cops gleaned a child’s wish, activated their relative ability to make it come true, and delivered. Via the Massachusetts State Police website, this poignant nugget is revealed:

“Meet Isabelle Rose Finnemore. Isabelle is a beautiful and active 9-year-old girl born in Quincy. She is a role model and big sister to Lily and Emilia.

“Last March Isabelle was diagnosed with DIPG, a cancerous brain tumor, which affects approximately 300 children each year in the United States and has a survival rate under 10% at two years which drops to under 2% at five years.

“Isabelle’s dream is to go to Mickey’s Not-So-Scary Halloween Party at Walt Disney World in Orlando, FL. Unfortunately, Covid-19 has affected the Make-A-Wish Foundation and other charities from helping families in need.

“A few weeks ago, Troopers Steven Valair and Phil Giardino, who volunteer their time to run the MSP Memorial Fund, heard Isabelle’s story and knew they needed to help. Shortly after, Phil and Steve posted a story on their @msp_hockey Instagram page to help raise money to make Isabelle’s dream come true. Within 72 hours their followers heard Phil and Steve’s message loud and clear and raised over $10,000. By the end of that week MSP hockey had raised a total $12,575.”

There are viable reports of possible onions in the area, so prepare and read on: “Today, Troopers Giardino and Valair surprised Isabelle and her two sisters with Disney, Mickey & Minnie Mouse, and Frozen related toys, dresses, and dolls… Wondering why they were receiving these themed gifts, the family quickly learned they would be spending a full week in September at Disney World!”

This gem of a gesture is that “over 300 people who made donations at the MSP Hockey page” helped make this young girl’s dream come true, and she gets to enjoy it all with her family, compliments of cops who care and set good-natured movements in motion.

While police defunders seek to take, these cops pay it forward…from their own dole.

Having been a cop, I can attest to many bittersweet moments experienced during many duty days. Certain matters among police officers remain indelible, often deeply rooted with a fusion of human tragedy turned into plausible potential.

In the context of our topic today, paying it forward is not always underwritten in terms of monetary means but also of humanitarian currency—just being present, listening, providing organic solace during the worst of times.

With that in mind, we observe a Kansas City, Missouri cop who displayed the tried-and-true modality of getting down on the level of a child, in this case with a youngster whose loved one was just murdered.

Honorable mention to whoever took the above photograph, but deep respect for that patrol officer who took to the ground to pillar a child whose mind may have been mired in utter confusion and whose young heart was likely containing untold pain.

The Kansas City, Missouri police cited the following description to explain the circumstances surrounding the image above: “Few people realize all the resources we allocate to both homicide investigations and working with those affected by them. Earlier this week, three unrelated homicides occurred within an hour of each other. One was at 52nd and Euclid. Officers encountered this family member of the victim. In this photo, the boy was eating pizza and showing the officer video game YouTube videos.”

Indeed, “few people realize” phraseology more than hints at utter depletion and anemia law enforcement agencies endure from impacts of police defunders and law enforcement abolitionists. No need to delve any deeper into the horrid subject matter other than to reiterate it defies logic.

Although the material I located didn’t clarify if that young boy knew of a family member’s homicide, it remains evident that police on scene, especially the one depicted, had enough foresight to shoulder that child, regardless. How I measure it as a retired police officer, that Kansas City cop forged a friendship full knowing that the youngster will need to fall back on recent experiences from which to derive pillaring when enduring dire heartache (knowledge of a parent’s death), and that a man in blue was there for him.

With all the highly concentrated activities which must be allocated to the worst crime in the books, the enormous gravity and toll, fostering the welfare of a child or children involved is paramount. A cop in the drive-thru at McDonald’s, paying it forward by picking up the tab for the motorist behind them, may understandably have a faded memory of such a generosity. This policeman (and this young boy) will have such an experience seared on the brain and pulsed through the heart…infinitely.

Notice the policeman’s cruiser is parked in a way to block street traffic, indicating an active crime scene. Although the word distraction most often has negative connotations, in this case it serves well. And, as the Kansas City police administration conveyed, the boy’s sharing of YouTube gaming videos was a portal opened by a child, granting access to a cop he never met, materializing in a symbiosis during grievously disheartening circumstances. Sometimes paying it forward results in mutuality, whereby each party is equally valued and cherished in the moment and thereafter.

The irony I found from this particular example of cops paying it forward is that the first social media comment under this story is this: “I pray they don’t take the funds for those resources away from you!”

Indeed, we pray for sober minds in the context of politicos intoxicated on egos fueled by knee-jerk emotions denying reasonableness toward common ground and mutual understanding, specifically the public safety mission in our constitutional republic.

Sober minds, for sure.

The echoes of one of my favorite police academy instructors often reiterated a cop’s conventional purpose: “See a need, fill that need when you have the ability.”

Demonstrably, police officers on patrol invariably come upon many stranded motorists dealing with mechanical difficulties. Often, they require a tow truck. More commonly, though, their engine simply needs a little TLC to return to the road. One cop was positioned to do exactly that.

The person who recorded that photo wrote the following, which largely lends to our discussion: “I literally watched this police officer buy the anti-freeze, pour it in, make sure it was running correctly and trailed her to her home to make sure she got their safe because her husband couldn’t get to her. I know this officer didn’t know I was recording this. I asked, ‘Do you mind if I post this?’ He said ‘No,’ then he said, ‘I know you, I’ve seen you!’ I said ‘Yep, we’re trying to make it better for both of us.’…. Salute to the ones in Blue who do the right thing being on or off video.”

As portrayed, child witnessed the good-hearted nature of a police officer, and that same child is not likely aware that some arrogant persons wish us to believe cops are the problem.

Speaking of age, one demographic in our society which can often benefit from the knowledge that someone who cares is there for them is our elderly community. Senior citizens communing in retirement homes and assisted living facilities and nursing homes are often enriched by visitors.

I caught wind of a relative routine conducted by some Tampa police officers who schedule time with senior citizens to simply chat over coffee or whatever.

On Friday, several Tampa cops were observed “taking a minute to have some coffee and conversations with a few residents at Brookdale Senior Living in Tampa.”

Even though law enforcement agencies across the country maintain Coffee with a Cop programs involving citizens and police officials convening over coffee at a pre-determined business serving the hot stuff and pastries, infirm seniors may not necessarily endure such a trek easily enough. So, accordingly enough, cops come to them wherever they may reside, in organic communion. In essence these cops regard grace and humility to meet needs of others, needs more important than their own.

I suspect elders see it the same way, so everyone is a benefactor. These faces paint that exact noble notion.

Thinking of others and not themselves is the mainstay of cops everywhere and, as we stated above, paying it forward is merely an expense of time and thoughtfulness, not necessarily currency.

My police department’s Crime Prevention Unit made a practice of visiting senior citizens in facilities, and I happily joined in the mix between calls while on duty. What I often found was that these fine folks just wanted social engagement and to talk about whatever comes up—fundamental human experience. I also found their wisdom far more useable than any I may have exchanged among the circle amid visiting hours.

Human decency 101 always prevails, and those who seek to deprive police of funds also, by extension, negate the importance and values of human interactions, especially for those who may have elder-based limitations engendering fulfillment from those who meet them right where they are at, the typical cop’s covenant.

We are starting to see the tides turn—more elaborate coverage on that in a subsequent article.

The brothers and sisters who comprise our nation’s law enforcement community continue the mission on everyone’s behalf. They continue the street battles. They maintain composure under constant heft of political pressures demanding unrealistic policing methodologies. More than ever they are subjected to being sacrificial lambs under stupid policies having zero practicality or humanism.

In the interim, continue to back the blue…which pays dividends for all.