Skip to content
Simply Have a Conversation with Cops 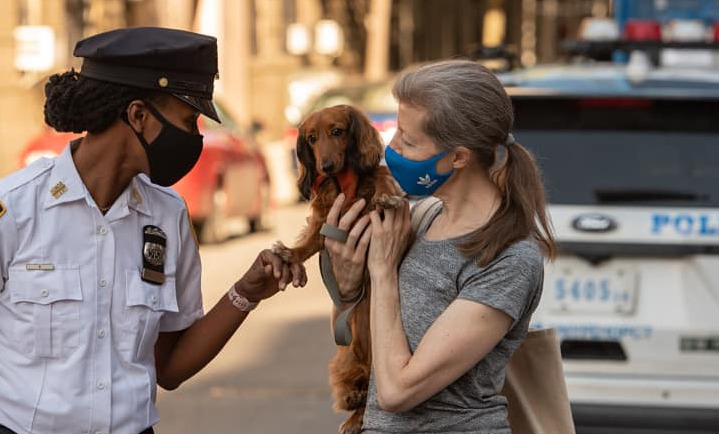 Why can’t we just stop for a moment, greet one another, and have a conversation about…whatever?

It’s what cops are especially positioned to do during the course of duty.

It’s what citizens are equally availed while going about their everyday lives.

Communication is always key—and I’m not even remotely referring to mainstream media, because that is nothing more than propaganda plunged to hungry viewers who swallow sensationalism with vigor, unquestionably.

No, I’m referring to two or more people exchanging ideas and sharing mindsets with the mature openness to consider varying perspectives.

And like I mentioned, a chat could be about anything at all, not necessarily containing any political bents whatsoever.

Those were the moments I cherished most as a cop: connecting with people in passing, exchanging salutations, well-wishing, buffing a purpose-driven life.

As my police chief recently iterated, “Goodness is truly desiring to help others. It doesn’t approach or entertain sin. Goodness does the right thing and challenges other people to do the same, even if the conversation is uncomfortable. It is decent, honest, moral, honorable, virtuous, and full of integrity. Good people don’t just do the right thing; they make things right.”

When I was a kid growing up, the NYPD cops walking a “foot post” while skillfully swinging a wooden “night stick” as they strolled down the “blocks” (streets in NYC parlance) was a recurring Norman Rockwell-like scene. The neighborhood young ones, me among them, would excitedly flock to the “beat cops” and exchange organic chatter.

Naturally, kids were awe-inspired by the presence of a law enforcement officer.

“What does that do?” was the recurring question from any one of us asking about a cop’s duty belt array of equipment.

In turn, the police officers would banter with us kids about favorite baseball teams and football teams and the respective players we individually idolized. That was back in the day.

Nowadays, many of the sports figures seem more like pushy self-interested lobbyists than athletes for youngsters (or anyone) to justifiably revere.

Most often, these street-beat cops would inquire of each of us kiddos how we were doing in school. That says much about law enforcement officers invested in their community and the vitality of all the people living in it, especially future generations. (I was raised Catholic and taught by only nuns, so it was impressionable that cops always asked if my grades were good, especially since I knew it was necessary to become a cop one day…just like them.)

Similarly, aside from stopping and taking the time to chill with the children, cops glean insights from parental units and merchants along the beat. It was always informal intelligence-gathering, which serves every individual in the community better when they correspond their concerns and knowledge base pertaining to their particular locale. Broken Windows Theory was a hit!

I was reminded of these dynamics when I came upon a revelation from a citizen in Indianapolis, Indiana who shared an impromptu exchange he experienced with a city police officer who gifted him with a steaming cup of coffee…after which they simply had a conversation. This encounter illustrates a chance opportunity evolving in pure gold humanity, punctuated by sharing a moment between two strangers spontaneously forging a friendship.

Thanks to the staff at the Indianapolis Metropolitan Police Department (IMPD) East District, we witness an exchange between citizen and cop, a poignant reminder which girds our topic today. In the IMPD Inbox they received the following accolades:

“Thank you, Officer, for buying my coffee today and simply having a conversation.”

Indianapolis Police administration described the scenario: “Pictured you see an IMPD East District Shift Officer and a citizen who goes by [the name of] Tony ‘The Concrete Man’…the two met randomly at a local Eastside coffee shop…struck up a conversation, and the officer ended up paying it forward by purchasing Tony a cup of coffee…

“Tony was thankful for the cup of coffee but more thankful to have a simple conversation with one of Indy’s Finest and wanted everyone to know that Police Officers are regular people too…and he knows that if needed the officer would help him without any question.”

The revelation of a chance citizen/cop moment continued: “Thank you, Tony, for sending us the picture…we are glad that you were able to make a connection with this officer. Officers make connections with citizens daily, through actions as simple as this…just striking up conversation in line at a coffee shop. Job well done, Officer, connecting with the citizens we serve.”

That is a capsule of thousands of similar exchanges between cops and citizens transpiring across our beloved nation throughout every single day. That may not necessarily be newsworthy to mainstream media moguls slopping together sensationalistic sagas for clicks/profit, but it is pure gold to everyone else focused on the currency of poignancy and humanitarianism.

Despite pandemic lockdowns and a shaken planet, bonding never went away. Cops took to Zoom and interacted with constituents in varying regards (online book-reading for students; seniors at nursing homes, you name it…they were connected virtually).

Despite mainstream media force-feeding lies about police culture and hyperbolic narratives igniting racism claims, folks of all walks of life always possess the natural capacity to critically think for themselves and derive sound reasoning regarding how, where, and with whom they wish to prosper in life.

Despite the political platforms pandering to evil ideologies and demagoguery, citizens can still use discernment and decide for themselves who is real and who is a hollow puppet.

Despite the activists and movements demanding everyone buy in to their respective choices, why not mutually respect the ideations of others, even though they may differ?

Again, communication is key and often quite simple, just like Tony the Concrete Man and the Indianapolis cop exhibited.

Considering a positive note (literally and figuratively), a Chisago County Sheriff’s Office sergeant refueling his cruiser was provided a hand-printed communication from a young girl, demonstrating today’s topic to the letter.

That is definitely a simple gesture buttoning up a chance conversation of sorts between a law enforcement officer on patrol and a citizen who organically prepared to share humanity at the first opportunity of police presence (as indicated by how she wrote the opening line).

“Last night I stopped at a local gas station to fuel up my call-taking chariot, when an employee came running out with a piece of paper in her hand. I assumed it was information about a gas drive-off that occurred or something… She handed it to me, and I asked her what it was. She said it was a letter and mentioned how she appreciates law enforcement. I thanked her and she ran back into the store.

“I didn’t get a chance to read it right away as I literally encountered and arrested an impaired driver within seconds of leaving the gas station. But as my shift ends this morning, I was able to take a look at it.

“Taylor, you have no idea how much I appreciate this kind gesture. This is the stuff that keeps us going day after day, knowing that our community supports us…thank you!”

Just like that, simple as simple can be, two people connected, spreading gestures and kindness to one another. A brief chat complimented by a hand-made Hallmark benefitted at least two people in that one nugget of time.

Once upon a time (May 27, 2021, to be exact), there was a young high school student whose mind may have been on the next day’s graduation. While driving, young Quintin Montgomery found himself in a fender bender…with a sheriff’s deputy. He couldn’t stop in time and unfortunately crashed into the rear of a fully marked Hillsborough County Sheriff’s Office (HCSO) cruiser driven by Sergeant Kara Vance.

Like any law enforcement officer would, Sgt. Vance exited her patrol cruiser and ran back to check on Quintin, making sure he was uninjured. He was just fine, though a tad on the nervous side.

As an HCSO post explained: “Sergeant Vance said luckily he wasn’t injured either, but he was panicked.

“Quintin thought he was going to go to jail for rear-ending a law enforcement deputy. Sergeant Vance sat with him for a while to comfort him and, of course, tell him that he was not going to jail.”

Then it got poignant: “Eventually the two chatted for so long, Quintin ended up inviting Sergeant Vance to his graduation, which was set for the following day. It was an offer she said she couldn’t turn down! She attended to make sure he was still doing okay and congratulate him!”

The spontaneous car crash involving Quintin and Sgt. Vance turned out to be a bond which went even further in the lives of both and also parlayed to Corporal Andrea Davis attending too—the more the merrier.

Here’s a brief video of what played out at the crash scene on Interstate 4 in Tampa:

How cool that is!

That is much like a recent article published here on NPA. A piece titled “Surrogates at Fallen Cops’ Kids’ Graduations” displays cops showing up and standing in support of youngsters whose academic achievements deserve the honor of pillaring (even though it is uniquely performed in the stead of LEOs killed in the line of duty).

In many towns and cities there are planned gatherings at pre-established area businesses under the police program known as Coffee with a Cop, whereby local cops and citizens talk it up over coffee and pastries, about whatever is on the mind. My department uses this high-value program with constant dividends for all participants: we garner a better pulse of community while citizens receive a deeper understanding of all it entails to operate a successful police force on their behalf.

In efforts to cover all bases of messaging, we even had a few cops who were trained in American Sign Language (ASL) for when the need arose, helping communications with citizens who were hearing impaired. Although advanced training classes for cops are availed daily, ASL is not one of them; our police officers paid out-of-pocket to learn ASL and use it in the field.

Chief Partridge explained it: “One-on-one conversations between citizens and the Chief of Police and Officers are the best way to build trust and two-way communication for communities. Events are relaxed, informal, and open about the issues community residents feel are important.”

With specific curriculum availing police training, techniques, equipment utilities, and practical skills to effectively succeed the police mission, many agencies around the country offer a Citizens Police Academy concept whereby, as the name implies, constituents are invited to attend a few condensed nuggets of time at which cops impart the who, what, where, when, why and how LEOs perform duties toward public safety in our society.

Whether spontaneous or preplanned, exchanges between community members and their cops are tangible, offering moments of organic dialogue toward meaningful purpose and mutual respect and understanding.

Anyone seeking to strike up a convo with a police officer and forge friendships, there are roughly 900,000 uniformed men and women proudly serving across America, and each of them harbors heartened reciprocity… Just ask Tony “The Concrete Man.”