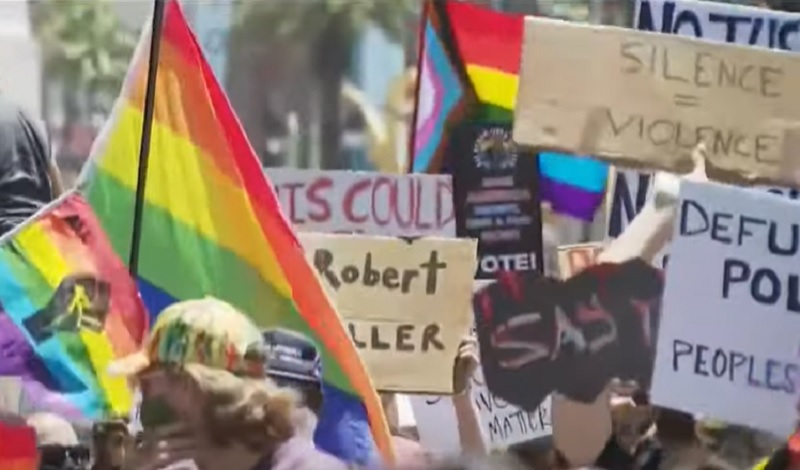 Projection or transference is debilitating both for the projector and the target. When used to further demonize cops, it’s devastating for American society. I’ve often thought about the projection the Left uses to attack the Right. The Left accuses the Right of doing what they are doing. But there’s another form of projection, not necessarily nefarious, but which can also be debilitating.

I came in late during a recent KTTH Radio show, recently. Host Jason Rantz was interviewing a gay Seattle police officer, whose voice I told my wife I thought I recognized. Then Rantz said the cop’s name, and, yes, he’s a friend and long-time co-worker, Sgt. Doug Raguso.

The discussion was about how “shocked” and disappointed he was because Seattle’s Capitol Hill Pride (CHP) parade this year has banned cops, including gay officers, from participating in their activities during their June 26-27 festival (New York Pride has done the same to the NYPD). They cited concerns about “white supremacy” within the police ranks. Some comments are so oblivious, we cringe at the ignorance and manufactured hate. But this is just a part of the Left’s debilitating projection syndrome.

How convenient, right? Change the definition of white supremacy to include something ubiquitous, such as, oh, I don’t know, maybe, like being a Republican, conservative, or even worse, a supporter of President Trump. Then attack your political enemies as “white supremacists,” which dehumanizes them.

And though the CHP is banning police from participating in the festival, they nevertheless requested “police protection from the perimeter.” About this hypocritical request, Sgt. Raguso finished the thought, adding, “in case someone treats you as you have us.” Mike Solan, president of the police union called the decision “’disgusting, bigoted, discriminatory,’ and contradictory to the ‘inclusive LGBTQ message.’”

From what Sgt. Raguso said, the average person in the gay community does not endorse this radical anti-cop view, but they’re not the ones making decisions. Then the sergeant said something that should be poignant for members of the gay community. He talked about the struggle gays have had from before Stonewall to today to gain community tolerance and even acceptance. He commented on the irony of a gay organization refusing to tolerate or accept gay police officers. And I’ll add, who risk their lives and safety for the entire community.

Previously, Rantz also interviewed a local sheriff’s deputy, Nic Abts-Olsen, who made some equally salient points. He was talking about his own projection about the police when he was thinking about becoming a cop. He said he had all kinds of fears, apprehensions, and misconceptions about how the cops would treat him or not accept him. Fortunately, it was not debilitating for him, and he became a cop.

He said he experienced no problems at all. His fellow officers accepted and treated him with kindness and respect, and he’s made many friends in his department. He said the problem wasn’t the cops. The problem had been his projection about how he thought other cops would treat him.

Generally, law enforcement officers are a tolerant lot. Think about it, they deal with every kind of person you can imagine, good and bad, often, not on their best days. Cops swear an oath to enforce the laws and uphold the constitutions of their state and the nation. To do that, officers must base law enforcement on a person’s bad actions, not on a person’s personal characteristics.

Every officer in America has stories about helping people they dislike and citing or arresting people they like. That’s a part of an officer’s job. Many people today, especially on the left, despise anyone who disagrees with them to the point they could never be as objective as a cop must strive to be. So, projection. They project their own biases and limitations on the cops and then act according to the myth they’ve created rather than to the reality they ignore.

I recall an assignment to a protection detail for a governor of our state. It was a high-crime area, so we were augmenting her state trooper detail while she spoke at a new high school music hall dedication (named after Quincy Jones who went to the high school. Yes, he was there too, which was way cool. Okay, end of fun facts).

I not only disagreed politically with nearly everything that governor supported but also believed she (the Democrats) stole the election. James Joyner at outsidethebeltway.com explains it here. If you’re disinclined click the link, just suffice it to say the Democrats lost on election day, lost on the first recount, lost on the second recount. But, after the third recount, having finally “found” enough votes, the Democrats got everyone to stop counting.

Anyway, none of that precluded my protecting the governor because it wasn’t just me, as an individual, protecting her. It was me as a representative of my community, civil society, and the rule of law. Who cares if I don’t agree with or like someone? It was my job, my duty, and I took it seriously. In fact, I’ll bet there are many people out there I’ve served who, if you asked them, had no idea I didn’t like them. Because that is irrelevant.

Back when I was assigned to the East Precinct community police team (CPT), there existed a group called the Q Patrol. They were a civilian community crime prevention group (similar to the Guardian Angels) comprised of gay members. In the mid-90s, I was a part of an effort by the SPD to instruct the Q Patrol in Mountain Bike patrol tactics. Apparently, this was the first instance in the U.S. where a police department trained a gay civilian group to patrol on bikes. I suppose today’s Capitol Hill Pride leaders are too wrapped up in their hateful projection to recall that effort.

In fact, after noting that the previous incarnation of the Q Patrol worked “alongside police,” they proudly announced a “new Q Patrol” will work “without the Seattle Police Department.” What a shame.

And, as I close, as if on cue, Rantz just announced breaking news, which further demonstrates debilitating projection. A Seattle Department of Finance and Administrative Services (FAS) senior management systems analyst, Daniel Holmberg, issued an all-staff email titled, “White supremacy thrives without consequences” [in the SPD].

Rantz wrote, “Under the heading ‘Black Lives Matter,’ the email excoriated Seattle cops as serving ‘the false gods of white supremacy,’ called them ‘mercenaries and zealots,’ and argued they are ‘paid in the wages of white privilege.”

He added, “The email itself isn’t just offensive; it is legitimately unhinged. It reads like a manifesto from a violent radical.” It does.

Rantz also said the city is supporting the email.

So, now, one obvious question: Who are truly the bigots?