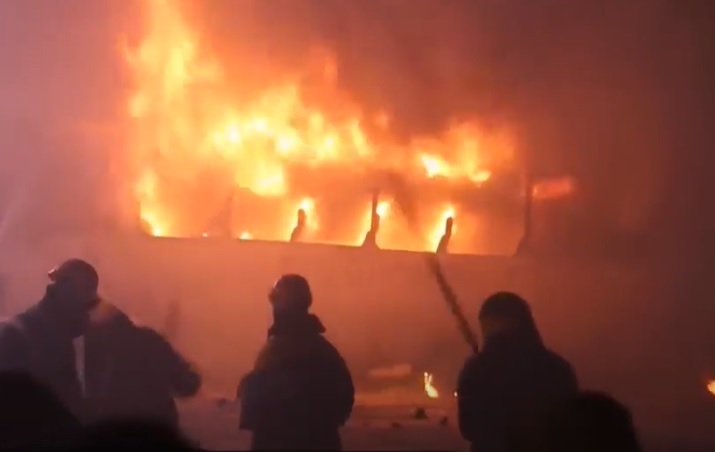 Well, first, we may as well get this distraction out of the way. Since sources for this incident were abundant, I selected one at random. It was an AP reprint at Newsbreak.com. I didn’t even need to see the byline because the biased description of the incident betrayed the culprit’s “journalistic” identity.

Here’s what happened. A 20-year-old [19 at the time] man from Alaska (I prefer not to give him publicity), was charged in an attempt to trap police officers inside and then burn down the Seattle Police Department (SPD) East Precinct.

The man set fire to trash piled up against the building, while his accomplices used crowbars and quick-drying concrete to seal the doors shut, so officers could not escape. They also destroyed an electronic key card reader, so people [perhaps firefighters attempting a rescue] couldn’t get into the building.

How did the AP describe this organized act of evil? “A federal court judge sentenced a 20-year-old Alaska man Monday to 20 months for trying to set fire to a Seattle police precinct during last summer’s racial justice protests….” Not BLM/Antifa riots but protests. Oh, man… can I gag now. This was the infamous SPD East Precinct of CHOP/CHAZ infamy, my work home for over 20 years, which sounds like a much more appropriate sentence.

But the AP isn’t the only one downplaying the violence. Acting Seattle U.S. Attorney Tessa M. Gorman issued a news release. She provided the arsonist, attempted cop-killer with cover in her description of events. Remember, Gorman works for Joe Biden who insists on calling the Capitol riots on Jan. 6th the, “worst attack on our democracy since the Civil War!” And, whose DOJ has kept, essentially, trespassers in solitary confinement for months. Even Sen. Elizabeth Warren (D-MA) referred to this treatment as “cruel.”

Gorman wrote, “A handful of people bent on destruction, by committing arson and threatening the safety of our community, also drowned out the important message of those who peacefully protest injustice.” Oh, man… I almost wrote a bad word, after reading that slop. How hypocritical of anyone working for the Biden administration, which has ignored, even encouraged, left-wing rioting.

Then again, Gorman is acting in the same position Seattle Mayor Jenny “summer of love” Durkan held when she helped inflict a bogus consent decree on the SPD, which is still in effect. A consent decree that is partly responsible, along with open animosity from city leaders and defund the police efforts, for the anti-cop atmosphere that has seen such a depletion of officers. Mike Solan, the police union president, fears the number, which is already over 200, may reach 400 officers who have departed by 2022.

The AP article finishes with this “heart-rending” description of an alleged arsonist and attempted cop murderer, “Prosecutors acknowledged that [redacted] had suffered mistreatment as a child and that he had mental health and substance abuse issues. But they asked U.S. District Judge John C. Coughenour for a sentence of just under four years, saying they had already shown leniency by reaching a plea deal that helped David-Pitts avoid a five-year mandatory minimum.”

This is the judge, who publicly “noted the serious danger the fire posed to Seattle Police Officers who could have been trapped inside the building,” gave him less than two years. Plenty of people have “sad stories,” but the vast majority of them don’t try to kill cops.

Once again, showing that the Left cares little for “mandatory minimums” unless they apply to “white supremacists.” Which, I’ve learned from the legacy media and Biden’s DOJ, are apparently spreading like (pardon the pun) wildfire. And are “the deadliest threat to the United States.” Right, that’s happening.

I mean, you can’t drive peacefully through downtown Portland, sit and eat dinner at the corner bistro in Pittsburg, or ride public transit in New York City without throngs of KKK and Nazis harassing or assaulting you. Oh, wait… those aren’t white supremacists; those are BLM, Antifa, and other leftist militants doing that.

So, he gets one year and eight months for trying to murder police officers by burning them alive in their precinct. And anyone who thinks the radicals couldn’t have been successful in igniting the building should look at the Minneapolis Police Department’s 3rd Precinct engulfed in flames. It was fortunate no police officers were trapped inside. But, make no mistake; if those violent insurrectionists could have trapped cops inside the burning building, they would have.