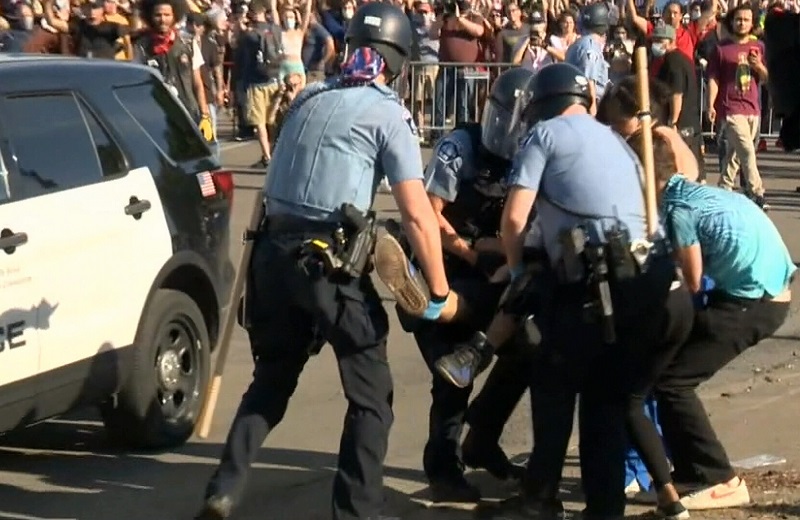 The left’s inability to engage in self-reflection is breathtaking as a recent headline in The Seattle Times demonstrated. “Police Misconduct is costing WA taxpayers millions. The trend shows no signs of slowing down.”

Seattle is suffering a true, though self-inflicted, policing crisis, but the anti-police newspaper forges ahead with its anti-police, myth-making ways.

The story was regarding Washington state law enforcement, but it could apply to any blue jurisdiction in the United States. These settlements have been happening for years, but anti-cop groups, politicians, and media have corrupted the causes of the large payouts.

It’s not “police misconduct…” that “is costing… taxpayers millions.” It’s city and county governments labeling good police work, “police misconduct” and then paying out millions of dollars to “victims” that don’t deserve it.

This appears to be the formula: An officer becomes involved in a controversial use-of-force incident. Investigators clear officers of any wrongdoing. Leftists pretend (loudly, sometimes violently) the officer’s actions were “wrong.” Then, regardless of the officer(s) being exonerated, or of any culpability on the suspect’s part, the jurisdiction will settle any and all lawsuits out of court.

“But in death, they represent a growing trend among those who died at the hands of police under questionable circumstances in Washington state.”

I’m not sure he even knows he did this, but the reporter bolsters my contentions with this paragraph:

“Lawsuits filed over their violent deaths resulted in more than a dozen multimillion-dollar settlements in 2021 as cities and counties increasingly decide to forgo civil trials and offer grieving families a kind of financial accountability.”

There you go. “Financial accountability.” Cities are holding themselves (or their cops) “accountable” for… for what? In most of these cases, there should be no city or police accountability for these incidents.

These payouts appear to be just another part of the multifaceted leftist scheme for “reparations” or “wealth transfer.” Why should a city or county payout cash to anyone once officers are cleared of any misconduct? And what do these paydays accomplish? Settling a case when officers did nothing wrong is demoralizing. And it encourages people to be litigious.

Consider a recent article I wrote here at NPA. Syracuse, N.Y. officers dealt with an 8-year-old repeat offender in a perfectly acceptable manner after he allegedly stole a bag of Doritos from a store.

The officers used no force, didn’t injure the child, and didn’t even arrest or charge the boy. Instead, the officers brought him home to his dad and explained (as they had in the past) what his son had done.

You’re probably ahead of me, but, yes… the father has gotten himself a lawyer. Again, for what? Because an officer chastised a boy no worse than he’d have probably done with his own son, if he’d caught him stealing. Stern in a way the boy’s father should have been with him a long time ago. And this was a boy the cops knew by name because they’d dealt with him for past criminal behavior.

Anti-police critics accused the officers of “traumatizing the child.” Right. The child was so “traumatized” that, reportedly, he’s now being investigated for a subsequent strong-arm robbery. That stern talking to must have really had an impact, right? Not so much.

The reporter writes “the number and size of settlement have grown….” He adds, betraying his robust anti-cop bias, “Nearly two-thirds of the total $100 million has been paid since the May 2020 murder of George Floyd by Minneapolis officers renewed outrage over unchecked police brutality and bolstered the Black Lives Matter movement.”

Don’t they have editors over there? He added “unchecked” to “police brutality” to make certain he sufficiently slimed police officers. “Unchecked” is his opinion because it’s not based in fact. In fact, the contention that “police brutality” is “unchecked” is a provable myth. If the piece were in the newspaper’s opinion section, then okay. But it wasn’t, and the Times tags the writer as a “staff reporter,” not opinion columnist.

The Times expects readers to believe the reporter is an objective journalist, providing his readers with an unbiased news story. Well, let’s see. I won’t go through every story mentioned in the article because they are all so similar. I should acknowledge some stories he cites may have involved officer misconduct. Maybe, but, after years of researching such incidents, it’s not likely.

For example, the reporter mentions the case of a suspect shot by police in Kent, a Seattle suburb. Readers are left with an inference the cops behaved wrongly but are given no details and only know police shot and killed the suspect. And it’s in a story about supposed police “misconduct.”

I chose this one incident at random to do a bit of research into this supposed “police misconduct.” I even used a leftist source. From that source, I learned police were investigating the suspect for driving a possibly stolen car. Instead of cooperating, the suspect fled in the vehicle, attempted to elude the police, leading them on a dangerous chase.

Instead of any consideration for what the officers faced, the reporter quotes the suspect’s mother. “No amount of money will replace a life.” She also said the monetary settlement was “insulting,” and “it was never about money.” The family settled the lawsuit for an insulting $4.4 million.

It appears the city paid out four and a half million taxpayer dollars to the family of a man who had apparently attempted to run over a police officer?

I would expect to find similar revelations if I went through the other cases the reporter cites.

In fact, I’m familiar with another case he mentions where Seattle cops shot and killed a woman. Reading this “news story,” the reader would never know, in that case, the suspect attempted to stab the officers when they shot her. This, again, leads to an inference of “police misconduct.”

There was one truly disturbing trend revealed by the article. The reporter mentioned at least two parents of slain suspects are now on the state’s Criminal Justice Training Commission. These are the folks responsible for running the state’s police academy.