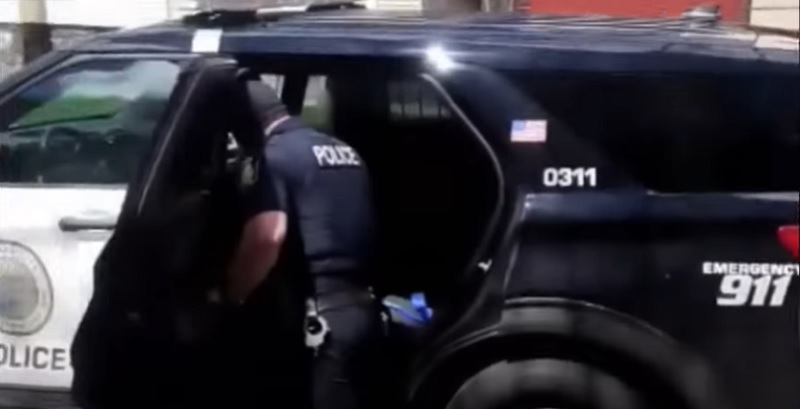 I love it when people believe they would have handled whatever police incident they are criticizing “better” than the cops. This usually involves mostly using their imaginations bolstered by a flawed belief they know more than the trained professionals.

I always like to ask cop critics what was the alternative? In this instance, police responded to a reported theft in a store—a shoplift—by little kids.

In this incident, some bystander video recorded about a minute of a much longer and broader incident where some cops are detaining an eight-year-old boy for shoplifting. NBC news downplayed the crime and overplayed the police actions. The NBC online edition referred to the cops detaining the boy “for allegedly stealing a bag of potato chips.”

He’s only eight, but does it really matter what he stole? If it’s only a bag of chips, it’s okay?

As you read the online story and watch the NBC news report about the incident, you gather the writer learned there was much more to the story than the boy stealing a bag of chips, but that’s the way they chose to frame it. Does that help police-community relations? No, NBC. It does not.

And about the kid crying, no adult likes to see a child cry. But the boy had a good reason to cry. He got caught by the police for stealing.

No police use of force, even just holding a little kid’s arm, looks good. But cop critics, media, and cop-haters in particular are exploiting the incident to promote their anti-cop narrative. They don’t want you to know the context.

They only want people to know about the one-minute video that supposedly showing cops “arresting” an 8-year-old boy, inferring handcuffs and a ride to jail.

In reality, according to the police chief and NBC’s report, the boy was seated in the back of a patrol car—without handcuffs—and driven to his home where officers spoke with the child’s father for about 15 minutes. The officer explained to the boy his dad had provided him a good life, and he should show him more respect.

Read that paragraph again, and tell me what’s wrong with the way the officers handled this incident? The kid wasn’t hurt, they didn’t charge him. People don’t like that an officer held him so he wouldn’t get away and spoke sternly to him. How else should the cops have handled it?

I can only think of one other way. Do nothing.

The officers could have arrived and told the store owner, “Sorry, we’re not going to enforce the law against theft for stealing from your store. Especially if the suspect is a kid because some people think it’s mean. We’re just going to let him go. So, in the future, if a kid steals from you, just suck it up and take the loss.”

Community activists and some politicians don’t want cops to enforce certain laws against certain people under certain circumstances. And these categories continue to expand.

Seriously, put the kid in the back of your patrol car, call his parents to come to you, or take him home to speak with his parents (something I’ve done countless times) or do nothing. Aren’t those the only options?

People need to be more reasonable and less emotional. Police work is messy. And it’s messier when people add to the mess by failing to give officers the benefit of the doubt. Believe it or not, cops really do know how to do their jobs better than untrained critics.

The NBC reporter made a great point when the anchor asked him if the police releasing more video (15 minutes of dash and body cam footage), putting the incident into context, will help with the public anger.

He said he wasn’t sure, but he also reaffirmed the cops did not use handcuffs, brought the boy home, and spoke with his father. The reporter said the cops knew the boy and his friends by name and said the cops had brought him home before for similar behavior.

This was the epitome of community policing, something critics often tout but don’t recognize when they see it.

The reporter seemed to lament the bystander’s one-minute video clip of the cops holding the crying boy had five million views. He said he doubts very many people will take the time to look at the police video for better context.

The boy’s father knew his son was riding his bike around unsupervised—at only eight years old. Then when asked about the incident by media, did the father show any embarrassment for what his child was suspected of doing? Did he convey he would discipline his child for his behavior? No, instead, he chastised the cops for “overreacting.” Oh, and he hired a lawyer.

The father said, about the one-minute video, “his son was treated like he killed somebody.” He also said his son was not a criminal. Well, his son stole property from a store. Was it the crime of the century? No. But stealing is a crime. So, if the boy did it, he’s a criminal, albeit a little one, who will become a bigger one, if he’s not held accountable.

According to NBC’s report, the officers said in the past they’ve contacted the boy along with other kids for committing mischief and other thefts in the neighborhood.

Were those cops being stern? Absolutely, but that’s what juvenile delinquents need, right? The nuns I had in Catholic school were “worse” than those cops—a lot worse. And I’d get it even worse from my mom when I got home from school for getting into trouble at school in the first place.

Nobody took my side. Why should they? I was the one who did something wrong. I grew up in a single-parent household. I didn’t need understanding. What I needed was to understand what I did was wrong, and it had consequences, so I wouldn’t do it again.

Marq Claxton, director of the Black Law Enforcement Alliance explained people holding up a cell phone and recording don’t know the whole story. He added cops don’t have the time to explain a situation to everyone at the scene. He’s spot on.

Gov. Kathy Hochul was more reserved than I expected, but she still delivered the radical leftist goods. She just had to exploit the incident by inserting a racial angle into the story.

She said, “It is… just the realization that black and brown communities all over our state and all over our country, they’re not shocked as others are to see this because they’ve been conditioned to different kind of treatment from policing agencies and others throughout their lives.”

Leaders (liars, whatever…) like her are what’s wrong with police-community relations, not the cops.