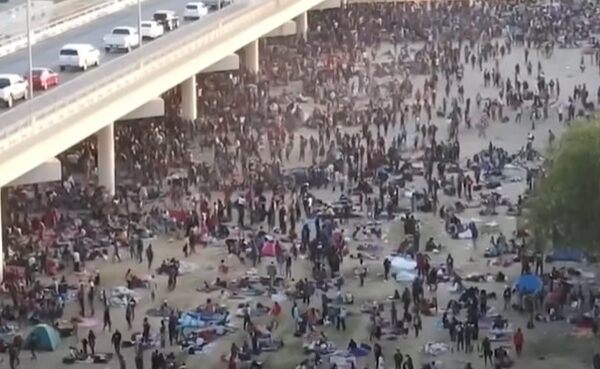 Alarmingly, the once-battened border security policy instituted by the current White House occupier’s predecessor continues to unravel and spiral out of control while nap time lapses longer at 1600 Pennsylvania Avenue (or its origami version), allowing unceasing gobs of unvetted migrants to enter the country illegally.

Thanks to the come one, come all liberal playbook, this self-inflicted wound is compounded by competing cartels taking advantage of a lackluster leader whose blind- eye, open-armed stance essentially facilitates the funnel of multi-million-dollar supply chains of narcotic poisons destined for American streets, impacting the increasingly abysmal overdose rates chronicled at our nation’s ERs and coroners’ facilities.

The staggering numbers of immigrants from various nations reportedly en route or already showing up at points on our southern border is mind-bending, as equally flustering as the white flag-waving president essentially signaling everyone from anywhere has a seat at the U.S. table—vetting be damned.

Crafty and violent millionaire scoundrels that they are, one of the latest southern border hoodwinks orchestrated by Mexico-based drug cartels involved a façade U.S. Border Patrol vehicle occupied by imposters dressed as federal agents carrying cargo of contraband destined for trade on U.S. soil. In addition to their violent tendencies exhibited during protection of their poisonous yet profitable products, cartels have a knack for resourcefulness and trickery in realms of transnational criminality.

Fortunately, the ruse was detected by overwhelmed yet acutely aware bona fide Border Patrol agents in the right spot at the right time. But, with more wall coming down thanks to Joe’s initiatives…and inadequate numbers of Border Patrol agents trying to head thousands upon thousands of migrants and cunning drug runners, how many more succeeded getting through?

Speaking of getting through, border-breaching strategies are seemingly being gift-wrapped and bowed.

Per Caroline Downey writing for the National Review, “Amid the worsening border crisis, the Biden administration has cancelled the remaining contracts for the border wall project spearheaded under the Trump administration.” That was published on October 9, 2021.

Notice at the end of the video you just watched, that U.S. Border Patrol union president Brandon Judd (“Let’s Go Brandon”) praised Republican governors for criticizing the Biden administration’s hands-off approach while extolling the absence of Democratic governors weighing in. Remaining in the middle of this utter mess are law enforcement officers seeking necessary resolve, party politics aside.

But, no, the White House rejected a Border Disaster Declaration.

While no-go Joe continues his casual nature regarding the border hemorrhage, leaving that unrelenting fester to his VP border czar —who has done plenty of cackling and zero czaring— the purportedly elected commander-in-chief seems more invested in unconstitutionality by mandating vaccinations for cops. Here is Pinal County, Arizona Sheriff Mark Lamb addressing both vagaries:

Astounding, isn’t it? “Got-aways” has been a much bandied-about compound lately. Speaking of compounds, the now-cancelled border wall contracts mean all the structural components —namely panels of steel— are rusting in Texas.

With federal agents playing a pseudo game of chess against highly financed and amply armed drug cartels calibrating moves on a monumentally geographic board, with lookouts communicating logistics (lack thereof) and moves along a seemingly endless expanse of wide-open terrain…an overshadowing of typical cat and mouse games casts darkness.

Now, though, the lack of border security personnel and logistical ops is exacerbated. Per an October 10, 2021, report in the Washington Examiner, several states which have dedicated their respective National Guard cadres and state police personnel to help outnumbered federal agents somehow block migrants attempting to breach our southern border had to revert home.

The unfortunate thing about this diminution of on-loan law enforcement reserves is that it coincides with the White House administration shredding the border wall construction contracts. These border wall structures are glaringly needed, especially at the positions where illegal crossings have been robustly active. As if Mr. President didn’t give us enough mind-boggle to compel head-scratching and raised eyebrows, perhaps accompanied by some salty language.

Then again, what else did we expect from the open-borders, anti-law enforcement party?

Despite the angst over the ongoing border crisis, credit to the state governments who supplemented the immigration efforts at the border, albeit in limited duration.

(Photo courtesy of the US Border Patrol Del Rio Sector).

It is true and evident that any sovereign government which accords a helping hand by affording any number of its law enforcement assets can only do so on a temporary basis.

In my state, Florida sent a large contingent of state troopers as well as agents from the Florida Department of Law Enforcement (FDLE) to the Texas/Mexico border.

Despite constitutionalist, pro-police Governor Ron DeSantis throwing his hat in the anti-illegal immigration ring, sending state cops to bolster U.S. Border Patrol and Texas Department of Public Safety warriors dealing with overwhelming odds, taxpaying Florida residents had mixed feelings about the Sunshine State’s decision to be among a coalition of state police operators pitching in at the southern border debacle.

While most I came across implored the governor’s decision to partake —correctly assessing that any unmitigated illegal immigration can certainly encroach further inland, perhaps in their own backyards—others pointedly asserted their tax expenses ought to remain within respective state borders, not beyond. Although among the former, I understand the relative concerns of the latter and protective measures back home.

With any perspective, whether pro or con, the solid-granite fact remains: the federal government is the primary culprit complicit in allowing the festering border debacle while already demoralized U.S Border Patrol agents remain a skeletal presence nonetheless determined to fulfill their oath.

With other states having to withdraw, federal agents combatting border woes remain pillared by county sheriff entities demarcating the Texas/Mexico line, just like the many local governments chain-linking all southernmost American states abutting Mexico. This attests to and mimics what our nation has endured of late: despite being wrongly condemned and whittled down, law enforcement ranks maintain the line and forge on with the country’s security and sanctity, even after the presidency tried to prohibit drone footage of the border bleed.

There is so many political layers to this sordid southern disaster, and expendable federal law enforcement officers is the atrocity which stands out like an atomic ball. Mr. President continues to disgrace hard-working men and women sworn to uphold the same Constitution he continues to betray.

The camel’s back is being burdened beyond belief. And here is a now-former Biden administration official who spent a career enforcing our nation’s immigration statutes at the border: