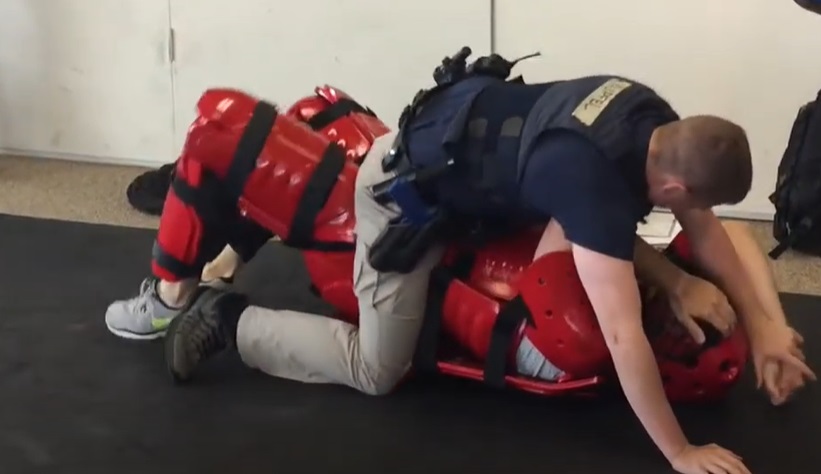 The animal in man is something that appears in his most desperate hours. It is intense, visceral, and primitive. What happens in the mind and body when death is in the air is hard to research, since the body’s functions are rarely measured during those moments. Capturing the full reality of a fatal encounter cannot accurately be accomplished in simulation.

There is a myriad of law enforcement training products available to respond to the constant call for more training for police officers. This almost always means more lectures, more PowerPoints, more videos, more simulations, more scenario training, more role-playing, and ultimately less time for these officers to be out on the street protecting the citizens. It would be a tragic waste of resources for ineffective or unnecessary classes and hardware to be required. The current political posturing and mandates give little regard to such matters, resulting in the potential to burn through grant funding, keep cops off the street, and diminish public safety.

This writer has been a trainer, practitioner, researcher, and consultant. There’s no antagonism against more training and technology. With any topic, whether police training or new brain surgery techniques, an honest evaluation of its effectiveness and limitations is necessary. Periodic reviews of those traits are also essential. Is this really working? Has it failed? Are the results better now than before the change? If there has been an improvement, was it significant enough to justify the expense and time to obtain and utilize it?

Is there a need? The rush to de-escalation training will probably produce some good results, but did we establish a goal to meet? If there is an expectation that persons armed with deadly weapons can always be talked down, or that a drug-induced psychosis can be cured with empathy, then the critics will be disappointed. We have far too little data on the current effectiveness of officers accomplishing their mission with a minimum of force. We do know that only a small percentage of contacts results in the need for physical coercion, and a very small number of those are ultimately determined to be unjustified. In other words, we don’t know what a great job law enforcement is doing, but because of selected viral videos, the entire culture of law enforcement has come under attack with the assumption that the current conduct of most police officers is defective.

Is it research-based? As a former subject matter expert on curriculum for the Colorado Peace Officer Standards and Training (POST) board, there was constant pressure to add this or that. The animal advocates wanted training on dealing with aggressive dogs. The domestic violence folks wanted training on cycles of violence. Now everyone wants de-escalation training. Those are fine topics, but do we have evidence that the way the courses are presented, and the material used produce effective behavior changes? Do we chart current results and compare them to results after the training? Is the research, if any, on which the material is based objective and data-rich, or based on the opinions of activists and influencers?

Is it periodically evaluated? If so, what standards are to be met, and what goals were established to be met? Are we going to keep training this way forever?

Is it political or practical? The reality is that many police executives have to conduct a dog and pony show in order to make a press release that placates the critics. (Like that would ever happen!). Training in the essentials of the job that have the highest risk to public safety is often cut back or criticized in favor of indoctrination. Since most complaints deal with the use of lethal weapon options and use of force at all levels, perhaps more training in firearms and defensive tactics would be most fruitful. But a press release that says police officers are spending more time on the range doesn’t have the soft appeal of saying that they all have had sensitivity training.

Does it work in the real world? Here is the real heart of this article: you cannot train to a point of fully understanding that primitive, visceral, violent, intensity of a deadly encounter. Role-playing and interactive video training can be helpful to raise awareness of tactical options, but there is no way to replicate the expression on a killer’s face when they have decided to take a life. The best actors can’t do it. Stress training on the firing range or in scenario training cannot reproduce the chaotic environment of a street fight.

As a consultant on a shooting case in a large southwestern city, I saw the derision directed at an officer whose report indicated that his assailant had a murderous look in their eye. This was an excellent observation and a very well-known reality in studies in the animal world. Even some faint smells can be detected in a fatal encounter that most officers wouldn’t be consciously aware of or enter in a report detailing the reasons for their decisions.

An officer can train to achieve muscle memory in responding to threats and using their tools, including their body, during a deadly encounter, but they won’t know what it’s really like until it happens in the real world. We need to recognize this reality in our courts, including the court of public opinion.