Skip to content
Violence against police, recruitment and retention on Newsmax with National Police Association spokesperson 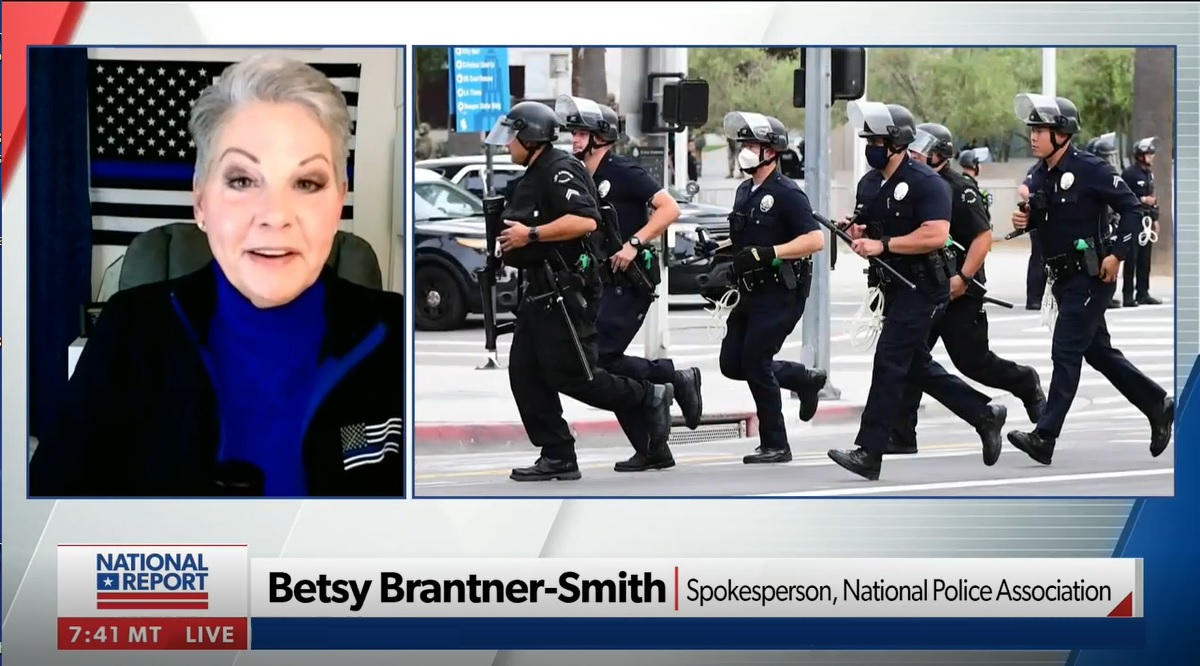 Emma Rechenberg: Violence against police officers continues. The National Fraternal Order of Police says through March, 101 officers have been shot. That’s a 43% increase from last year, 17 killed by gunfire, fire, 32 officers shot in separate ambush style attacks since then. A Philadelphia officer is recovering this morning after being shot overnight. And in Minneapolis, another cop recovering from serious injuries after being shot in the face in the last week, an officer shot dead in Pennsylvania, two others wounded. Tomorrow, a funeral will be held in Ohio for an officer who was struck by a suspect’s car during a chase. Let’s bring in now spokesperson for the National Police Association, retired Sergeant Betsy Brantner Smith. It’s nice to see you, Betsy. Thanks for coming on today. But as I read through those headlines, this must be a very troubling trend for you to see.

Sgt. Betsy Brantner Smith (Ret.): It absolutely is. 17 police officers have died since the beginning of the year, killed in the line of duty, and not just by gunfire. Our Ohio officer that we’re bearing was killed trying to stop a violent pursuit. We have officers assaulted, stabbed, and run over by cars. We had two officers in Pennsylvania killed by a drunk driver. It just goes on and on and on. And it’s incredibly troubling because still, these situations are not getting the attention of the media. And we’re so grateful that Newsmax is bringing attention to this situation because it’s got to

Emma Rechenberg: Yeah, we’re glad to share these stories. It’s important to do so. You say it’s got to stop. I want to ask you first, what do you think is really fueling this violence against police officers?

Sgt. Betsy Brantner Smith (Ret.): There is a false narrative that is being perpetuated by some of the legacy media, by politicians, by activists that somehow police are the problem, that police are a danger to our communities. Just yesterday in Minneapolis with the Amir Lock decision to not charge the police officer that shot him, a police officer that was serving a search warrant trying to find Locke’s cousin, who is a dangerous gun criminal who murdered another man. Now the police again are being told in Minneapolis that they are the problem. And the Mayor is now putting restrictions on what kind of search warrants they can serve instead of standing up and saying it’s a tragedy that a mere Lock was killed, but he pointed a gun at police and the police have the right to defend themselves. Look, violent crime is on the rise. Murder is on the rise. Rate carjackings in New York are up over 100%. The American public needs to decide. Do you want the police to try to stop this crime and are the prosecutors going to help us or do you want to defund the police? Do you want to abolish us? The American public has reached a turning point, and they need to decide.

Emma Rechenberg: Well, they want to feel safe, too, in their own communities. And the slogan of defund the police and quite frankly, even some communities that had decided to do so well that’s now sort of turning around. In fact, President Biden now increasing the budget for police saying the answer is not to defund. In a USA Today op ed here, Democrats finally rejecting defund the police. Now let’s invest in our communities. Is this a sign that maybe things are going to be turning around?

Sgt. Betsy Brantner Smith (Ret.): We are grateful that President Biden is going to do that, but we need to see the details. What kind of situations is that funding going to be used for? Because police officers need training, not your pronoun training. We need officer safety training. We’re being outgunned. We need more weapons, more equipment, better communication systems, more police officers to be hired and retained on the job. So we’re hopeful, but we’re cautious about getting excited about that funding because we need to see how it’s going to be used and is it going to be held over our heads and have all kinds of restrictions put on that? We can have that as well. Here’s the thing about the defund the police narrative. It has failed for the Democrats, but we hope that this isn’t an issue now just because we have an election in November, we want to see sincerity from our politicians and we want them to be loud about their support for the police.

Emma Rechenberg: Let me ask you really quick running short on time about efforts to recruit future officers. CNN is noticing, taking note of perhaps the struggle to recruit and keep officers, saying that departments all point to similar concerns including Covid 19, the great resignation, the climate for law enforcement and local reform efforts that are making recruitment and retention difficult. Betsy got just about 30 seconds for you here. What is maybe the top issue you’re trying to overcome in these police departments when it comes to welcoming new members to the force?

Sgt. Betsy Brantner Smith (Ret.): I’ll be honest with you. It’s incredibly regional. I just got back from training police officers in Texas. They’re not having much problem recruiting police officers. Neither is Florida, neither are we here in Arizona. But the States and the areas that have the very progressive prosecutors and the vilification of law enforcement by leadership are the ones that are having trouble to recruit. But fortunately, there’s a lot of good young people out there that are still interested in being law enforcement. We need to find them, hire them and get them trained to help keep our communities safe.