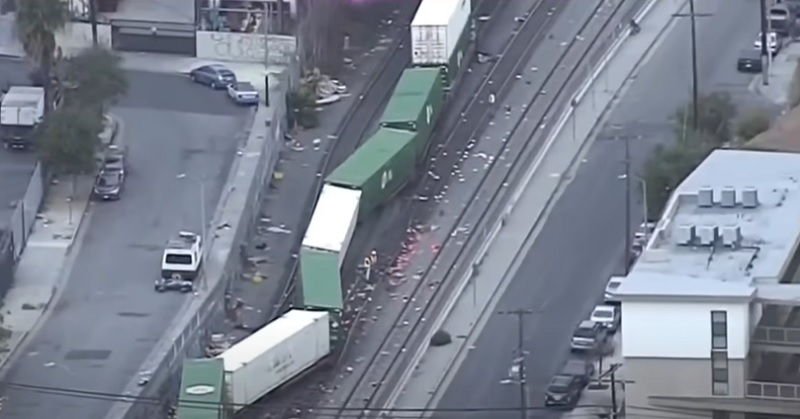 Train wreck is such an apt metaphor for what’s happening in Los Angeles County between the Union Pacific Railroad (UPRR) and the morally corrupt DA George Gascón. Criminals are committing massive thefts against the UPRR, only to have Gascón meet them with indifference. But the UPRR and other major transportation corporations’ recent reactions are rare in modern America.

Stephen Owzinski, my colleague at NPA, recently wrote about these thefts and DA’s inaction in an article aptly titled “California Crime Going Off the Rails.” He mentions drug addicts stealing merchandise from the trains transiting through L.A. Yes, the thieves are directly responsible for the crimes. But, as Owzinski points out, Gascón’s complicity is undeniable.

Owzinski wrote, “If all this sounds way too easy for looters raiding the train yards, be mindful of the soft-on-crime district attorneys office (DAO) in Los Angeles, and the port being in their jurisdiction.” He describes the DAs’ actions as aiding and abetting the thieves and “betray[ing] the oath they took.”

He added, “100 arrests by railroad company cops over three months, and not even one cop called to testify in court?”

But the UPRR has announced new consequences to the failures to prosecute thefts. One is the railroad company is contemplating bypassing Los Angeles County altogether. Think about that. Reroute a major freight train system away from a major hub, not because of the thefts but because the DA won’t prosecute the thieves.

The Epoch Times has also taken an interest in these “train burglaries,” reporting on this new aspect, which is adding to America’s supply chain woes. Jackson Elliott writes, “Union Pacific (UP) sent a letter to Los Angeles District Attorney George Gascón stating that train burglaries in his jurisdiction increased by 356 percent from October 2020 to October 2021.”

This is something that should have been a signal to Gascón but, apparently, wasn’t. UPRR not sending their freight through America’s second largest city is epic and will add to consumer costs and the supply chain disruptions.

For the “nation’s largest rail freight company [to] reconsider sending goods through the area,” is yet another disturbing chapter in what non-prosecuting prosecutors are doing to America’s criminal justice system. Not only is the railroad giant seriously considering avoiding L.A. but also, the Times reported, “FedEx and UPS also are trying to divert railroad shipping away from the area….”

UPRR also told Gascón, “We do not take this effort lightly, particularly during the supply chain crisis, as this drastic change to our operations will create significant impacts and strains throughout the local, state, and national supply chain systems.”

The UPRR notes it has responded with “drones, fencing, and high-tech trespasser detection systems and has paid for additional law enforcement to help prevent theft.” These technologies, strategies, and tactics are successful until they slam into the prosecutor’s brick wall. Law enforcement from the city, county, port, and the railroads file cases that Gascón either tosses or plea bargains down to barely a hand-slap.

UPRR says the L.A. DA allows the criminals its and other agencies’ cops arrest “to walk free.” The railroad’s letter cites a massive 356 percent increase in train burglaries from October 2020 to 2021.

The UPRR, FedEx, and UPS aren’t the only ones frustrated with Gascón’s callous dereliction of duty. According to another report at the Times, by Drew Van Voorhis, “Eighteen U.S. Representatives sent a letter to U.S. Attorney General Merrick Garland on Jan. 20 urging him to take action towards the recent train robberies occurring in Downtown Los Angeles.”

The thefts are not being committed only by “homeless” drug addicts. The Reps’ letter notes “concerns that they are being committed by ‘well-organized’ crime rings.” This is likely. Police have reported the same type of organization is involved with California’s recent spate of “smash-and-grab” burglaries and robberies.

Because of Gascón’s reluctance and outright refusal to prosecute these criminals, the Reps have “called on the [U.S.] attorney general to prosecute the thieves to prevent the situation from worsening, arguing the need for the Department of Justice and the Federal Bureau of Investigation to become involved because this ‘epidemic of robberies on all freight transportation’ has been affecting not only California but also interstate and international commerce.”

“We urge you to expeditiously prosecute and hold the perpetrators of these crimes accountable. Bottlenecks at our local ports and the soft-on-crime approaches by the Los Angeles District Attorney have contributed to these types of thefts in our local communities. Your office must use every tool available to end this type of violence and organized crime.” Since Merrick Garland is the AG, don’t hold your breath.

Their unethical approach should be obvious when the nation’s largest railroad feels it must avoid a particular DA’s jurisdiction to operate properly. Again, it’s not because law enforcement isn’t doing their jobs. It’s because Gascón has chipped away at the prosecutor’s link in the chain that supports LA’s criminal justice system. This has caused that link to shatter and the system to come crashing down on the cops and the communities they serve.