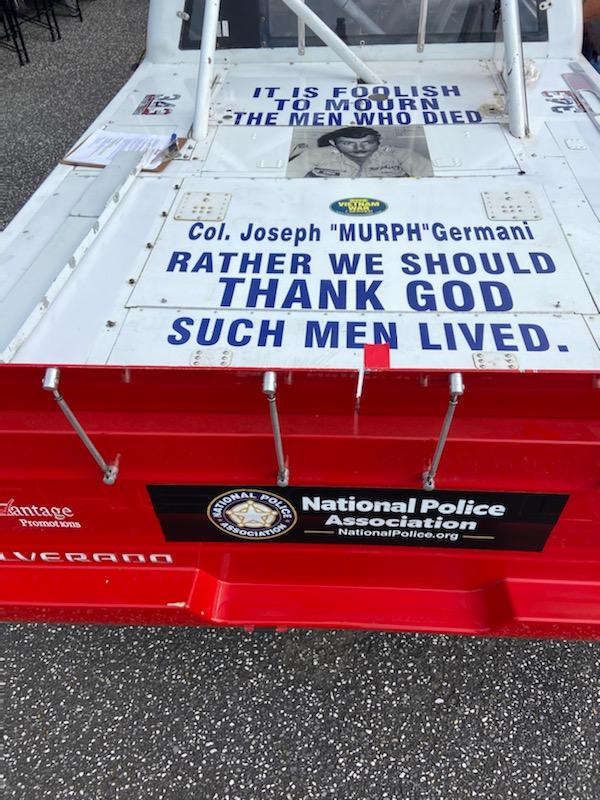 (Indianapolis, IN) The National Police Association announced today it is sponsoring the #28 FDNY Racing Team in the Chevrolet Silverado 250 at Talladega on October 1.

As reported by MetroSportsMag.com on Friday, July 22, 2022 Technical Inspection for the CRC Brakleen 150, the 16th of 23 races in the 2022 NASCAR Camping World Truck Series, was underway at Pennsylvania’s Pocono Raceway. While walking past an open garage, a NASCAR official noticed some words on the #28 Truck and indicated that the decal would have to be removed in order to pass inspection.

The decal was approximately 5 inches tall by 5 inches wide.

It read “Back the Blue.”

The owner of the #28 Truck is Jim Rosenblum, 82, a native New Yorker who caught the racing bug when he saw the first Daytona 500 back in 1959.  Building a successful real estate business, Rosenblum eventually was in a position to indulge his racing dreams in the 1980s. He never had the virtually bottomless pockets of men like Roger Penske or Rick Hendrick, so his teams were never very successful, but he loved just competing and so he soldiered on. ( for more on the history of FDNY Racing, see the following article:

The terrorist attacks on September 11, 2001 inspired Rosenblum to combine his love for America with his love for racing. From that day forward, he would use racing to share messages of hope and patriotism with fans at the tracks and with TV viewers nationwide.

That attitude of the little guy taking his chances against the biggest and the best is part of what built NASCAR. But as costs to compete rose, NASCAR realized that some longtime owners – like Rosenblum – just couldn’t keep up. Bill France Jr., the son of NASCAR founder “Big Bill” France, and some veteran NASCAR leaders wanted to keep these owners involved, so in 1995 they created what was then called the NASCAR SuperTruck Series, a lower level (like AA baseball) where older cars could have steel chassis tubes removed and pickup truck body panels installed. The then-new truck series would race for shorter distances for less money, many times as an undercard for the NASCAR Cup Series.

Rosenblum jumped at the chance offered by the new series. Today, he stands as the only NASCAR Camping World Truck Series team owner who raced at the inaugural series event (the February 5, 1995 Skoal Bandit Copper World Classic SuperTruck race at Phoenix International Raceway) and still competes in the series, albeit only a handful of times a year, mostly with volunteer support from retired first responders or military veterans. But the shiny red, white and blue #28 FDNY Racing Chevrolet  Silverado makes numerous appearances at parades and other civic events that spread the message of support towards those who protect all  Americans. And that has gone on for more than two decades.

The #28 team removed the Back the Blue decal at Pocono as demanded, but NASCAR refused to let them in the race anyway.

Many people sent the story to the National Police Association. We reached out to NASCAR but they didn’t respond. So we reached out to Mr. Rosenblum and added sponsorship to the #28 for the next race he would file entry for, the Chevrolet Silverado 250 at Talladega on October 1, to assist him in bringing his pro-first responder and pro-military message to the public.

We are hoping NASCAR lets him compete.

If you would like to help the little guy, if you want to support the FDNY Racing Team and the way it honors first responders and the military, please visit their website – https://fdnyracing.com – or reach out to FDNYracing@aol.com.