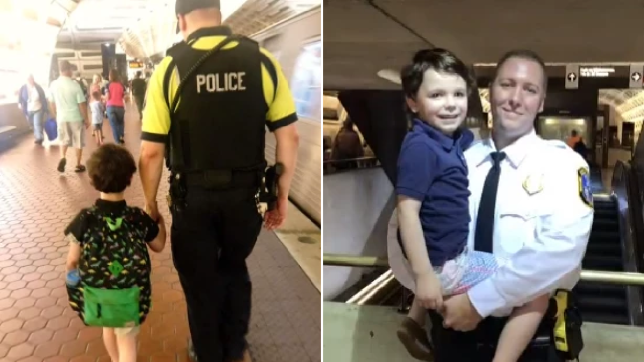 A story from the Gwinnett County Police Department (GCPD), as Breitbart News reported on, we just don’t see enough of, but things like this happen all the time. But that doesn’t make the cops’ kind acts any less special. According to WXIA, back on January 10th, 2020, Sgt. Nick Boney saw a woman walking down the street in chilly weather clutching a bunch of balloons.

Sgt. Boney got out of his patrol car and asked the woman if she needed a ride. She said, “Please,” and hugged the cop. As she’s getting into the car, she tells Sgt. Boney that it is her daughter’s first birthday, and she says she wanted to get her daughter a birthday cake.

Once mom’s in the car, Sgt. Boney steps back and gives Officer Jimmy Wilson his credit card and tells him to go buy a cake and a #1 candle. On the ride to her house, mom chats with Sgt. Boney about her daughter. She asks if he wants to meet her. He says, “Yeah, sure… actually, we have a little surprise for you.”

As they’re getting out of the patrol car at mom’s residence, Officer Wilson arrives with the cake, to which mom says, “Oh, wow! Thank you.”

They go into the house and the image of her other two young children running to give the cops hugs is heartwarming. They’re clearly thrilled to see the officers. Then the two cops meet mom’s beautiful one-year-old girl. They also say hello to mom’s parents who are there to celebrate.

The cops joke and play around with the kids as mom sets up the cake and lights the candle. The officers join in singing happy birthday to little “Kayla,” then they all applaud. They share a bit of birthday cake before Sgt. Boney and Officer Wilson say their goodbyes and are “on to the next call.”

Now, for any cynical anti-cop folks out there, before you argue this was all contrived specifically to cast cops in a positive light, what happened is about as organic as it gets. The sergeant and officer never made a big deal of their kind act. The only reason you’re reading about it and seeing the video now is because a GCPD supervisor was going through random body worn camera videos for an audit. That’s when he saw what Sgt. Boney and Ofc. Wilson had done and brought it to everyone’s attention.

And I’ll tell you what. No matter what anti-police factions want you to believe, I saw many more friendly interactions between police and ordinary folks throughout my career than I ever saw unpleasant exchanges. Most folks are good, and they get along fine with each other. Sorry if that’s news to you because that’s just the way it is in the real world.

And it doesn’t stop there. Last summer, Yahoo Lifestyle reported on another mom thrilled with an officer who went above and beyond for her and her autistic son. This story struck me because my daughter worked for almost 15 years as a nanny for a family with an autistic son. The story also captured my attention because, as a cop, I remember coming across a mother standing on the sidewalk near my precinct, having trouble with her 12-year-old son who was “out of control.” I’d soon learn he was autistic.

His mother was arguing with a man who was berating the boy, calling him “a brat!” I told the man to back off, then worked with the mother to get her son under control. Thankfully, the boy seemed fascinated with, and distracted by, my police equipment. We managed to calm him, get him into the car, and mom was finally on her way. I went back to the man, and though I felt like doing more than just talk, that’s what I did (trained professional, right?).

I explained the boy was not being a brat and that his condition made certain things trigger certain behaviors. It was not the boy’s fault; he was autistic. The man’s reaction made me happy that I hadn’t smacked him (well, the prospect of me losing my career, pension, and maybe going to jail helped, too, but…). He was contrite and said he just didn’t realize how complicated the situation was.

Which brings us to Mahira Dayal’s story, which appeared at Yahoo Lifestyle. Taylor Pomilla was on the Metro in Washington D.C., having just picked up her 4-year-old son, Andrew, from school. Pomilla’s commute home is 45 minutes of pure stress, hoping her son doesn’t suffer a “melt down.” Pomilla told Yahoo Lifestyle, on their way home, Andrew wanted to get out of his seat and play “in the middle of the train” where he could have gotten hurt.

She said Andrew broke down into an “inconsolable meltdown.” She said she could not calm him while he lay on the ground “screaming and going back and forth.” At one point, she said he’d kicked his shoe off and then threw it across the train car.

As with my situation mentioned above, Pomilla expressed a similar parental view. “A lot of people think that he’s a bad child, or I’m a bad parent.” She says he’s a wonderful child and hates that other people view him as misbehaved.

Unable to console Andrew, Pomilla took him off the train where he continued out of control for about 20 additional minutes. While other people likely looked at her as the one with the problem child, “she knew how much her 4-year-old was struggling.”

That’s when Metro Transit Police Officer Dominic Case walked into their lives. He asked if she needed help, though he did not need an answer. She clearly did. He helped them to their next train and he would stay with them all the way to their last stop.

On the way to their final stop, Officer Case distracted Andrew by showing him his police equipment. Then, as Pomilla described in a Facebook post about the incident, the officer asked Andrew, “Can you be a policeman with me and help me do police work on the train?” She says he took his Velcro badge off and gave it to Andrew—to keep.

She said her post on Facebook, lauding Officer Case, was as much to say thank you to him as to inform people what a child having an autistic “meltdown” looks like. She wants people to understand sometimes she could use a hand or at least some understanding when this happens.

Pomilla posted, “That was not his job to go spend almost an hour with a child… You rarely see people help.” Unfortunately, cops do these things a lot, but we rarely see it reported, partly because cops, like Officer Case, don’t publicize these acts. Nice work, Yahoo Lifestyle.

And, finally, there is a recent story I saw on Officer.com as told by CBS8. It happened at Mission Hills High School in San Marcos, California, where a sheriff’s deputy saved the life of a library aide who was suffering a heart attack.

Who says there’s never a cop around when you need one? Not Melanie Curnow, who works in the high school library. Recently arrived at work, Curnow began feeling odd, saying, “I’m in bad shape. Something’s really not right.”

She made it to the health office and told staff, “I think I’m having a heart attack.” She passed out at about the time Deputy Frierson entered the office. She later explained she’d been perfectly healthy, but a random blood clot had blocked blood flow to her heart. But, at that moment, she was lying on the floor, non-responsive, not breathing, and had no pulse.

Deputy Frierson and two others began performing CPR. Then Deputy Frierson grabbed an AED, attached it to Melanie as he’d been trained, and listened for the machine’s instructions. It was during the AED’s second assessment that Deputy Frierson received instructions to push the button that shocked Curnow back into a lifesaving heart rhythm.

Deputy Frierson said, “It was such a sigh of relief. Words just can’t explain it.”

When Curnow regained consciousness, she didn’t want to know what happened. She wanted to know “who worked on me?”  She said, “It was not something people usually survive.”

Curnow wanted to say, “thank you.”

In this time of the Wuhan coronavirus pandemic, Curnow says she’s aware of every single “breath she takes and beat of her heart.” And she’s acutely aware of the lawman who saved her life.

Deputy Frierson said, “I took an oath… to protect and to serve and to… save lives.”

The pair had bonded in such an extraordinary way they say they are now friends for life. And despite California’s current stringent coronavirus protocols, the two could not refrain from sharing an obviously (you’ll pardon the pun, considering the occasion) heartfelt hug.

I saw and was privileged to be a small part of some of these acts during my career. I’ve seen a crusty veteran officer covertly taking a child’s bike to get it fixed because he promised he would if the kid got a good report card.

I knew several cops who routinely visit elderly folks in their homes or at nursing homes, whom they’d become friends with after previous 911 calls.

And, finally, I know two cops whose single act of kindness in 2014, buying and setting up beds for two little girls who had none, has turn into a perennial effort, known as Beds for Kids, that’s been putting beds in children’s homes for years now.

I’ll just go ahead and end it right there because… well, because these stories speak for themselves.