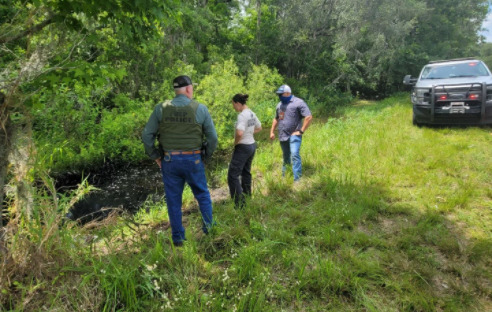 A few years ago, I wrote an article titled “All Kinds of Police.” The piece explored the wide array of law enforcement agencies spanning our nation, from railroad police to postal service cops to law enforcement officials securing our U.S. Mint and national assets.

Among the specialties in law enforcement are environmental and agricultural niches.

These “specialized” cops apply, go through processing like every other aspiring law enforcement officer, and endure either a federal or state-certifying police training academy to garner the requisite skills and know-how to be among professional public safety entities employing and deploying guardians of the Constitution and the land upon which we co-exist.

Largely exclusively, these uniquely oriented police officials concentrate on preserving lands and all life upon it, both human and animal, often joining the police profession as a naturalist with an extraordinary passion for environmental sustainment and ecosystem integrity.

Rather obscure (which is why NPA is emphasizing these uniquely-qualified police heroes for your knowledge base) when compared to metropolis municipal law enforcement activities often boldly out in the open, environmental-based cops often work in mostly desolate terrain, in areas largely uninhabited by humans and abundantly populated by all sorts of wildlife and intriguing creatures.

The paucity of physical presence by humans logically attracts criminals undesirous of an witnesses.

The jurisdictional scope of enviro cops is vast, meaning they may not necessarily have back-up nearby when the dung hits the fan and the element mentioned above goes bonkers out of sheer desperation when confronted.

“Protected lands” is the typical beat of these police officers and requires a rugged rig to traverse accordingly.

Having explained the general composition of an environmental police officer and his/her pursuits, here is a real-time example announced today.

The Hillsborough County Sheriff’s Office has among its almost 4000-sworn contingent both an Agricultural Crimes Unit (ACU) and an Environmental Enforcement Unit (EEU) consisting of deputies possessing honed skills in criminal investigation of agricultural complaints to include livestock theft and illegal dumping.

To effectively navigate the lands upon which they patrol and investigate matters, each ACU and EEU deputy is assigned fully-marked and outfitted pickup trucks, representing the county-level with regard to enforcing public safety features.

Although larger law enforcement agencies are adequately equipped with the training and tools necessary to combat certain unique crimes occurring out in the sticks, they often partner with environmental cops and civilian scientists working for the state.

In the following case, the Florida Department of Environmental Protection’s law enforcement division cops (FDEP Police pictured in our feature photo) worked in tandem with county deputies to assist in the processing, investigation, identification, and apprehension of a suspect who dumped volumes of oil into otherwise pristine waters sustaining foliage, flora and fauna.

An HCSO press release explained the chronology pertaining to how the environmental crime was committed, how it was investigated, the subsequent arrest of a felonious suspect, and what mitigations were employed to help reinvigorate the tainted land:

The sheriff’s office “arrested Omar Hernandez, 33, after he illegally dumped oil which caused thousands of dollars in damages to wetlands in Plant City.” That means tax dollars to maintain it, and additional tax expenditures to clean it all up.

The odor and color of crude oil are rather distinct, and the dip-test technique is a “field test” modality and preliminary piece in the overall collection of evidence in the investigation and toward eventual arrest of suspect(s).

Although I am no chemist, from what I understand via an online commenter, there is a “DNA marker to track oil” elements, potentially aiding the case against the arrested polluter. That’s where forensic scientists come in handy, ala “Forensic Files” sleuthing.

Another citizen’s suggestion was for the county deputies and state environmental cops to bring in federal agents from the U.S. Environmental Protection Agency whose criminal enforcement division cops can charge Hernandez under the Federal Water Pollution Control Act or any of its water integrity legislative acts.

Speaking of water integrity, environmental crime police and scientists on scene were able to photograph a lone snake sluggishly slithering through the now-sludgy ecosystem, compliments of a lazy, malicious illegal dumper:

The sheriff’s office press release continued: “HCSO, in cooperation with the Florida Department of Environmental Protection (DEP), investigated the incident, which occurred over a period of time in April 2021 […] DEP units tested the substance and verified it to be oil. The large dumping measured approximately 80 feet long and 12 feet wide. Due to the spill, fish, vegetation, and wildlife had all been affected in the immediate area.

“Following a thorough investigation, deputies within HCSO’s Environmental Enforcement Unit (EEU) identified and arrested Hernandez. It is estimated that the dumping caused more than $10,000 in damages. Based on the size of the dumping, the DEP requested an emergency clean-up and contracted” an outside company which specializes in mitigating environmental messes.

For his reckless behavior and ill-concern for environmental sanctity, Hernandez was booked into county jail and faces a felony charge of Causing Pollution That Harms Or Injures Human Health Or Welfare.

That’s just one caper having to do with cops overseeing the environmental landscape and the ecosystems sustained. In a population explosion in an area like mine, illegal dumping cases have burgeoned, keeping law enforcement extremely busy with an ever-increasing caseload. See something, say something always applies.

It’s not always about agricultural crime, though. Sometimes it consists of civil matters, like taking a bull by the hor— (ahem), getting it safely back to the owner’s ranch after a corral breach and errant stroll.

Pretty much every state has its own component of a commercial enforcement unit comprising road patrol cops charged with commercial transportation laws. These police units also work major cases of large-scale drug interdiction stemming from an unsecured load or some other traffic law violation leading to a roadside stop and drug-trafficking busts.

In Florida, there is a Department of Agriculture and Consumer Services (DACS) law enforcement division whereby instead of cops patrolling the interstates and thruways looking for truckers’ transportation violations (typically done by the Florida Highway Patrol’s Office of Commercial Vehicle Enforcement troopers), these agri-cops staff the numerous weigh stations/interdiction sites at state line borders and have the truckers funneled into procession for inspections and tonnage assessments.

Incidentally, post-9/11 era sinister actors upped the ante on bomb-making materials being transported via trucks, so these agricultural cops have that challenge (Domestic Security Task Force mentioned in their mission statement).

And, yes, these agri-cops employ hyper-sniffing police canines, especially given the volume of commercial trucks passing through their screening stations on a 24/7/365 basis with the overall potential to smuggle contraband of all sorts.

I’m sure cartels detest these specialized cops snooping through otherwise organic products in efforts to unearth their synthetic poisons destined for street markets throughout the states.

As you can see, there are niche services provided by law enforcement entities across America, with specialized cops overseeing ecosystems, safeguarding conduits, protecting citizens, ensuring organic nature is not bastardized, and arresting bad actors who traipse upon God’s good earth with ugly, slick intentions.