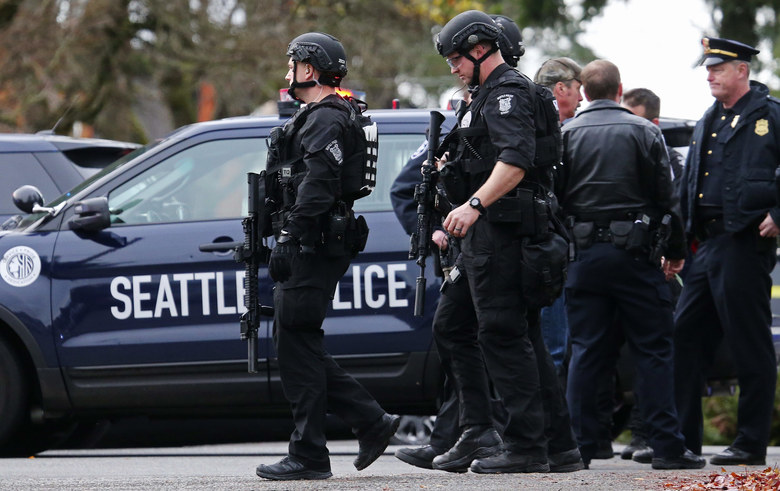 There was a recent and very troubling incident in Seattle. A police officer responded to a report of a suspicious male, according to mynorthwest.com, “terrorizing” an elementary school campus. The story wasn’t only about the suspect’s behavior, but also highlighted the school staff’s reckless response.

The officer reported the principal and some teachers at Sand Point Elementary School refused to speak with him and would not provide important information about the suspect’s alleged crimes against the students.

KTTH Radio host Jason Rantz reported, at MyNorthwest.com, “A man suspected of being high on meth allegedly jumped over the fence at a Seattle elementary school, entered a portable classroom, and attempted to steal students’ backpacks. It prompted a school lockdown. But when police arrived, the school principal would not cooperate. It likely played a role in the suspect then attempting to hijack a delivery van moments later.”

The officer’s report stated that at about 2:30 p.m., the 20-year-old suspect, Liban Harasam, jumped a fence onto school property. Parents later reported the suspect was “harassing students and staff.” They said, while “wielding a tennis racket,” he touched kids’ heads and rummaged through their backpacks.

The principal apparently put the school in lockdown and called the police. However, when an officer arrived, Principal Richard Baileykaze “would not cooperate with police….” Reportedly, he did not advise the officers of the lockdown and would not provide any details of the suspect’s alleged crimes.

The officer wrote that he “met Principal R. [Baileycaze] in the north parking lot. He was observing the suspect with two other teachers. He provided very little information about the incident. I was only advised that the suspect jumped the fence.”

The officer reported he saw the suspect “walking around in circles,” dropping items, possibly “high or experiencing a mental health crisis [or both].”

After Harasam left the area, only then did Principal Baileycaze tell the officer that the suspect had assaulted two children, rifled through students’ backpacks, and stolen a child’s backpack. If the officer had this information earlier, it would have provided probable cause to arrest him for assault and theft. Since he didn’t, the suspect continued his mini reign of terror.

The suspect then allegedly attempted to carjack a DHL delivery van, inflicting a minor injury to the driver. The suspect fled, and police soon located him on a Metro bus. On the bus the suspect reportedly assaulted an officer. The reporting officer said “a source” later told him that officer had suffered a fractured arm or wrist.

Police said it took four officers to subdue Harasam and that they recovered several stolen items from him, “which were returned to their owner.”

Nothing after the first officer arrived at the school had to happen, if the school’s principal had been cooperative. Neither the DHL driver nor the police officer would have suffered injuries.

How “deeply troubling it is to see a principal not cooperate with police when his students and school have been victimized,” Rantz wrote.

He added that officers told him, on the condition of anonymity, “it is common for Seattle Public School staff to stonewall officers after an initial 911 call is made.”

Rantz said he isn’t sure if the Seattle Public Schools (SPS) has a policy that discourages or prevents staff from cooperating with police or if it was simply “due to anti-police sentiment by SPS staff.”

I’ve had similar experiences on the Seattle P.D., but that was long before the current radical left anti-police movement. But Seattle government has always been ahead of the curve on treating cops poorly, despite having one of the best police departments in the nation.

In the late 90s, I was assigned to the East Precinct Community Police Team (CPT). My partner and I got called to a crime, I believe it was a strong-arm (unarmed) robbery, near Garfield High School. We were nearby and responded to assist patrol officers.

Dispatchers broadcasted the suspect was a student and may have entered the high school. On our arrival at the school, some staff were passively uncooperative, while other teachers were openly hostile.

They not only wouldn’t assist us in locating the suspect but also, we later learned, some teachers helped him hide and allowed him to escape.

And unlike the previous criminal-coddling city attorney, Pete Holmes, with Seattle’s new law-and-order City Attorney Ann Davison, a Republican, Hasaram will likely be prosecuted, at least, for misdemeanors.

Reportedly, Hasaram refused to be present for his arraignment. The court set bail at $10,000 and scheduled a competency hearing for June 6th.

On June 6th, KOMO learned from a school custodian, the suspect had “grabbed two children.” Other witnesses confirmed Hasaram had gone inside a classroom occupied by children.

Witnesses also described, “He grabbed one, and thought that’s the one girl he wanted to take (attempted kidnapping?), but then another girl tried to defend her friend and he deflected her, grabbed her too.”

Think about that. In the shadow of the Uvalde school shooting, where gaining access to the building was such a critical issue, this threat simply strolled into an occupied classroom. A classroom in a school with a principal and staff that refused to cooperate with the police.

That cannot happen! The parents of students at that school should be furious with the principal and staff who failed to cooperate with police.

Some may wonder why Hasaram hasn’t been charged with a felony, considering two of his assault victims were children and one was a police officer. Casey McNerthney, of the King County Prosecuting Attorney’s Office, the office responsible for handling felony cases in King County, which includes Seattle, said the city has not referred the case to them for felony charges.

McNerthney said, “I think when parents understandably say, ‘isn’t this a felony crime?’ It hasn’t been referred to us yet because of what they [police] were able to get and not get [from uncooperative school staff] and that’s certainly not the fault of police.”

McNerthney continued. “In talking with the City Attorney’s Office and SPD about this on Friday, the KCPAO learned that the principal was unwilling to assist and the only information they had was that the defendant entered the building.”

More signs of some people in Seattle/King County government’s reflexively leftist bent could be seen in other “incidentals.” For example, City Attorney Davison said her office “initially requested bail be set at $25,000… the judge reduced… [it] to $10,000 at charging.”

Why would a judge do that?

Also, assaulting a police officer is supposed to be a felony. However, it has become routine that assaults on Seattle police officers are only tried as felonies if the assault rises to a felony even if the victim were not a police officer.

There was no word on a decision regarding the suspect’s mental competency.