If you normally only watch the mainstream media’s so-called news reporting, and you somehow stumbled onto this article, it may shock you to learn just how far civil society has fallen in places like Portland and Seattle.

However, in this brave new world, a police chief telling the people of a city that the police will not respond if they are set upon by rioters, that they are on their own, is the lawless inferno city residents are now reaping, a result of their most recent votes.

A police chief of a major American city just sent a letter to Seattle’s business owners and residents informing them Seattle police officers won’t be able to respond to protect them. In the letter, Chief Carmen Best laments the city council, having banned every effective tool (tear gas, pepper spray, etc.) the police have for crowd control when protests become riots. Chief Best wrote, “the legislation gives officers NO ability to safely intercede to preserve property in the midst of a large, violent crowd.”

Taking away the officers’ less-lethal options for riot control leaves cops with few options. Either they use their bare hands and nightsticks, or they open fire with their firearms. Of course, the latter won’t happen, and the former looks awful to those watching the TV news. But then, at least, you’d finally see the mainstream media broadcasting the violence because now they could blame the cops.

Yet, if an officer is on regular patrol, standing on a sidewalk and someone comes running at him or her about to throw a brick, a Molotov cocktail, or armed with a slingshot with a ball bearing, that officer can, and likely would, use lethal force.

Now, I’m not advocating for shooting into a crowd. I’m just emphasizing the massive disadvantages the police are already at never mind after city leaders take away their less-lethal crowd control tools to combat violent mobs. 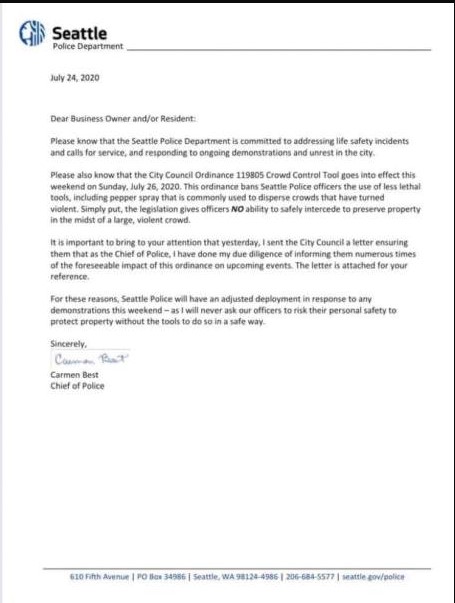 Please know that the Seattle Police Department is committed to addressing life safety incidents and calls for service, and responding to ongoing demonstrations and unrest in the city.

Please also know that the City Council Ordinance 119805 Crowd Control Tool goes into effect this weekend on Sunday, July 26, 2020. This ordinance bans Seattle Police officers the use of less lethal tools, including pepper spray that is commonly used to disperse crowds that have turned violent. Simply put, the legislation gives officers NO ability to safely intercede to preserve property in the midst of a large, violent crowd.

It is important to bring to your attention that yesterday, I sent the City Council a letter ensuring them that as the Chief of Police, I have done my due diligence of informing them numerous times of the foreseeable impact of this ordinance on upcoming events. The letter is attached for your reference.

For these reasons, Seattle Police will have an adjusted deployment in response to any demonstrations this weekend – as I will never ask our officers to risk their personal safety to protect property without the tools to do so in a safe way.

Let that sink in a moment. This is a police chief of a major American city, with a stellar group of well-trained police officers at her command. Yet, the mayor and city council’s irresponsible actions have compelled Chief Best to warn Seattle’s business owners and residents that she cannot in good conscience send officers in to attempt to confront armed, organized, violent attackers, without proper crowd control tools.

It’s not that Chief Best doesn’t want to protect Seattleites; she desperately does. You can hear it in her voice when she speaks. It’s that she can’t protect the public because the disgraced Mayor Jenny Durkan and the radical, anti-police city council will not allow it.

All the while, mainstream media continue to portray the violence in Seattle as either President Trump’s fault “for inflaming the situation by sending federal agents.” Strange, the riots and autonomous zones have been happening since long before the feds arrived. Or they portray the violence as non-violence. We have a major political party in America who has chosen sides, not with law and order but with lawlessness and disorder—anarchy.

And if the city will not allow their police to protect federal buildings, as they are supposed to do, what else can the federal government do? They are mandated by federal statutes to protect federal property. Unlike Mayor Durkan and Mayor Wheeler, they just can’t ignore the law. If local law enforcement won’t do it, the feds have to.

The mainstream media and some radical political officials would have you believe these are all “peaceful protests,” or they don’t report on them at all. Add to that political leaders like Rep. Jerry Nadler who writes off a domestic terrorist group as being “a myth.”

Hey, Rep. Nadler, according to KING 5 News, last Saturday 59 Seattle police officers were injured during one of your mostly peaceful protests by violent lawbreakers belonging to your “myth.” In fact, I know of one young officer who was injured by one of Rep. Nadler’s myths. She reported she will need surgery for an injury to repair the damage. Or is her injury a myth, too.