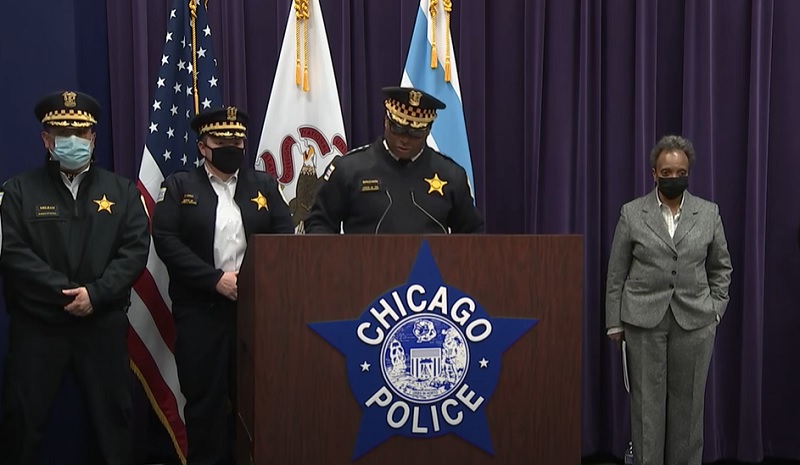 When we think about a “secret police,” we likely think of the former East Germany, the Soviet Union, the current North Korea, Cuba, or the many countries around the world run by tyrants.

However, Chicago Mayor Lori Lightfoot is showing us another more mundane, though still sinister, definition of secret police. In her case, it’s a special Chicago Police Department (CPD) unit she’s kept secret. An additional unit created for her protection.

It seems the cadre of 20 capable Chicago police officers dedicated to her 24/7 protection wasn’t enough for Her Grace. According to the Daily Mail, it was recently discovered that Lightfoot also maintains a supplemental security staff of 70 officers known as Unit 544.

The Chicago Sun-Times cited city records when it revealed Unit 544 comprised “65 officers, five sergeants and a lieutenant are provide [sic] round-the-clock protection for the city’s mayor…” aside from the 20 cops mentioned above.

Lightfoot defended her plump (not the individual cops—probably) protection detail, citing a serious in-person stalking incident that occurred in February. But the unit was formed two years ago. In the stalking, police made an arrest, but, unlike suspects charged with crimes against “ordinary people,” “he’s being held without bail.”

It’s real for every crime victim, Madame Mayor. These are good Chicago citizens who can’t afford a protection detail and are honest people for whom your party works to prevent from using effective self-defense.

Using crime in Chicago as a defense for Lightfoot’s swollen protection detail is a stunning act of self-unawareness. The Sun-Times reported that the CPD “quietly created a special unit to protect Mayor Lori Lightfoot’s home and City Hall and oversee her personal bodyguard detail.” “Quietly?” I wonder why?

I doubt the cops came up with the idea on their own.

But Her Grace’s feudal nature shines through the veil when you learn, even with a staffing crisis, her bloated detail required plucking officers from their neighborhood beats to “keep protesters from gathering outside Lightfoot’s house in Logan Square.”

“Protesters” that her soft-on-crime policies have attracted to the city to wreak havoc.

Lightfoot has done her best to keep the secret unit, well… secret, defending it by citing a muddled stew of various chains of command for City Hall security units. She said she wanted a “unified” command for the security details that protect City Hall, the mayor’s staff, and Her Grace at various locations. Sounds like it makes sense, which is the point. But the reasonable-sounding argument is made to obscure the controversy.

It’s ironic that the Sun-Times points to intelligence warning American mayors about attacks on mayors’ homes in Portland, OR and San Jose, CA “and of death threats to other mayors.” It’s ironic because all these leftist mayors, in such need of police protection, like Lightfoot, intentionally created a welcoming, virtually lawless environment for the violent leftist radicals.

Or does the left still want people to believe the threat comes from right-wing MAGA-hat-wearing Trump supporters? You know, like the kind that strung up, as former NYPD cop Dan Bongino often calls him, “Juicy Smooyay,” (French pronunciation of Jussie Smollett) on a frigid Chicago middle-of-the-night.

This is not a question of whether a mayor or any official should have government protection. Of course, they should. Just like a police officer, an attack on a public official doing, or because of, his or her job, is an attack on the community at large—on society.

But that official should not, while demanding/accepting/enjoying armed police protection, work to undermine those armed protectors by supporting defund-the-police schemes or working to weaken the law-abiding citizens’ ability to protect themselves.

Chicago Fraternal Order of Police President John Catanzara, a vehement critic of Lightfoot (but let’s admit that finding things to criticize her for is a target-rich environment), believes “she’s safeguarding herself at the cost of public safety.” He added, “While murders are soaring, while districts are barebones for manpower, all that matters is protecting her castle.”

Of course, she blamed President Donald Trump for putting her in danger (everyone knows about the massive MAGA gangs roaming the city). She doesn’t blame the divisive radical left, the violent leftist rioters who trashed Chicago, or the violent drug gangs ravaging the city’s neighborhoods.

No, that doesn’t fit the narrative. She said, “he [Trump] pointed really evil and dangerous people right at my doorstep.”

Yes, stick to the script, Your Grace.

I should point out the man who allegedly stalked her reportedly did it because he was angry about parking tickets. I suppose Trump handed those out, too.

Meanwhile, according to city statistics, 2021 saw 660 CPD officers leave the department. That’s nearly double those who left in 2018. She, as with the Defund the Police movement, hopped on the employees must get vaxxed or fired bandwagon. But her protection detail remains fully staffed even as crime-ridden neighborhoods continue to bleed.

After driving so many officers out of the CPD, by fostering a soft-on-crime environment, and firing officers who refuse the mandated injection, she “pleaded with Attorney General Merrick Garland to send Alcohol, Tobacco and Firearms agents to the city for six months after the city saw its murder rate jump to a 25-year high.”

How disconnected from reality can one person be (yes, it’s a rhetorical question, but feel free to answer it just for fun)?

Lightfoot proposed an $80 million cut from the police budget because it fit the defund the police agenda. But now that it doesn’t fit, she is “unveiling a new plan to—ironically— ‘refund the police.’” Of course, that took the horrific murder of CPD Officer Ella French to nudge her in the right direction.

But it seems no matter what she does to “reduce crime,” crime still rises—especially violent crime. “Murders are up a whopping 74 percent since 2019….” That’s because, as she forces more cops out the door, she continues promoting policies that won’t allow cops who remain to do police work effectively.

Just think about that. She won’t allow cops to do their jobs. She coddles criminals. She encourages radical leftist rioters who destroy the city. She drains resources from an already depleted CPD for her personal protection. And then she pretends she’s the most at risk and is still doing a great job for the city. Chicago voters need to wake up—No, not as in becoming “woke” but as in becoming truly awakened.