Skip to content
Reserves Putting in Time on the Job 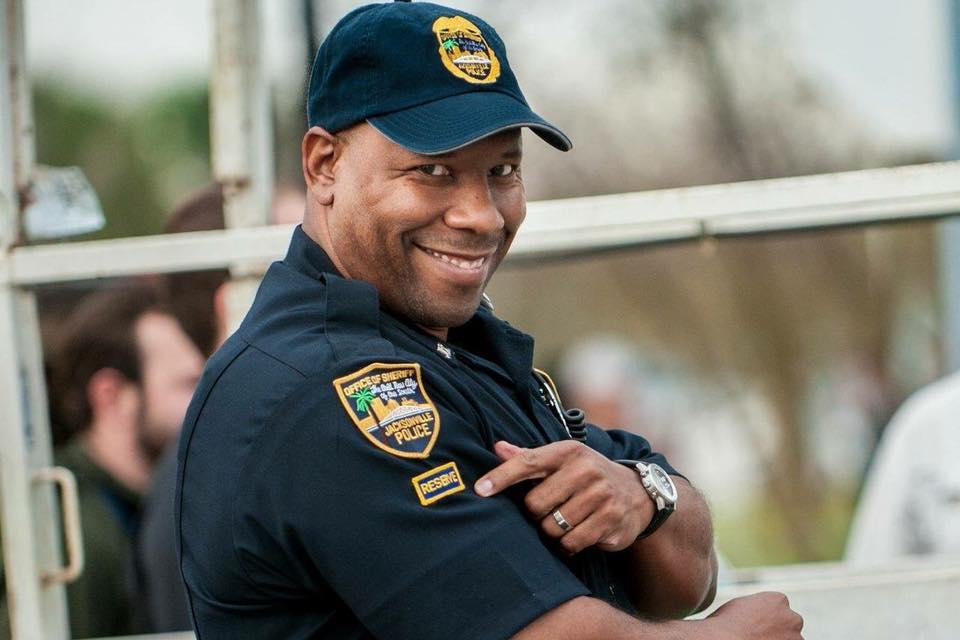 That conveys deserved gratitude to career law enforcement officers who retire but stay on the job (or return after an earned hiatus) as Reserve Police Officers. As well, kudos to people who have never been cops but elect to join the life-saving role in a reserve capacity, all while fulfilling career paths as full-time engineers, accountants, airline pilots, and other occupational roles.

Some may consider volunteer police officer roles as a way to get the proverbial foot in the door, eyeing full-time careers as cops. My police academy had such an individual: a mid-50s gentleman who retired from a 30-year career as a civil engineer, who conducted several ride-alongs with a batch of different police departments. He ultimately became a law enforcement officer with the sheriff’s office.

The DC Metro Police Department published an encapsulation of their police reserves contingency, saying, “The Reserve Corps is made up of over 100 women and men who make a significant contribution to DC policing while maintaining other careers or retirement. Members of the Reserve Corps are dedicated, community-oriented volunteers who receive full law enforcement training and serve on patrol functions.”

So, what is a Reserve Police Officer and what are the requirements to fit the bill?

For instance, the Cosmopolis Police Department posted a bulletin, seeking applicants for their Reserve Police Officer contingency, outlining the requirements for candidacy:

“Reserve Officers are included under the definition ‘specially commissioned Washington peace officer’ under RCW 10.93.020(5). This includes any law enforcement officer who does not serve as a law enforcement officer of this state on a full-time basis, but who when called into active service, is fully commissioned on the same basis as full-time officers to enforce the criminal laws of this state.”

They added, “The academy consists of 249.5 plus hours of state-mandated peace officer certification training and will take approximately 3 months to complete.”

With all that said and done, what are the duty-time expectations of the reserve or auxiliary cops?

Cosmopolis PD didn’t specify the required hours of volunteer police service and only said they expect their reserve officers “to meet monthly and yearly reserve standards.” For context, my department set a “minimum standard” of serving 16 hours per month. The minimum hardly seemed challenging; we found that most reserve officers exceeded far beyond that basic threshold, leaving the ledger wide open for significant numbers. The majority of our police reserve cops were retired LEOs reserving roles as volunteer police officers. That, too, says tons about pure public servants’ hearts.

Generally, once candidates complete the academy, law enforcement agencies supply all the necessary police gear and uniforms but do not compensate reserve or auxiliary cops. No pay may seem extreme to some, but this cadre of cops will tell you it is not about the money, it is about being of service to their respective communities.

I often mention how police officials are a resourceful lot, often finding innovative ways to raise funds to enhance their ranks and better serve you. Sometimes, that you part means like-minded public safety philosophies. Here’s an example…

“The Cosmopolis Police Reserve Association would like to once again recognize Ann Peery for raising funds to support our officers. Funds raised are going towards replacing aging equipment such as ballistic bulletproof vests, new uniforms, and less-lethal Tasers.” 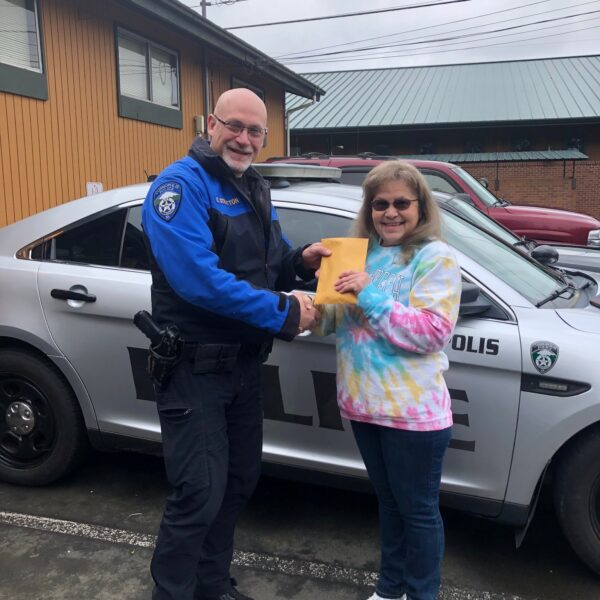 “The reserve officers appreciate the support received by the community. The continued support makes it possible to keep our reserve officers trained and equipped for success.” The Beatles had it right: we can all “get by with a little help from our friends.” Certainly nowadays, with all the antithetical brouhaha over defunding police entities and stupidly waving on criminals.

Looking at California, the Los Angeles Police Reserve Foundation was set up to help support their volunteer cops:

The “Los Angeles Police Reserve Foundation is a 501 (c) (3) non-profit organization, originally formed in 1984 to help recognize the exceptional, often unheralded, service of the members of the Corps. The Foundation funded the Annual Reserve Officer of the Year Banquet, a dinner honoring the outstanding reserve officers of that year, a tradition established in the late 1970s.” Lord knows that city could use the help nowadays, thanks to a certain political party’s defunding mess. 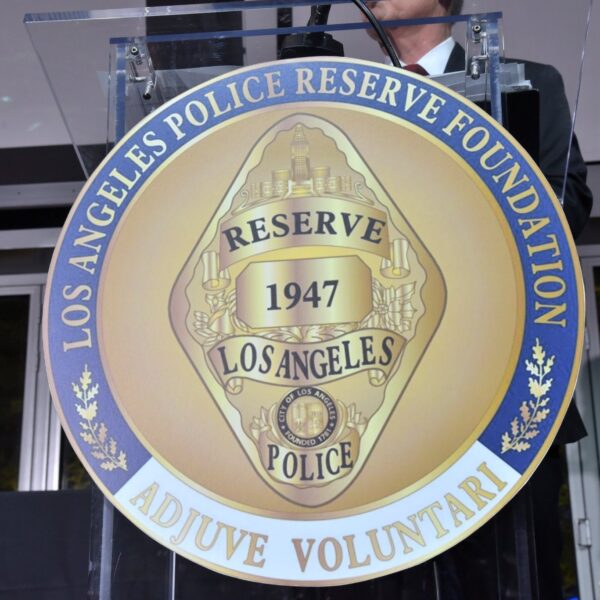 He wrote that in August of 2011, a tad more than a decade ago. With today’s anti-cop pollution, his “extreme volunteers” point has never carried more weight.

As officer safety becomes much more paramount, it is easy to conceive that any full-time police officer would open-arm welcome an equally trained police officer serving in a volunteer capacity. Strength in numbers, right?

Officer safety to a cop is akin to Crayolas to a kindergartener: it’s a must to progress further on.

Among many similar survival-based echoes in police academies across America, officer safety is bandied about quite often—as it should be.

Nowadays, officer safety seems full tilt, especially with the atmosphere insufferably generated by the anti-police bunch. Ambushes. Character assassinations. Malicious ill-conceived prosecutions of cops for doing the job per the requisite training…the same training mandated by the same government that would seek to put them on trial. Utter disrespect toward cops (because that’s what they’ve been indoctrinated to do). The list goes on; you get the point. Lord help us.

Thus, we revisit the strength in numbers credo. In police circles, it is referred to as “back-up” or “additional units.”

Having served in duty boots on midnight-shift for most of my police career, it was always reassuring to have a reserve or auxiliary law enforcement officer roll up on a car I stopped, one packed with too many bodies and not enough seatbelts, a ton of raucous behavior, the odor of cannabis and alcohol, and lippy reception once I addressed the driver.

All cops want to make it home one more time. Officer safety can never get too much attention.

On that note, some police agencies have their reserve/auxiliary staff ride with a primary (full-time paid officer or deputy or trooper) while others permit full autonomy on the road, operating under the direct authority of a watch commander. (Much like a physician’s assistant treating patients under the tutelage

and licensure of a physician, except PAs are compensated whereas reserve/auxiliary cops are not.)

The Florida Highway Patrol (FHP) incorporates “auxiliary state troopers” into its roster of crime fighters and highway safety specialists. Auxiliary troopers are denoted by the distinct tan-colored uniforms worn by all state troopers, except they have dark-brown trousers (with a patch-band stating “Auxiliary” on the shirt sleeves). 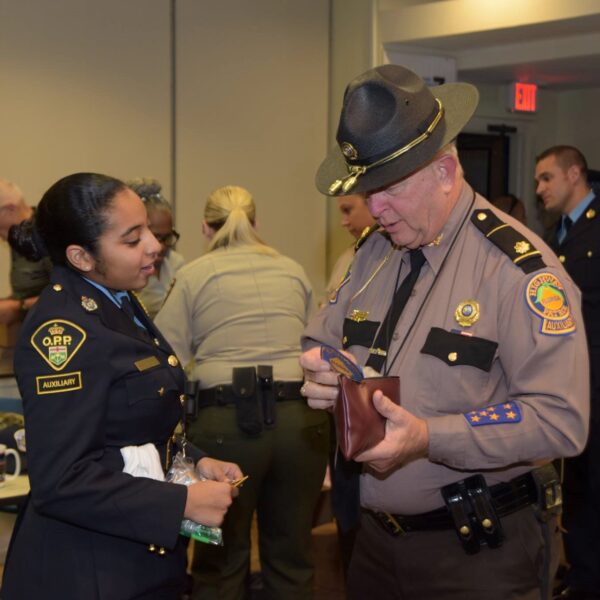 Those words circle back to what we assessed above: that, besides retired cops returning to and reserving time on the job, people from all walks of life, trained in various occupations, bring to the table their unique skills. When combined with volunteer police duties, one can imagine the robust possibilities to be garnered, with the general public being benefactors.

As illustrated in our cover photo atop this article, reserves and auxiliaries typically have their volunteer classification embroidered on their uniform.

Having your attention on that volunteer policeman pictured at the beginning of this material, a poignant story perfectly underscores our topic today, and it involves a member of the Jacksonville Sheriff’s Office who served well…until his line of duty death.

We look at a snapshot of a dedicated volunteer police officer who dutifully served as an auxiliary among the ranks of the Jacksonville Sheriff’s Office (JSO) in northeast Florida. 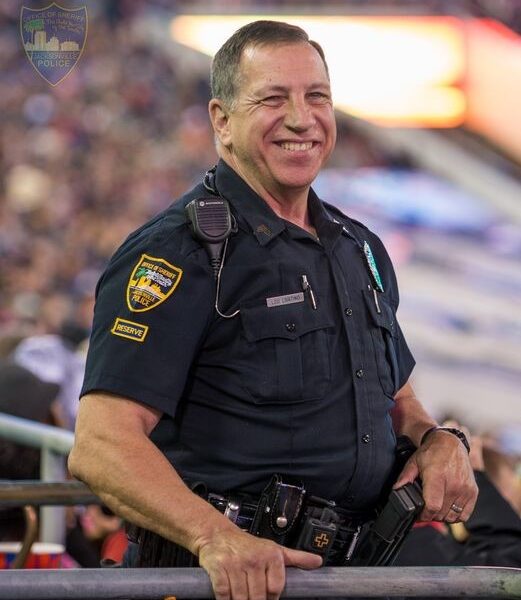 Per a post on the JSO website, posthumously honoring Police Reserve Sergeant Lou Livatino with the 2022 “Police Auxiliary Officer of the Year” award:

“The Police Auxiliary Program is a team of dedicated individuals who volunteer their time to serve our agency and the citizens of Jacksonville. Auxiliary Sergeant Livatino selflessly volunteered countless hours assisting in patrol, working special events in the city, participating in Honor Guard functions and helping JSO’s Investigations teams. In fact, in 2020, he volunteered more than 2,080 hours of his time to serving the community he loved.

“In January 2021, Auxiliary Sergeant Livatino passed away in the line of duty from complications caused by the COVID-19 virus. Earlier this year, his name was added to the local, state, and national Police Memorial Walls.

As mentioned above, reserve or auxiliary cops are trained at the same police academies as their full-time monetarily compensated cohorts. They achieve the same state-required mandates to graduate from the police academy. They don the same agency uniform (often denoted by a shoulder patch that reads “Reserve” or “Auxiliary”) and equipment. They generally perform the same duties as career cops.

They even succumb to duty-related perils, as we learn from JSO’s description of how Sgt. Livatino perished in the line of duty.

Sgt. Livatino reserved time on the job, doing what he loved, for those he loved, knowing the broader scope was one of reliance on badged saviors when things go awry or when the simplicity of listening ears is the elixir.

When considering service to others, it doesn’t get any more selfless than that…