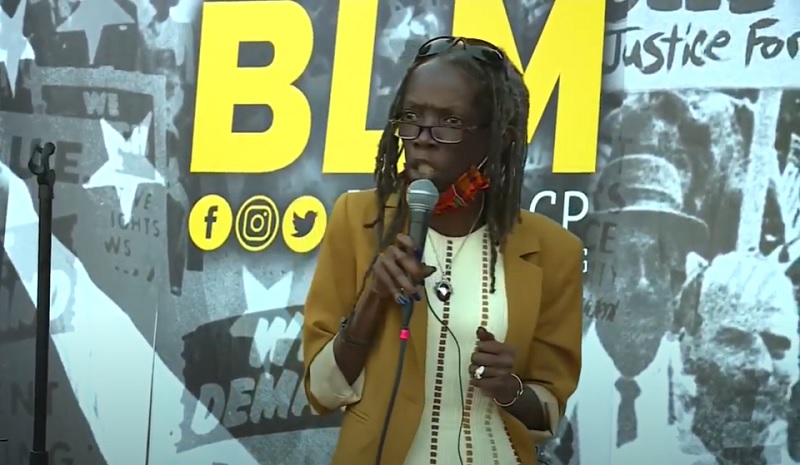 Law Officer recently reported on the election defeat of a politician they correctly referred to as “police antagonist” City Council Commissioner Jo Ann Hardesty. A day after the election, Hardesty conceded to winner Rene Gonzalez and, to her credit, wished him well. You can see a YouTube video of their debate if you’d like to get a feel for the two candidates.

Gonzalez tweeted his thanks to Hardesty for her service to the city (likely with his fingers crossed behind his back) and said, “Time to restore Portland!”

By the way, Gonzalez, the pro-police candidate defeated the anti-police candidate, Hardesty by 55% to 45% of the vote. It may not have been a DeSantis-sized shellacking, but he got halfway there. Seems like the normally nice Portlandians turned nasty after being treated so shabbily for years by politicians like Hardesty (although, they did vote her in, so…).

As Law Officer also reported, which tells some of the tale of this acerbic city leader, “Hardesty held the city council position since 2019. She continuously sought to neuter and ‘defund the police.’ The controversial public figure blamed officers for stoking riots in 2020, and on another occasion went after a city worker for displaying a ‘thin blue line’ sticker on his truck, the Post Millennial reported.”

Regular readers of the NPA understand the thin blue line emblem represents the small number of cops protecting communities against a large number of criminals. It’s also used to honor cops who’ve made the ultimate sacrifice for their communities. There is zero “racist” about it.

In 2020, NPA covered some of the anti-cop barbs Hardesty hurled at officers. For example, I wrote, “So, officer and public safety be damned, ‘the Portland City Council unanimously approved a resolution… to restrict the actions of 56…’ federally deputized police officers. Finally, something was actually being done after months of continual rioting. Yet, the council is still issuing ideological, pap statements such as, ‘We do not want to see dozens, hundreds of Portlanders who are exercising their freedom of expression, freedom of assembly and freedom of speech be arrested and charged with bogus federal crimes.’ This came from the office of Commissioner Jo Ann Hardesty, who ‘crafted’ the new restrictions on deputized Portland cops.”

The “restrictions” Hardesty and her comrades fabricated were for police officers, not rioters. The restrictions prevented officers from assisting federal law enforcement. “Further, Portland police officers ‘shall not take any order, directive or assignment… [from the feds] for purposes of crowd control or demonstration responses….’”

I concluded, “Wheeler, Hardesty, and the other thugs pretending to be city leaders are an embarrassment. But, more importantly, Portland’s politicians are a menace to law enforcement officers who are trying to do a job that is not supposed to be mission impossible.”

So, Hardesty’s defeat also comes with a dollop of schadenfreude, as I, other cops, and apparently Portland voters, celebrate her political demise.

In her concession speech, Hardesty reminded critics of why they voted her out, checking off leftist “keywords” and taking a last swipe at the cops. “Hardesty inferred that Portland is ‘suffering’ due to ‘inequity and exclusion,’ failing to mention any public policy disasters she helped create, like placing traffic barrels in roadways in lieu of cops on the streets to help curb gun violence.”

Gonzalez, on the other hand, according to Oregon Live, is a businessman and political outsider. His campaign focused on the rule of law and restoring Portland to its former glory. A statement at his campaign’s website read:

Our once beautiful city is struggling in ways that were unfathomable a short time ago.

We are at an inflection point in the story of Portland. We cannot sit back idly and watch the city we love struggle without working to help solve its problems.

If you’re like us, you agree that rising crime, declining livability, and City Hall’s ineffective ideologically driven policies are ruining the city we used to proudly call home.

The radical, leftist bubble radical ideologues like Hardesty inhabit sometimes seems impenetrable. But, more often these days, smart voters are replacing anti-police candidates with those who understand the critical nature of law and order.

Speaking of law and order, Hardesty is one of the many police “de-funder” hypocrites we hear about who, after pushing to defund the police, actually called 911. In Hardesty’s case, she called for police to respond because of a dustup she had with a Lyft driver who’d kicked her out of the car (but she seems so sweet).

And, on that note, I think we can begin the celebration.