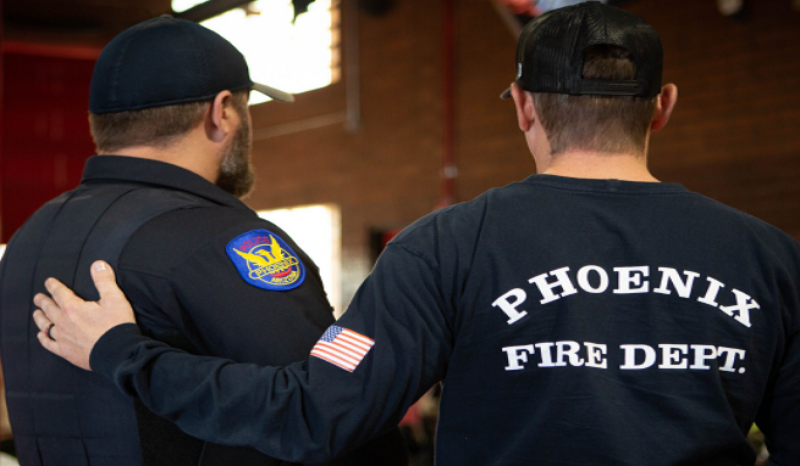 Despite tons of playbooks, public safety resolutions are not always clear-cut. Although police agencies have a laundry list of policies, procedures, and protocols, anomalies do pop up and cops adapt as quickly as possible, always mindful of others and self-preservation.

Critics inexperienced in public safety protocols, and inherent co-reliance to lessen the chances of additional casualties, betray the fragility of life —all lives— when they post knee-jerk replies ignorant of safety factors for all our cops, firefighters, and paramedics working horrific circumstances.

In the following police cruiser dash-cam and body-worn camera footage chronicling the capture of escaped murderer Casey White and corrections officer Vicky White, the love interest who facilitated the saga, some of the comments indicated judgments against first responders mitigating the matter.

Although there were supportive comments for public safety professionals, the usual anti-this and anti-that rhetoric sunk to usual lows. Some spewed venom having nothing to this with this incident whatsoever.

Barbs against law enforcement personnel navigating the unique ordeal, including a smoky auto containing two heavily armed and desperate individuals in a roadside ravine (tough angles and imbalance), were indicative of zero know-how and plenty of misplaced bitterness. The brand whereby utopia is actually believed to exist and that there are unicorns to ride us there.

After reviewing the footage and re-reading the comments, I mused how wonderful it would be for all citizens to experience at least one ride-along with law enforcement. (My department implored ride-alongs.)

Cutting to the chase, police and fire departments quite often work scenes together. Cops investigating traffic crashes and criminal events with injured victims rely on fire/rescue paramedics to attend to citizens requiring medical aid. That’s only done when the coast is clear to do so (cops stabilize the scene).

As in the video above, paramedics are trained to stand by (otherwise known as staging), since the parties involved were publicized as “armed and dangerous” per incessant reports by national news networks. Via radio communications, public safety dispatchers are the vital link back at the jurisdiction’s emergency operations center, conveying imperative details to all parties on-scene, whether on the frontline or staying safe on the periphery.

Universally, when police officers “secure the scene,” meaning it is stabilized by means of disarmed/arrested parties, other public service personnel such as paramedics are given the green light to come in and administer aid.

Bottom line: everyone wants to get home safely!

Public safety professionals working together in uber-trained fashion know well the positive attributes of performing roles when it is safe to do so.

There’s a reason active-shooter incidents are primarily handled by law enforcement officers, before any medical personnel can administer aid to any injured parties. Progressively, even that principle has altered over the years; on that aspect, the National Police Association published a piece exploring the contemporary concept of paramedics dually trained/certified as police personnel, enabling them to address threats and treat injured parties.

Still, bona fide law enforcement officers take the point position, followed by other cops and then paramedics. The goal is to safeguard that medical-aid member for the special skills commodity they possess while also knowing their police certification may be necessitated if all come under heavy fire.

Often enough, fire/rescue personnel request police response to help subdue “combative” people being attended for medical reasons. Sometimes folks are too intoxicated and nasty with paramedics trying to treat them in the ambulance…or even secure them on a gurney (per transport policy/protocol). On duty, I’ve ridden in the rear of city ambulances, to help subdue a volatile party while en route to the hospital (usually meaning custodial responsibility/authority granted by the state’s mental health act stipulations.)

As well, cops investigating traffic crashes involving suspected DUIs, to the extent state statute authorizes a blood draw as soon as practicable, paramedics collect the blood in the rear compartment of the ambulance while LEOs witness and take official possession of the vile of blood pursuant to chain-of-custody protocols (regarded as evidence).

In many of the aforementioned traffic crash/DUI investigations, the suspect supplying the blood is not necessarily cooperative (known as an involuntary blood draw, should they decline the process).

Florida’s statutory language can be found in motor vehicle code 316.1933: “Blood test for impairment or intoxication in cases of death or serious bodily injury; right to use force.”

As there are statutes encompassing assault/battery against law enforcement officers, so too are there such protections for fire/rescue personnel. Florida state statute 784.07 spells it all out.

Early in my career, I employed §784.07 during a situation when a pregnant female fell ill in the parking lot of a Golden Corral. It was a medical call…until it became a police response also.

The pregnant patient’s boyfriend was on scene and creating a ruckus (intoxicated) and reportedly pushed two paramedics out of the way as they were triaging the woman. That angst-ridden maneuver resulted in the fire captain on-scene requesting law enforcement. Good call.

I arrived. The suspect who pushed the pair of paramedics was still boisterous and having difficulty comprehending the well-intended words “Stay back…let them work.”

He stumbled forward and once again made bodily contact with a paramedic operating the portable device assessing the patient’s vitals.

With the help of two other police officers, I buckled the antagonist in the rear seat of the police cruiser.

Given the working relationship cops have with firefighters and paramedics, it is customary to dine together. I still miss the many scrumptious meals cooked up and served by fire/rescue staff at any of the city’s firehouses.

Years ago, the Tampa Police Department (TPD) launched a program called “Firehouse Cops.” The basis was to deploy police officers to where they could also find respite and write reports without having to drive downtown to police HQ. Worked out well. With decentralized fire stations strategically built around the city (based on census demographics), police response times were enhanced. That makes citizens happy.

Knowing each other is just as important as knowing the primary and secondary roles each has in a field operation, ensuring all the pieces fit tightly.

In some examination rooms, police and fire personnel test together and receive federal certifications as bona fides in various topics having to do with massive mitigation efforts. All hands know what the other hands are doing (by expectation).

Relatedly, our county’s fire academy shared training buildings, and nearby acreage served as the emergency vehicle operations center (EVOC). In that context, firefighters got to watch cops train. LEOs got to watch firefighters do what firefighters do. After a rigorous day of training, both public safety entities rubbed elbows and teased each other while devouring wings.

Given the professional co-reliance on duty, sometimes marriages between cops and fire/rescue personnel are born, as are public safety babies. Our jurisdiction had a few.

It is likely you or someone you know may have been backed up in traffic due to a crash, with lanes blocked by huge fire apparatus. Fire engines respond in the event of spills from vehicles and to sweep aside all shards of windshield glass. Fire trucks are ideal for blocking lanes so cops can work the scene, without the fear of getting bashed like a bowling pin. The Move Over Law is only as good as those who honor it.

Circling back to the Alabama escapee aided by the corrections officer, comments attached to the video above contained the following statement, one which underscores our topic today:

“My gosh, no wonder our officers develop post-traumatic stress disorder. I cannot imagine working under those conditions! That can happen weekly for our officers too under different circumstances having to pull people out of cars with horrific injuries & all sorts of traumatic things. I am not made of what our officers are made of. I’m so thankful for them!!”

In the end, never let the negativistic commenters detract from those who point out the insanity cops confront and how they courageously deal with it daily, readily ensuring their brothers/sisters in any public safety uniform are preempted from being scarred by the job’s perilous situations.