Skip to content
Is There a SWAT Medic in the House? 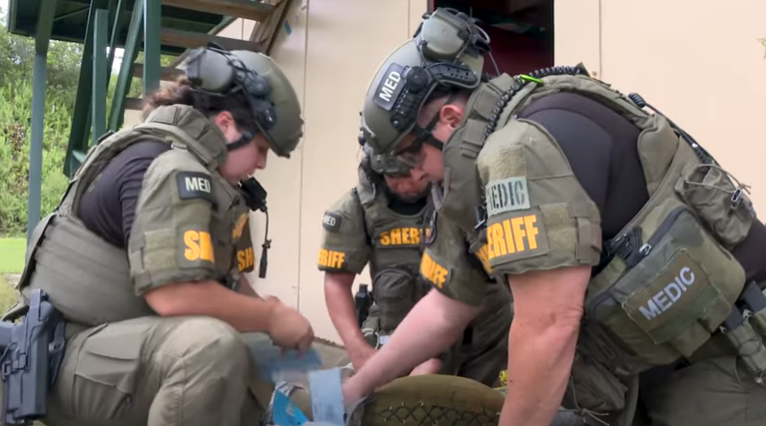 Although cops are not physicians, close equivalents in policing categorized as “SWAT Medics” is one among many manifestations among law enforcement agencies striving to overcome the twists and turns which may evolve in the public safety mission.

By being ultra-prepared to mitigate medical emergencies evolving from high-risk and fluidly volatile situations, police academy-trained personnel also holding clinical certifications equates to a duality equivalent to a combat medic in wartime scenarios, armed for self-defense and defense of others while also equipped for on-the-spot medical triage and subsequent evacuations, adding another dynamic to the Special Weapons And Tactics moniker.

While the barkers busily jeer cops and cheerlead team-anarchy, law enforcement executives are responsible for gauging how their agencies can better serve the public, leaving the so-called progressives to their hairbrained banter and wasted words while public safety professionals blueprint life-saving protocols.

Although the concept is somewhat nascent in traditional policing, SWAT Medics have come into their own, some wearing proverbial many hats, kinda literally.

After all, the name of the game is saving lives. And how that is done can always be improved upon. Who in a situation definably bleak would not welcome a lifeline in the form of a dually certified public safety professional armed with firepower and medical aid kits at scenes where injured victims are pinned or otherwise unable to help themselves elude further mayhem?

Here is a brief glimpse of what we are getting into today:

Although contemporary policing and fire services and EMS factions are still largely separate entities which may sometimes blend on certain calls for service, the trifecta has morphed into hybrid roles to better fulfill the public safety mission in an ever-changing society, one in which bizarre behavior is occurring with greater frequency and depravity.

In the past few years, the anti-cop morass has fixated not only on cops; episodes involving firefighters and paramedics being assailed on scenes made news also. Some EMTs talked of going on duty barriered by ballistic vests.

The Merrill Fire Department lost one of their own after an overdose patient being treated by paramedics and police on scene fired upon them, killing Firefighter/Paramedic Mitch Lundgaard.

This casualty conveys the efficacy of armed/ballistic-protected medics operating in harm’s way alongside rival cops. Sadly, none of this is shocking nowadays.

The concept of armed medical personnel involving saved lives due to on-the-spot care in precarious situations unfolding around the nation is perhaps needing more widespread applications.

Kind of a unicorn on American streets, one adopted by LEOs and derived from military tactics to exhibit varietally skilled assets working in concert, SWAT medics blend policing and medicine into one helluva resource, despite the arduous journey to make the grade. Like many government entities and/or applications, acronyms denote specialties. The SWAT Medic concept generally goes by TCCC—Tactical Combat Casualty Care.

Here is a well-articulated description from Samuel Boyer-Groff, who focused and endured all rigors of achieving dual certifications as a trained paramedic and law enforcement deputy, thereafter undergoing the significantly demanding extra training at SWAT school, ultimately becoming his jurisdiction’s first SWAT Medic:

That young man inspires public service and heroism to the umpteenth degree! Not only did he acquire skillsets resulting in a few badges, he has gone on to roll out Prep Medic coursework and training modules for aspiring SWAT Medics, offering his “experience as a critical care flight paramedic, reserve deputy sheriff, and tactical medic to help first responders and civilians alike implement evidence-based medical care, select gear, and gain insight into EMS and law enforcement.”

Consistent with the paramount of officer safety and vulnerable crime victims, teaming up with operatives deploying suppressive fire while another team member triages and treats downed citizens (or uniformed members) is courageous and commendable, especially given severe threat to their own lives. Attributes of oath are glaringly on display in the context of this strategy. 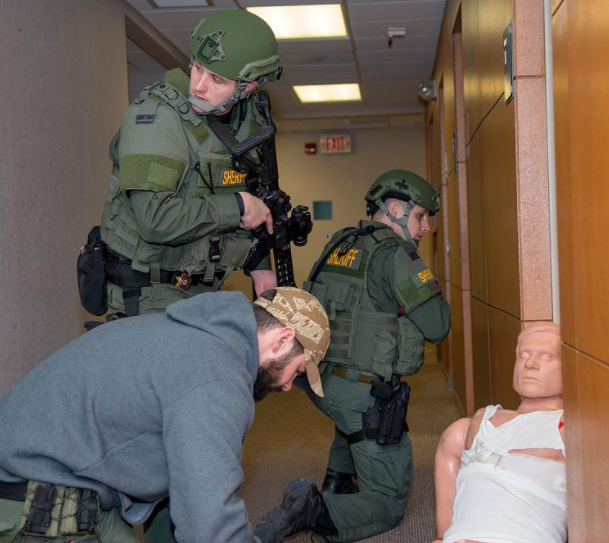 Though the sample size is modest, it draws awareness to the fact that police entities, by general intent, are not confined to the box insisted by some factions, namely anti-police voices, many of which foolishly wish to cleave law enforcement resources. Mission creep by those who prefer a largely police-less society is antithetical to ensuring a society without anarchistic travesties.

Generally, police personnel’s primary responsibility is “scene safety.” That is, having paramedics stage while the volatile scene is secured, assailants are apprehended, after which individuals unfortunately injured during the mayhem [including suspect(s)] are tended to by certified medical personnel employed by the fire department. In metropolises, EMS responders are employed for such a response. In either case, the crucial feature is that cops keep everyone safe until the violent event is deemed safe, after which medically-trained staff are waved in to provide care for the injured. The factor here is lapsed time while a patient bleeds or otherwise worsens in terms of survivability.

That has slowly changed over time; not the protocols to maintain safety for all, but the more-expedient capacity to tend to those needing medical attention. Dually certified cops/paramedics was the antidote when beaten and bloodied bodies lay prone while bad actors sprung malice.

Eventually, the firefighter/paramedics with whom I worked the streets forged a mutual aid-like agreement, interviewing, screening, selecting, and sending some of our city FF/paramedics through the traditional processing/training requirements to graduate as bona fide law enforcement officers.

This was evolving at the last leg of my police career, so I didn’t get to see it in action. But I followed up and learned that a few dual-certified firefighter/paramedics (the general hybrid in Florida) did succeed police academy training, eventually obtaining a state-issued law enforcement officer license.

Speaking of police academies, this subject matter reminds me of a sole police academy cadet who was there for his LE certification, a necessitated stint to fulfill a role as a state-certified fire investigator. So, this one guy already secured his fire sciences academy cert and only needed his police cert to, among other typical principles, grant him the power of arrest. Makes sense, should he investigate suspected arson scenes and close in on suspect(s).

Earlier I mentioned how the SWAT Medic feature is not exactly widespread. For one, not every police agency has the budget —and therefore the personnel— necessary to launch a SWAT contingent.

My very first exposure to the SWAT Medic concept was in the early 1990s, and it raised eyebrows. I’d never seen such a thing prior.

Back then, when I was studying criminal justice at a community college in South Florida, I resided in a small municipality which had the concept of a “public safety department,” meaning its cops and firefighters were one and the same. Each member had to be dually certified by a police academy and a fire sciences training facility.

Much to my surprise, I’d see uniformed cops arrive in police cars, sometimes going right to the trunk, modifying their garb with gear other than the array used as a cop. In one particular fully engulfed apartment fire, public safety officers in cruisers cut through traffic quicker and on-scene before their colleagues arrived in fire engines. Having been raised in NYC, where there is a distinct department for every purpose under the sun, it was a headscratcher for me to see this novel method.

Once, I asked one of the department’s public safety officers about the duality, and how effective it was. As an aspiring cop, I was curious about the concept. He didn’t provide a thumbs up or down, only saying “it is different.” I inquired about how it works: Someone must engineer and staff the fire engines while cohorts occupy public safety cruisers.

He explained that the department operates on a rotational basis: for a stretch of a few months, public safety officers were primarily assigned law enforcement duties while others were helmed at the public safety operations center (fire apparatus and quarters housing PSOs on the backside of HQ).

That was the only exposure I had back then. The rotational basis of PSOs staffing either the fire side or the police side emphasized mutual responsibility, whether one presented for duty with a gun belt or medi-pacs or firefighting apparatus. (As of September 2021, the aforementioned public safety department rolled back and became two distinct departments, one primarily policing, the other handling only fire/ambulance runs operating out of newly-constructed firehouses.)

Piggybacking on the aforementioned public safety department, the Palm Bay, Florida police and fire departments shaped a hybrid, as explained in this brief video:

Given that law enforcement agencies are oft referred to as paramilitary, the epic movie “Hacksaw Ridge” illustrates the police Medic role we are discussing today.

As Warren Cantrell wrote for Scene Stealers, “These are the characters that braved the bullets to be at the front, alongside active combatants to help either with their observations or their life-saving actions.”

Sifting through SWAT Medic materials, I came across commenters, two of whom proclaimed they were physicians prepping to undergo what it takes to become police academy-trained, their destinies to fulfill the SWAT Medic role. The figurative “Is there a doctor in the house?” trope becomes reality; there may a modest constellation in police precincts in various parts of America.

In any event, public safety operators enhance life-saving chances by progressively upping the ante on behalf of the citizenry they serve. As a City of Miami SWAT Medic exclaimed, the concept “takes saving lives to another level.”

The biggest take-away here is that brave individuals undeterred by requisite excessive training make strides toward heroism by entering the fields of fire…and they may very well be components of a police agency near you.

As Dr. Martin Luther King, Jr. said: “Human progress is neither automatic nor inevitable. Every step toward the goal of justice requires sacrifice, suffering, and struggle; the tireless exertions and passionate concern of dedicated individuals.”