Skip to content
Officers Charged in Shooting, While Suspects Who Started Shooting Have Charges Dropped 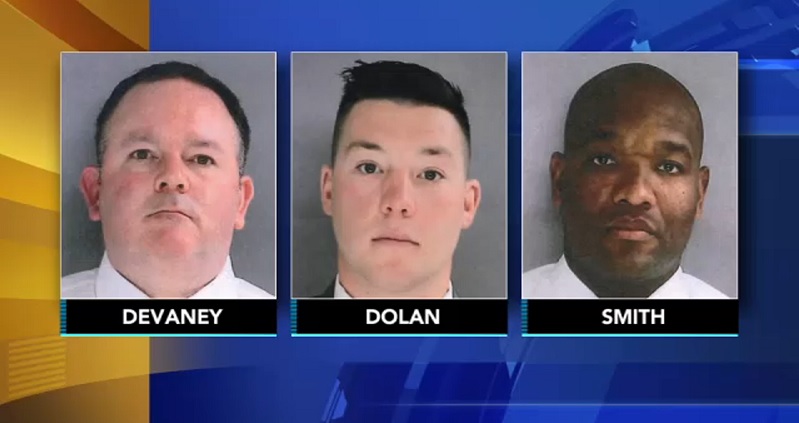 “This is a sad day for our officers, who face criminal charges for trying to do their jobs and keeping the community safe. The FOP continues to support these fine officers and will provide a vigorous defense against these allegations.” This was a portion of an impassioned statement made by Joseph Fitzgerald, president of the Delaware County Fraternal Order of Police Lodge 27.

As reported by the AP and republished at Police1.com, Fitzgerald was responding to a grand jury indictment of three Sharon Hill, Pennsylvania police officers, each for “10 counts of reckless endangerment and one count of manslaughter and involuntary manslaughter…,” for an incident that occurred on August 27th, 2021. Sharon Hill is a suburb about eight miles from Philadelphia.

A high school football game was letting out when two black teenagers,16 and18, got into an argument within the crowd of fans. The argument became violent when the two drew guns and fired shots at each other. Reportedly, some rounds went toward the officers, who returned fire. Sadly, three bystanders were injured, and tragically an eight-year-old girl was killed.

Reportedly, an investigation eventually determined that the rounds that caused the injuries and death came from police gunfire. Because of this the DA dropped the murder charges against the two suspects who’d started the shooting.

This is not necessarily the end of possible charges for the two suspects. Stollsteimer stated, “While I believe these defendants should be held accountable for starting the series of events that ultimately led to Fanta Bility’s death, developments during the grand jury investigation render it appropriate to withdraw these charges at this time.”

To his point, the “transferred intent,” the “intent follows the bullet,” theory, was simply no longer valid, since the rounds that struck the victims had apparently not come from their guns. More appropriately, the “felony murder” rule applies, as the injuries and deaths resulted from the suspects’ felonious discharge of their firearms where intent to harm the victims is not required. This would make second-degree murder the appropriate charge.

In November, the Democrat DA, Jack Stollsteimer, citing “transferred intent,” believed “first-degree murder charges were warranted….” He said, “their [the teen suspects] actions had set off the chain of events leading to Bility’s death.”

This is where a cop’s “spidey senses” begin to tingle. Even if the officers’ bullets caused the injuries and a death, what changed about the original suspected shooters’ actions. They still “set off the chain of events leading to…” that little girl’s death and the other victims’ injuries.” Hopefully, the DA will re-charge the suspects appropriately.

Not having been there, it would be irresponsible for me to come to any conclusions. However, I’d like to see a time return to when cops were given the benefit of the doubt most of them deserve, unless evidence and investigation proves they don’t deserve it. So, I’m giving those officers the benefit of the doubt. We don’t need any more of this knee-jerk, cops are trigger-happy racists who relish taking minority lives BS.

Unless you’re in the situation, it’s difficult to criticize the officers reacting to what is happening within the fog of chaos, as bullets zip by your head. Non-cops often criticize police actions before knowing the full circumstances. They act emotionally because that’s often how the media presents it.

The mainstream media most often reports these controversial incidents less than favorably toward police. Still, for most of us, media reporting is the only thing we can respond to. Cops try to fill in gaps in news stories based on their own training and experiences. Non-cops can’t do this, but they could still give the benefit of the doubt to the sworn, trained professionals.

Keep this in mind as you consider what happened in this incident. For example, police officers know they are responsible for every round they fire. This obviously means knowing their backdrop (area behind suspect) and, normally, avoiding shooting near a crowd. But this doesn’t mean there will never be tragic, unintended consequences, as there were here, when officers must use force under difficult circumstances.

You can add to that how warped the criminal justice system has become in some places. Cop-haters condemned Stollsteimer, for initially charging the two young male shooters who started the shooting with murder. Five Philadelphia City Council members went as far as to call the charges against the shooters a “shocking miscarriage of justice.”

The cop-haters could not care less that these suspects allegedly opened fire within a crowd of innocent people, which initiated the police officers’ lethal response. They are apparently upset that this DA, “elected on a reform agenda…,” was caught doing his job. Apparently, he filed those charges before learning the rounds, causing the injuries and death, reportedly came from the cops’ weapons.

Still, that doesn’t change the fact that those suspects caused everything that followed firing their weapons. That little girl would be alive today and three people wouldn’t have been injured but for their actions.

This reminded me of a similar incident that occurred in my former agency. In 2016, then-Seattle Police Chief Kathleen O’Toole, according to The Seattle Times, “reversed misconduct findings against three officers who heard gunshots and returned fire toward a car they mistakenly believed to be the source of the shots.”

It wasn’t so much the overturning of discipline, which the Times described as “rare,” that struck me. It was the refreshing reasoning Chief O’Toole used to justify her decision. She wrote, “Indeed, based on my experience as a law enforcement officer, I have no reason to believe that I would have acted any differently had I been in that situation; the Department’s Deputy Chief, the Assistant Chief of Patrol Operations, and other Department leaders have likewise stated the same.”

O’Toole was speaking from an abundance of diverse law enforcement experience acquired during a distinguished career. O’Toole began as a Boston cop, earned a law degree, was a Lt. Colonel in the Massachusetts State Police, became the first female Boston police commissioner, and served a “six-year term as Chief Inspector of the Garda Siochana Inspectorate…,” the Republic of Ireland’s national police.

The point here is Chief O’Toole considered what those officers were experiencing while making their use-of-force decisions, using her experience as a police officer. More leaders should do this.

But it doesn’t come naturally to too many chiefs, especially those appointed by politically ideological mayors, as O’Toole was. But you may recall the word the Times’ writer used to describe the former chief’s actions: Rare.

Let’s hope, in cases such as the tragic one described above in Pennsylvania, as happened in Washington State, that law enforcement leaders applying cop-commonsense to judge their officers’ intensely difficult decisions, instead of rare, becomes the standard.