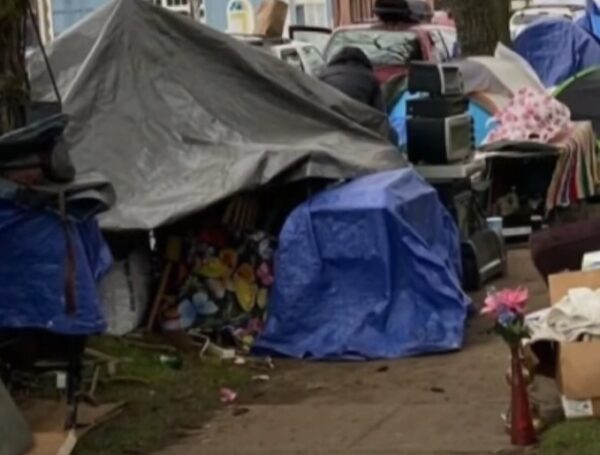 We all know that the “homeless crisis” infecting so many American cities affects police officers profoundly. First, the nuances of the political manipulation, compounding for decades, must be understood to fully understand the surrounding issues.

This was an effective political tactic because “homeless” conferred automatic virtue onto and sympathy for people, most of whom, choose to live on the streets and often behave in less than virtuous or sympathetic ways.

During my career, I never knew of a “homeless” camp in a neighborhood that didn’t experience increased criminal activity—never. These blue city politicians and activists never seem at a loss to create ways to make their self-inflicted crises worse.

There is more than enough evidence that rampant “homelessness” isn’t good for a city’s law abiding, normal residents or for the “homeless” themselves. Normalizing bad behavior always makes it worse—for everyone.

That cities like San Francisco, Seattle, and Portland have seen increases in “homelessness” following increases in funding show radical leftists refuse to do what’s necessary to decrease the crisis.

Townhall recently reported, “Why Portland Is About to Become Heaven… If You’re Homeless.”

Incredibly (we wish it truly had no credibility), Portland is planning to legitimize homeless encampments, building “Safe Rest Village sites” in 2022. These sites will provide “individual sleeping pods outfitted with electricity, heating, and locking doors. Shared bathrooms, kitchens and laundromats will also be set up in the villages.” They plan for populations of 60 people per “village.”

Remember, Portland is the city that, back in 2019, as reported at Daily Wire, broached requiring private property owners to provide “mandatory rest spaces,” for the “homeless.” They wrote, “The city’s ‘planning and sustainability commission,’ which writes and enforces the city’s building codes, approved a change to building guidelines in November that would require new construction to feature ‘opportunities to rest and be welcome’ for those who do not number among that building’s residents or customers.”

Any cop will tell you there are always some decent people that get caught up in “homeless” encampments, having suffered temporary life setbacks. But cops will also tell you that most “homeless” of any sort, suffer from addiction, and/or mental illness, and many are repeat criminals.

Rather than normalizing anti-social behavior, addiction, and criminal behavior, why doesn’t Portland give normalizing normal a shot? There’s nothing wrong with normal. And, by normal, I mean traditional civil behavior where people are expected observe the Golden Rule.

Normal has little to do with a person’s religious or spiritual beliefs, or lack of belief, or gender, racial or ethnic identity, sexual identity, political perspectives, or etc. Normal has to do with treating others with respect—how we’d like others to treat us. Setting up a tent and living on a sidewalk, urinating, defecating, and strewing trash about disrespects the community. Politicians allowing certain folks to break certain laws also disrespects the community. It’s not normal!

People used to believe it was normal to treat people with respect—even those who disagree with them. And to expect people to treat them with respect in return. And to hold people accountable for their bad behavior. That is normal.

We have a God-given, Constitution-guaranteed right to life, liberty, and the pursuit of happiness. Commensurate with those rights is the responsibility to respect others’ rights to these blessings. That is normal.

Living on the streets, abusing drugs and alcohol, exchanging sex for drugs, avoiding/declining mental health treatment, and not being held accountable for crimes you commit are not normal. However, that is how city politicians treat the “homeless” in places such as Portland. That is not normal.

Portland’s political leadership exploits this and other self-inflicted crises, allows people in crisis to wallow in their despair and marinate in their mental illness and addiction, all so they can retain the issue as fodder for reelection. This is not compassion, and this is not normal.

And who pays the price for this assault on normal? The city’s law-abiding citizens and the defunded cops who are trying to do their jobs with zero support from city leaders and a dangerous lack of resources to do their jobs properly.

The shelter-first/treatment second (or never) doesn’t have a great track record. If it did work, people would still have whatever shelter they lost to become “homeless.”

By not addressing the underlying issues of addiction and mental illness, irresponsible and dysfunctional people will not thrive, but decline, in Portland’s “safe rest village” Utopias.

Like a broken record, cops continue to ask their residents, who keep assuring them a “silent majority” support the cops, why they keep electing anti-police candidates. Candidates that prevent cops from doing their jobs properly.

You remember the word that describes doing the same thing and expecting different results, right?

Well, you also remember that word that describes treating people with respect and true compassion and expecting the same in return, right?