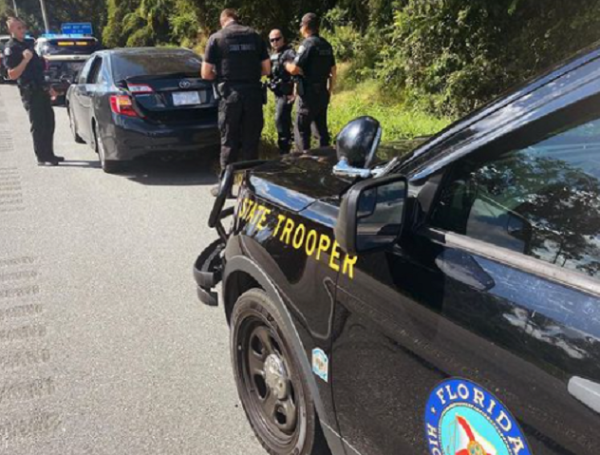 Anyone looking at anti-police media entities intentionally denying the absolute truth about how instrumental cops are in American society is being grossly deprived of myriad major feats, surreal saves, and massive differences made for us all.

Police presence among a hugely diverse Constitution-embracing population is ideal. But not everyone gets to enjoy those promised principles, thanks to illicit-minded members of society who care not for rules and regs, and cringe even more over the cops who are charged with enforcement of said covenants.

We all know what would evolve if we didn’t have police among us; some call it anarchy, others call it lawlessness. Those descriptions or any others like it are purely un-American. Much of 2020 was an exhibition of chronic chaos—an apex of cops combatting crisis after crisis and chomps from anti-police fangs.

The thin blue line forged forward against an undeniably overwhelming push for the whittle and/or abolition of police. Ever wonder about various crime victims whose salvation was delivered by police officials storming in or detecting something amiss and employing keen senses and lawful authority to abate major misdeeds by bogeymen?

Among the Niagara-like flow of sensational police work resulting in travesty averted and humans saved by cops on the job, is a recent saga which played out along a stretch of Florida highway.

A Florida Highway Patrol press release explained: “Following a traffic stop on I-75 near Bushnell, FHP Troopers assigned to Sumter County observed four nervous passengers in a vehicle during the traffic stop. The Troopers, recognized signs of human smuggling, including scarring, and removed the occupants. Following a roadside interview, the driver was subsequently arrested for four counts of human smuggling. The Troopers undoubtedly saved these individuals from a terrible situation.

“We appreciate the Troopers’ dedication to the profession, service of their communities, and continued diligent work in helping to keep the citizens and visitors to the State of Florida safe on our roadways.”

Taking an exponential look at that example of human smuggling, the southern border crisis is rife with reports using the words “human smuggling,” exacerbated by the current White House administration pulling scores of federal immigration agents from the border who were redeployed inland, “to babysit.” Perhaps Joe ought to re-read “The Little Dutch Boy,” who knew that effectively plugging a leak in the dike (wall) to manage integrity against full-on crush of unmitigated flow required a dedicated presence, for as long as it took until total resolve.

Remove law enforcers and all manner of nemeses move right on in!

Historical demonstrations of the law enforcement role in the United States portrays quite a robust body of crimefighters, among them many episodes of “cops and robbers,” the latter scheming to get “the jump” on the former…and the former strategizing for effective arrest without incident. In some ways, we have progressed; a majority of citizens embrace the police mission and those who implement it. In other ways, cops confront far more violence than days of yonder, when wrongdoers (after being “had”) largely just came along out of respect for the person with a justice shield.

Like me, any of you around for a handful of decades can reminisce yesteryears, when cops were heralded for bravery to take such a job.

Conversely, criminals nowadays are passed the torch by bleeding-heart liberal leaders. The battle between good and evil wages…and lessons are to be gleaned.

A recent daddy/daughter venture had me and my young adult daughter driving through the heart of downtown Tampa, traversing on the expansive thoroughfare which immediately abuts Raymond James Stadium where Super Bowl champs Tampa Bay Buccaneers play. The Chicago Bears were in town for a Sunday evening game.

The throngs of Tampa Bay natives donning all-things-Bucs were all over —like ants constructing a colony together— to the tune of tens of thousands. Crossing multiple-lane highways from remote parking fields where team-pride tailgating transpires and beer kegs serve as impromptu footrests, fans aggregate hundreds-fold at a clip and respect the handwave of police officers from various Tampa Bay law enforcement agencies working in tandem to usher crowds safely and ensure everyone has a robust experience at the event.

Other large-scale events are no different, whether it be concerts, political party rallies, monster truck gigs, etc., and all are tagged as post-9/11 soft targets due to the potential for terrorist activity inflicted upon extremely large populations. We all relate to that last factor, thus the more visible police presence the better for all.

Terrorists may also be deterred by the sight of cops. But knowing their blatancy and suicidal tendencies in the name of whatever idolatry they pledge, pre-game policing encompasses bomb sweeps by explosive materials-detecting dogs partnered with heavily outfitted canine cops—a sight to be reckoned with for a nowadays necessity.

Back to the football game fanfare and tsunamis of pedestrian traffic: my daughter exclaims, “Dad, there are so many cops here! Wow!”

I segued into the demographics speech and ratios, detailing how mindbogglingly outnumbered LEOs are with regard to the possibility of a full-house stadium seating 65,618 and how, depending on special events, that robust tally can expand to hold 75,000 with special seating arrangements.

That’s a ton of people being safeguarded by a minority number of cops. Point is…most folks are law-abiding and are understandably comforted by police presence in any number.

Yet there’s always that guy (or two or three or twelve) for whom police personnel swing into action triggered by those who stagger from those kegs we mentioned and into the stupid lane. Having had some scraps in that stadium, many of the brew-influenced sorts foolishly fight the police instead of heeding darn good advice. Throngs of game spectators cheered when rabble rousers were “ejected” or arrested.

Having worked security details at Ray-Jay for Bucs games with other cops years ago, the population pushing in and out of the stadium is a humongous undertaking requiring mostly uniformed hordes of law enforcement officers (undercovers did their thing re: scalpers, counterfeiters, contraband dealers, etc.)

What would happen among steep bleachers without cops requires little imagination to equate the disastrous outcomes. Largely, the anti-police push in varying leaf-leaning locales suppressing police presence/response would burgeon in brawls, ticket-paying innocents be damned.

The decision makers in liberal cities insist they know better, haphazardly proposing the inverse to magnificent police work culminating in public safety success stories catalyzed by thoroughly trained law enforcement officers whose intuitive capacities are abundantly honed and calibrated by street experience to extreme’s most cannot fathom. Removing those who stave off catastrophes is in itself a catastrophe and invites evil elements who salivate over such antithetical maneuvers.

One glaring example is Berkeley, California’s city government, whose reconfiguring of traditional law-and-order principles is to significantly whittle down its police force and give birth to an all-new method of conducting traffic stops by what sounds to be non-law enforcement personnel doing police work without requisite state certifications to that effect.

As alluded to above, every state government mandates successful completion of a state-approved police academy from which cadets graduate and advance to a swearing in, reciting the police officers oath to enforce state laws via statutory authority conferred by respective Constitution. A citizen cadre of enforcement officials (Berkeley or any other city considering similar adoptions) lacks statutory capacity to cease motorists’ movements, already modeled by Berkeley Public Works employees possessing zero authority to pulling over free-roaming citizens operating cars and trucks.

Admittedly, Berkeley officials seek to have state laws rewritten so that they may launch their “model.”

As it relates to our topic today, should Berkeley have their way, their city will have far fewer visible and readily identifiable police officers whose mere presence is a crimefighting tool and iconic law-and-order advertisement (deterrent).

In Berkeley’s 52-page “reimagining the police” fairy tale, one of the “Recommendations” put forth to the city manager is to “Implement initiatives and reforms that reduce the footprint of the police department and limit the police’s response to violent and criminal service calls.” Although utopia is likely warm and fuzzy, criminals traveling in cars is a definitive reality. Another stark reality is that violent people operate automobiles, and anyone attempting to slow their roll is deemed a threat, thus setting in motion very bad scenarios. Just ask any bona fide cop. It is why police are trained at police academies.

Since we are analyzing a most glaring anti-police city government whose police reforms myopically couch total responsibility on sworn public safety professionals and condemn them when picture-perfect doesn’t materialize, and nary engender hardcore truths regarding bad actors romping raucously and creating injustices, we once again underscore the brand of governance consistently defiling the law enforcement institution. “Cops are the problem” is perhaps their most incendiary lie.

It is the hallmark of animus which we have been witnessing, especially with regard to the stale and baseless anti-cop statements, grossly twisted narratives, and unrelenting vilification of our country’s public safety professionals possessing far more courage than their antagonists (the ones who love to legislate at the multi-faceted expense of the U.S. taxpayer).

Liberal enclaves and their fiats (do what we say, no questions), their expensive overhauls (habit of throwing money at supposed problems which are non-problems), their seeming addiction to fantastical promise to garner/retain power, is routinely countered upon these pages, accompanied by irrefutable evidence counterpunching propagandists’ yarns.

While police-reducing cities’ leaders think they have it figured out and know what’s best for their jurisdiction’s citizens, proverbial proof is in the pudding.

We are starting to see these police-reducing communities’ about-face after realizing their knee-jerked policies are treacherous for the safety of the public. A simple study to test theories is to gauge crime stats when cops are present versus when they are sidelined by goofy governance with fingers crossed behind their business suits. Again, basic math amounts to significant truth.

Whether it be directly uttered or gesturally conveyed, people needing police assistance always extend personal gratitude toward law enforcement in any context deemed necessary. Approaching a stranger and saying “I’m glad you’re here” is not necessarily the norm. Acknowledging a cop is, for good reason.

Humans who find themselves in dire straits initially garner some solace from making the 9-1-1 call and hearing a voice say, “We’re on the way!” But the primary, tangible factor that resolution is at hand is observing one or more distinct police uniforms show up, assess matters, and take appropriate actions within the legal framework accorded via constitutional promise.

Sometimes rescuers in police attire show up spontaneously, just like the Florida state troopers who were out there, made observations, and investigated.

Just imagine the emotional sway going from 0-60, from grim and doom to utter elation after being saved by police officers doing diligent duty, much of which entails traffic enforcement often leading to some serious criminal catches and victims freed from nefarious clutches.

And it is mutual. Although our cover picture depicts state troopers from the Florida Highway Patrol addressing a routine traffic infraction and taking enforcement measures, imagine their surprise and professional pride upon realizing something far more sinister than speeding was afoot.

Indeed, the sight of a man or woman in police uniform assuring aid and comfort and apparatus to secure justice and sanctity certainly epitomes the customarily fulfilled “protect and serve” credo.

And these are the saving-grace individuals with justice shields that the know-it-alls operating liberal-laden governments want us to believe are not necessary. Tsk tsk…