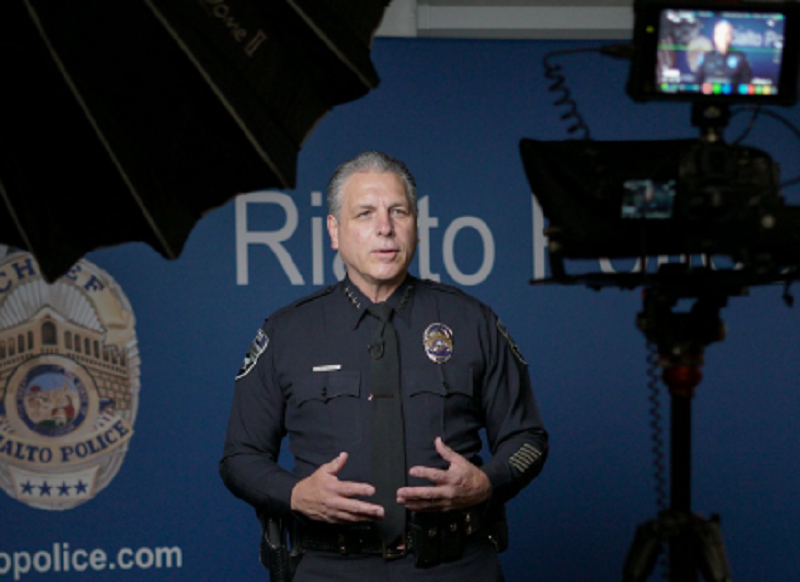 The burgeon of keyboard warriors commenting nastily to just about every police presser, while PIOs (public information officers) are dutifully conveying details to the public, has become an unfortunate aspect stemming from the anti-police movement. The vile and prejudicial commentary against the law enforcement institution has become downright despicable, needlessly taunting the already-strained psyches of cops doing surreal work in hostile, murderous terrain.

But there are communicators in the wing, telling it like it is with smart, level-headed, respectful articulations encompassing facts of the case and statutory pertinence. Police spokespersons field the dredge of negativistic news networks badgering PIOs for salacious sound bites. PIOs know better. Sadly, though, mainstream media twist the truth and launch erroneous interpretations, forfeiting reality and fueling commentors’ targeting police on social media.

Somewhat historically, police press conferences usually contained a statement followed by a barrage of questions by reporters who, although knowing better, flung hardball queries that police PIOs caught and kept gloved, mostly. Due to investigatory sensitivities and preservation of casework involving diabolical malfeasants who love to play mastermind games with law enforcement authorities, some details are justly kept under wraps.

Every cop in America attests to confidentiality clauses ordinarily contained in the litany of police protocols and policies, signing off that they “have read, understand, and abide” by this rule throughout all duty days.

Measured commentary is a necessity in police work. To untrained eyes and ears, the perception that the police are hiding something is relatively correct and easily explained; in many police investigations, keeping matters close to the cuff is essential to the integrity of factors and a driving force for how things unfold, culminating in solid police work, crimes solved, and perpetrators behind bars.

The slightest miscue can undermine an investigation, though. Victim(s) and their loved ones deserve stellar criminal justice proceedings, and cops at the podium assume the huge responsibility of being gatekeepers of sensitive materials regarding whodunnits and such. There’s a lot at stake.

Watch any docuseries having to do with criminal minds and you’ll learn how many of these warped psychopaths thrill at watching police press conferences, gauging how well their diabolical plans are panning out and challenging the police, at whim. Proverbial cat-and-mouse maneuvering. A chess game employing critical-thinking prowess.

Ever mindful of that, who gets to be the orator at police HQ or actual crime scenes? Who gets to be the spokesperson under the lens of criminal minds scoping out law enforcement’s investigatory progress?

Police figures placed in front of podium mics and walls of cameras may have come to The Job with formal education and experience in communications and journalism. Either way, most folks may be unaware of private-sector entities that specialize in honing the media presentation skills of sworn and non-sworn police PIOs. Not surprising in our digital age.

One source of the media-expert curriculum is the Law Enforcement Social group, whose representative explained their mission for/with police PIOs:

“Being a public information officer for any government or public safety agency is such an important role and there is such a big lack of training. Some of what we are talking about in this class are the laws that pertain to media access and what you can actually distribute to the media. We are also talking about social media when it comes to media relations. It plays such an important role now, and you have to be able to know how to properly craft your message for the media.

“The other thing we are talking about is interview skills: your do’s and don’ts [regarding] when it comes to doing interviews on camera or for radio.

“The biggest most important thing we are talking about in a hands-on format is how to properly prepare for and execute a press conference.”

These media communications training academies are of the caliber to expressly mentor law enforcement personnel through the gutter-sniping on social media platforms and elsewhere.

Invariably, you have seen this brand of ugly on just about any law enforcement agency’s social media site. Here’s one example among way too many…

Yesterday, I came across a somber, heartfelt photograph of a mixture of cops from various law enforcement agencies attending a nighttime vigil at a formal police memorial site, everyone holding a soft-glow candle in remembrance of the fallen. Pretty melancholy and humanistic, right?

Well, sure enough, in response to the poignant image, a keyboard warrior decided to unduly sully the comments section with the following prejudiced and vile comment: “Just another pack of cops looking for the next kid to kick in the face.”

That nastiness was typed into the platform of a metropolitan police department in the Midwest. The slander was there for all to see (not deleted) and not recent. I also realized the police agency’s social media-responsible party did not reply. Ponderingly, I figured no response is a good response. How does a police PIO address that level of invective and its graphic novella formed by the author’s misplaced angst? Why stoop to the same level of arrogance and ignorance?

It is easy to get caught up in the juvenile nonsense of petulant people targeting cops online, with keyboard warriors (also known as “keyboard gangsters”) going directly to police social media sites and pressing buttons to incite ridiculous arguments against the many values of law enforcement and the cops who perform admirably, even in the face of hate.

Employing basic human psychology, social sciences tell us that haters typically lash out due to their own personal, deep-rooted insecurities.

Cops anywhere know this quite well; doesn’t take long for any rookie officer to acknowledge the reality that some people will say/do hurtful things because they are traumatized by events of a bygone era, their psyches still hurting from long-ago circumstances. Self-composure, mindful processing, and considered compassion are elements of policing that help foster effective communications (versus knee-jerk reactions and inevitable rebukes by the public and command staff) when confronted by these types.

Nowadays, there seems to be a proliferation of police-oriented sites reminding cops to exercise patience and be more deliberate when confronted by public surprises (activists’ propensity for making noise and getting in faces), pressurized politics, and baseless accusations.

Professionally, I hold hands with the conventions of police work and proper presence, especially in the face of oppositionists who are good at goading. Not easy but doable.

One social media course for cops is called “Haters, Trolls, and Customer Service,” effectively teaching police PIOs “how to use keyboard judo to turn those haters into fans” while also covering “topics from platform security settings to standardized responses.”

On either broadcast news or social media channels, we see the calculus of police officials taking questions from journalists who pry and repeat (the expressions of I answered that 13 times already are easy to interpret upon PIO faces), unrelentingly, to the point of pure harassment (journo misconduct).

There is not much room for trial-and-error philosophies in terms of police press conferences just… winging it. Too much to chance. In our digital age, law enforcement organizations must also score points in public relations by exuding professionalism out in the field and in front of media mics.

Law enforcement executives must embrace confident and competent podium stature for when gaggles of reporters’ crossfire questions and fling barbs, trying their darndest to tease out details forming the basis of sensationalism and melodramatics, exploiting traumatic experiences encountered by victims/witnesses.

Some reporters are gnat-like and require metaphorical swatting; they may need a batch of tactful admonitions, redirecting them away from targeting sensitive info to which they already know they are not privy. How often have we witnessed this play out time and again?

Kinda funny how many people clamor for the limelight and attention, like it is our DNA to achieve notoriety as a nugget of success. This exploded due to the Internet serving as an infinite portal. Police personnel is not necessarily among this demographic, but they have been bringing their A-game when it comes to public relations, getting more strident with police communication skills.

In my neck of the woods, it is mostly police chiefs and sheriffs who opt to take the helm of media messaging and do quite well, a few especially shooting from the hip when reporters step across the boundary line and badger.

Polk County Sheriff Grady Judd comes to mind, a lot. His brand of handling any phalanx of reporters makes him a media maverick in my mind. For instance, when once asked by a reporter why his deputies shot a cop killer so many times, Sheriff Grady’s stoic-faced, dead-pan reply was somewhat sardonic: “That’s all the bullets we had, or we would have shot him more!”

Remember that? His local police presser response went public, nationally. The following day, at yet another presser, a local reporter questioned the sheriff’s because ran out of bullets comment. This is how it went down:

Sheriff Judd seems to relish confidence and conviction when it comes to the chronic games media reporters play.

Other police executives across the country have also gravitated toward taking the lead in messaging to the public, heralding a “the buck stops with me” mentality, speaking as the overall representative on behalf of their police organization. These law enforcement figureheads are also privy to mass communications pros, some right there among the ranks.

Years ago, my department elicited the assistance of a well-known major media network’s crime reporter who was a former police officer. Melding two dynamics together, this well-liked police-supporting news reporter stepped away from national TV exposure and into the private sector. Seeing a niche, he launched his own company, which specialized in mentoring sworn and non-sworn police employees in the realms of professional personalities messaging law enforcement proceedings to the viewing public.

That media maverick’s mentoring catapulted our agency pressers. It was remarkably noticeable. From this growth, other beat cops (who have been seasoned galore) put in requisite paperwork to attend these nouveau PIO classes and switch gears from shifts in a cruiser to moments at the mics. Ultimately, the city’s general public information officer (who didn’t have a lick of police experience) ceded to one of our police captains seizing the reins of reporting law enforcement information.

Although media messaging may seem like a dry side of police work, it is all the more imperative nowadays, with plenty of voices pushing guff instead of fact-based veracities embracing truth, sprinkled with police procedures and why/why not something was done the way it was. Citizens Police Academy attendees come away with different perspectives also…once they hear things straight from the horse’s mouth.

Only until I researched material for this article did I realize one reason colorizing why I’ve been seeing increasingly professional imagery among many police agency sites.

Generationally, the police profession has taken plenty of criticism over minimizing information when screamy-meemie reporters bark “The public has a right to know.” True to some extent but not necessarily, considering some of the sensitivities requiring confidentiality while the investigation grows legs for robust sleuthing and crime-solving.

Per revelations of Law Enforcement Social, classes are filling up as they traverse our nation and tutor cops in media-arts presentations for police pressers and public discourse.

Start evaluating police pressers. This dynamic, too, more than hints at police professionalism in every possible realm, so that public service is delivered by bona fide communicators whose organizations have hands in the fight for justice and peaceful existence, exposing factors by professionals who experience it differently than mainstream media operatives distorting it all to fill an ill-conceived agenda.