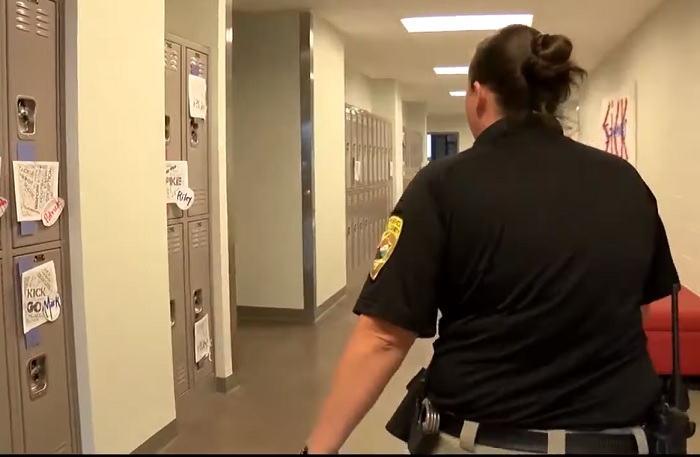 The public-school district I’ve lived in for three decades, and put three kids through, booted school resource officers out of schools last year, during the tidal wave of anti-police stupidity.

They used fake accusations of fake racism and fake fear to do it. The district alleged “students of color” recoiled in fear of police officers in the schools. The police chief shot back that for years school resource officers have had great relationships with students of every background.

School Board President Deborah Kilgore uttered this ignorant lie: “Given the facts of our highly-dangerous national and state systems of policing, supervision and incarceration, by being housed in our high schools — no matter how helpful and beloved they are — police are a real risk to many of our students and they contribute to stress and bad health for hundreds of children.”

FOX Q 13 News reported, Edmonds Police Chief Jim Lawless said, “…I believe that this decision was borne out of emotion, not data, and was hastily undertaken. I am disappointed that this process was not more deliberative and inclusive of all parties involved.”

So, it is pleasantly unsurprising that on the heels of leftist jurisdictions beginning to reverse their defund the police idiocy, schools are also starting to restore cops in schools. Unfortunately, not in my district, yet but in Pomona, California, cops are headed back to school. Following a four-month absence, according to the Daily Bulletin, a “majority of city leaders voted Monday, Nov. 15, in support of the move.”

Two “campus safety resource officers will return to high school campuses,” after the Pomona City Council, by a 5-1 vote, “approved a service agreement with the school district….”

However, as with my school district, some school officials continue to place their warped political ideology over the safety of their students. On a basic level is money in a bank, jewels in a jewelry store, or gold at a gold exchange safer with or without police guards. How is this premise any different with something far more precious—our children?

For example, the New York Daily News, via Police1.com, reported, “The kids are not alright.” They said schools have experienced a “surge in weapons seizures,” because “students don’t feel safe” because of a diminished presence of cops in schools.

According to the Daily News, “Fear of violence that has plagued New York City streets during the pandemic has seeped into public schools, with frightened students grabbing guns, Tasers and pepper spray to protect themselves.”

Since the beginning of July, at NYC schools, authorities have confiscated 787 weapons, an increase of 28 percent over 2018 and 2019. The 2020 in-person school year was essentially cancelled by Mayor Bill de Blasio’s and Governor Andrew Cuomo’s CCP virus lockdowns.

Boston may be even worse. If anyone hoped Boston’s new Mayor-elect Michelle Wu might not be an ideological drone, your hope has been dashed. However, how she governs will never compete with the fact the left considers her “successful” simply because her election was “historic.” Why? Because of what she looks like: an Asian and a woman, both of which are identity groups Bostonians have never previously elected mayor.

WBZ 4 News’ headline read, “Principal Patricia Lampron Beaten Unconscious At Dorchester’s Henderson School, Student Charged.” Wu called the crime horrific and tragic. She said she’s “reaching out to ‘all the parties involved.’” But that doesn’t seem to include the Boston Police Department.

Rather than the truth that schools need police, Wu preferred to issue this leftist drivel: “It [the attack] points to the need for us to really be investing in our young people, in our school systems, in the supports that are necessary” (Supports? Like police?). That is a pure garbage statement that means nothing and, worse, accomplishes nothing. It’s not even original. It’s tired, old leftist talking point-speak.

When “asked to clarify whether [her comment about the assault] means there should be police in Boston Public Schools, Wu simply said, ‘No.’”

Still, to end on a positive note, cops returning to Pomona Public Schools may be a sign of some political leaders coming to their senses. And, though there will be resistance from radical leftist ideologues, eventually, and unfortunately, tragic school incidents are likely to force resisters to eventually, inevitably put cops back in school to protect our kids.