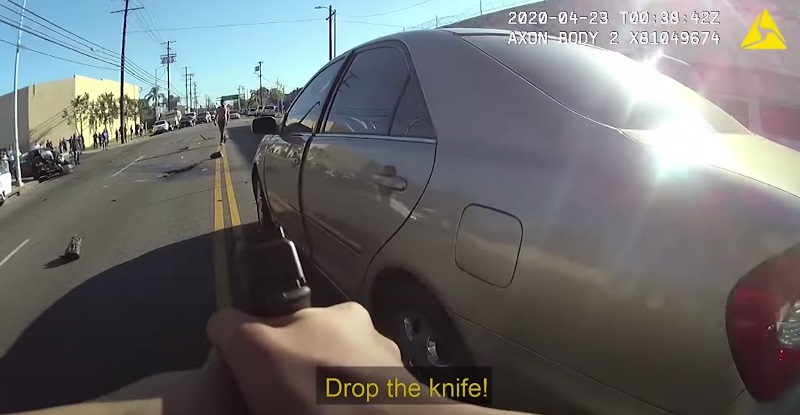 I’ve been writing that, in some high-profile (political) cases, it seems courts of law have replaced police disciplinary systems. Whether criminal or civil, officers acting well within their police authority and God-given right to self-defense are being dragged through the court system—for doing their jobs.

This came to mind when I learned the “The National Police Association (NPA) has filed a motion for leave to participate in Ninth Circuit case of Estate of Daniel Hernandez, et al. v. City of Los Angeles, et al., Nos. 21-55994 & 21-55995, which raises important questions about police use of deadly force. The NPA has filed briefs amicus curiae across the country in support of rules of law that recognize and support the discretion of police officers to respond to the difficult and often life-threatening circumstances to which they are exposed in their line of duty.”

I remember this case well because I wrote about it at the NPA back in July 2020. This incident struck me because it seemed the suspect’s family was using LAPD Officer Toni McBride’s proficiency in police skills against her.

As I wrote back in 2020, “Officer McBride is also a model who appears in gun magazines and is a skilled competitive shooter, something I’m sure her fellow cops appreciate. Having watched the video evidence available, Officer McBride is professional, competent, and calm under extraordinary pressure.”

Shamefully, they are accusing this stellar, compassionate officer of treating the suspect, Daniel Hernandez, 38, as if he were a gun range target. Everything Ofc. McBride did during that harrowing incident showed how conscientious and competent she is, including her attempts to deescalate.

To briefly recount the incident, Ofc. McBride and her partner, who was driving, were responding to a reported multiple vehicle collision. En route, the dispatcher informed them that the suspect had rammed several cars and was now “killing himself in his car.”

Callers informed 911 that the suspect was armed with a utility knife and “stabbing himself.”

The incident was video recorded on Ofc. McBride’s “officer body cam video,” as well as a couple of “bystanders’ videos….”

On arrival, the officers directed bystanders to safety. Witnesses told the cops the suspect had used a pickup truck to cause the collision and said he was in the truck. Within the chaos, as I also wrote in 2020, “Officer McBride requests back up, asks her partner if he has cover, and tells several bystanders to clear the area. In fact, in this apparently Hispanic neighborhood, she also asks bystanders speaking in Spanish to move to safety.”

Hernandez, holding a utility blade, steps into view from behind his truck. He faces Ofc. McBride. She issues commands for him to “stay right there.” Hernandez, grasping the knife, advances toward the officer.

Four times, Ofc. McBride orders him to stop and drop the knife. Instead, menacingly, he continues striding toward the officer. Having attempted to deescalate and under imminent lethal threat, Hernandez’s actions forced Ofc. McBride to fire to defend her life and end the threat.

Initially, she fires twice. The suspect goes down but immediately “gets back up and lunges…” toward the officer. She fires two more shots. The suspect falls again but, still armed, attempts to get back up. Ofc. McBride fires two final shots, and the suspect remains down and eventually succumbs to his wounds.

As I wrote, “Each of the two-round volleys were in response to the suspect’s continued aggression. He never let go of the knife.”

So, the family got a lawyer and is suing—of course. The complainant’s attorney, Arnoldo Casillas, blamed the officer’s “exceptional shooting skills…,” as reported by Dan Zimmerman at TheTruthAboutGuns.com, “they contend that she responded like the competitive shooter seen on video, racing to get off shots.” Casillas added, “She loves to shoot all these things as fast as she can.”

Again, how shameful of him to cast such a fine officer in such a wicked light.

This injustice motivated the NPA to help Ofc. McBride. In doing so, “The National Police Association filed with its motion a comprehensive brief addressing the latest science concerning police decision making in complex and dangerous situations and how such research compels deference to officer decision making.”

The NPA’s brief mines nuggets of critical minutia that explain what Ofc. McBride faced that affects a human being’s responses under such stress. The NPA writes, “Legal rules setting standards for officer behavior must take account of all these unavoidable human limitations.”

Despite these stimuli, Ofc. McBride performed brilliantly under extreme stress. She did precisely what her agency trained her to do. Hernandez could have dropped the knife and surrendered to police at any point before the first shots and then before the second shots were fired.

But he did not. I and many other observers also recognized the classic signs of “suicide by cop” in the suspect’s behavior, of which the NPA also presents detailed information in its brief.

The NPA concludes, “In its brief, the NPA warns that it would be ‘contrary to the interests of law enforcement and social order generally to create a rule of constitutional law denying the use of deadly force against armed suspects advancing on police officers….’ Police officers cannot effectively maintain control of violent offenders… and prevent further injury to the public if their only option available is to retreat until the suspects can somehow be controlled without the use of deadly force. That… poses an unreasonable risk to… police officers and the public. The U.S. Constitution does not require such a result.”