Skip to content
I Hate To Say I Told You So, But… 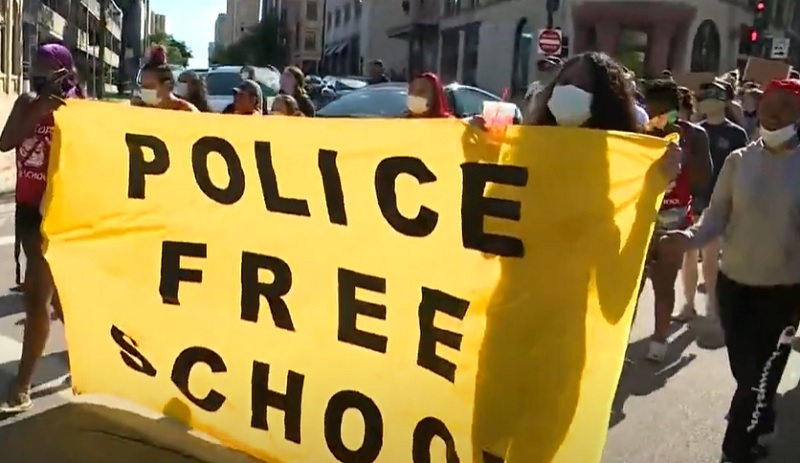 It didn’t take a prophet to predict the collapse of law and order when the anti-police movement virus spread from criminals and academic philosophers to politicians and government leaders. It also took no supernatural skill to predict that regret, backpedaling, and restoration would inevitably follow.

A prime example is the presence of police officers in schools. Mythology promoted by anti-police voices in general, with a big push by the National Education Association, encouraged the de-policing of schools. The NEA devotes a web page to the promotion of the Black Lives Matter agenda, the “school to prison pipeline” caused by school disciplinary measures, and their “Creating Safe Schools” position that states “When police and immigration authorities aggressively pursue enforcement activities on or around school property, they interfere with all students’ ability to learn.”

Perhaps one has to be of a certain age to remember the panic caused by school shootings in the Columbine age that continues today. A flurry of laws were passed about school safety that lowered the age to be tried as an adult for violent crimes and mandated that schools report criminal behavior to law enforcement. For college campuses, the 1990 Clery Act required detailed reporting and disclosure of criminal and delinquent behavior on campus to keep colleges from hiding dangers encountered by students. For better or worse, the public became keenly aware that, while schools are still the statistically safest place for children to be they are not insulated from dangerous behavior from students and outsiders.

Many school districts increased law enforcement presence on their campuses beyond the popular DARE (Drug Abuse Resistance Education) programs. Some schools developed their own specialty police agencies to serve their schools.

Now we have forgotten those realities. A prime example of the knee-jerk decision to keep cops away from schools was Alexandria, Virginia. In May of this year, the city council decided to pull their school resource officers because of accusations that uniforms intimidated minority students. Just five months later the council voted to reallocate those officers back into the middle schools and high schools. A spate of videos showing violent attacks in and near the school grounds reached the public with shocking effect. Superintendent of Schools Gregory C. Hutchings Jr. came to the city council saying “I’m pleading with the City Council this evening that we reinstate our school resource officers immediately.”

Meanwhile, in Louden County, Virginia, a parent whose daughter was raped in the girl’s restroom by a boy wearing a skirt, was arrested when he tried to passionately plead for the school to stop covering up the crime.

In Covington, Louisiana an 18-year-old student knocked a 64-year-old disabled teacher out of her wheelchair in what is believed to be in response to a TikTok “slap a teacher” challenge. The video of student Larrianna Jackson knocking the teacher over and punching her was posted on social media.

In San Francisco, a suspected gang member was arrested after a number of guns were found hidden in the Kezar Stadium bathroom during a high school football game.

In Arlington, Texas, a Timberview High School student allegedly had been repeatedly assaulted and bullied then brought a gun to school. A fight broke out on October 6th at 9:15 that escalated into gunfire that left four persons injured, two by gunfire. A .45 caliber handgun was eventually recovered in the investigation.

In Seattle at Ingraham High School where SROs had been banned by Seattle Public Schools, a dispute near campus spilled into the school’s parking lot where teens were threatened by a man in a vehicle pointing an AR-15 rifle at them.

All of these events occurred within the first two weeks of October 2021. Are our schools safe? The general answer is yes, but the exceptions are terrifying enough to cause intelligent citizens to regret the absence of law enforcement.