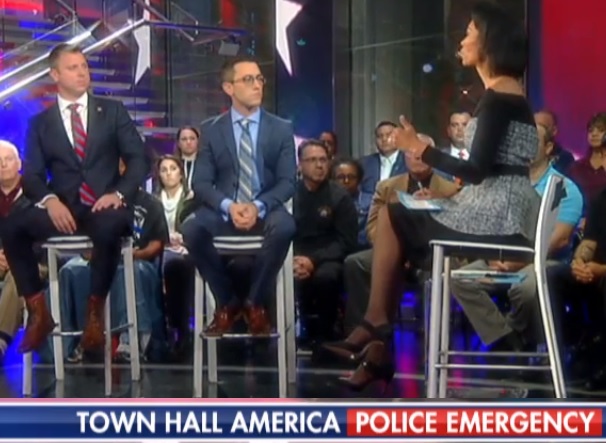 One of the toughest things for America’s law enforcement officers today is anti-cop activists and their incessant “education” of the public—our impressionable youth in particular—against police. Churning out anti-police myths from anti-cop politicians, the pulpit, the media, and academia.

It doesn’t seem to matter that the radical rhetoric doesn’t correlate to the statistical data, even that supplied by the FBI. In one prominent case, a study done by a Harvard professor collected data that shows cop shootings do not show racism. The liberal professor said the findings were “the most surprising result of my career.”

One thing that helps officers cope, is when prominent people and media outlets recognize the special circumstances law enforcement officers work under and recognize them for it. The FOX News Channel recently broadcast a special, hosted by anchor Harris Faulkner, called, Town Hall America: Police Emergency.

The show included a studio audience with many police officers. Also included were special guests, and Faulkner featured a Missouri police officer who was shot in the head in the line of duty. Not expected to recover to such a degree, though with heart-rending difficulty, he was able to communicate with the help of his wife. His children were also in the audience. He is the epitome of the risk all cops take and too many cops experience in service to their communities—even those who don’t appreciate it.

Both spoke passionately about improving conditions for cops by retrieving public respect for the profession. LiPetri said he was particularly concerned with last summer’s assaults on NYPD officers with water, buckets, and other objects. He said he’s introduced legislation to make it a felony to throw any item or substance at a police office.

While researching New York’s law on assaulting an officer, a huge part of the problem became apparent. An internet search brought up a law firm whose description for “Assault on a Police Officer,” in part, read, “In many of these cases, an NYPD officer will trump up assault charge in order to cover up the fact that the officers used excessive force in making an arrest.”

Gamaldi also spoke about the NYPD water dousing incidents. He noted that after the assaults there was a 14 percent increase in assaults on officers. To Faulkner’s question as to whether police are under attack, Gamaldi said, “Absolutely, one hundred percent, we are under attack.” He emphasized there is a police officer shot in America every 29 hours, and there has been a 24 percent increase in police shootings over last year.

People have to understand for how long police officers have been waiting for people to pay attention to the problem from the cops’ points of view and not just cop-critics. The eight-year drought when Obama/Holder held the federal criminal justice system reigns weighed heavily on police officers, as the DOJ led a pogrom against local police agencies across America. That DOJ never met an agency that didn’t deserve contempt—oh, and a federal consent decree.

Earlier this year, Attorney General Bill Barr gave a refreshing speech, which I was thrilled to write about. I began the piece with AG Barr’s opening quote, “To my mind, there is no more noble profession than serving as a police officer. You put your own life and well-being on the line to protect your communities.”

Contrast that to DOJ statements under AG Eric Holder. From the New York Post, “The [DOJ] said, ‘many in the community perceive that pedestrian stops are overused and target minorities.’ It admits it couldn’t verify the accuracy of the complaints and never bothered to get the cops’ side of the story.” I know! That particular quote was about the DOJ investigating my department.

But there’s still work to do. Especially when law enforcement leaders like Chicago P.D. Superintendent Eddie Johnson disrespect the President of the United States by snubbing President Trump at a recent speech he gave to the National Association of Chiefs of Police, in Chicago, which makes it even more egregious. Johnson was hosting the event. Retired Sgt. Besty Bratner Smith’s wrote an excellent article on the topic here.

As Chicago’s top cop, Superintendent Johnson wasn’t only disrespecting President Trump. He was disrespecting the highest office in our land. During my career, I was assigned to protection details for several politicians with whom I vehemently disagreed politically. President Bill Clinton, President Jimmy Carter, and Washington Governor Christine Gregoire, to name a few. The latter two I met personally and politely shook their hands.

I was showing respect for their offices, which in turn I was showing respect for my own office. By Johnson’s example, should I have refused these assignments? Yeah, I’m sure that would have been a great career booster. Or is Johnson exempt because he’s the boss? Or because he’s a Democrat? Or because President Trump is a lesser president because America’s great unwashed, Republican and conservative, voters voted for him?

This shows why speeches like Barr’s and TV programs like Faulkner’s are so important. Cops need to know their leaders are behind them. Not just hollow words written a politician’s aide and decanted by a politician only after another cop is killed in the line of duty. I could have watched another few hours of the regrettably short program. Still, it felt good to see such a pro-cop broadcast.