Skip to content
Bill Barr: The AG Cops Have Been Waiting For 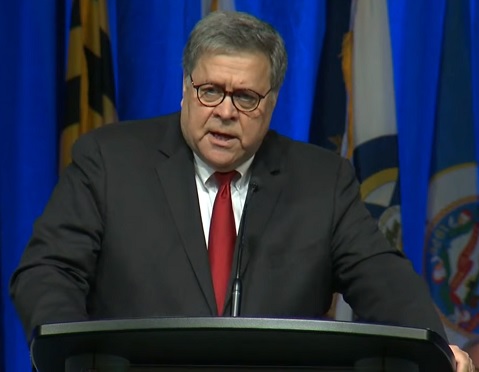 “To my mind, there is no more noble profession than serving as a police officer. You put your own life and well-being on the line to protect your communities.” – Bill Barr

For law enforcement officers, this recent proclamation U.S. Attorney General Bill Barr gave during a speech comes as a warm blanket on a frigid day—or decade. No profession in our great nation has suffered more derision from more people who should know better than America’s cops.

AG Barr delivered the above sentiments in New Orleans, Louisiana at the Grand Lodge Fraternal Order of Police 64th National Biennial Conference. He described cops putting on their uniforms, badges and guns, kissing their families goodbye, and then going off to work as a “special kind of bravery.”

Unlike the military going off to fight a foreign war, Barr said, fighting the war on crime, “there is never a final victory.” These kinds of sentiments are words cops have wanted—needed—to hear, especially from such a high platform. The drought in federal support and outright antipathy during President Obama’s eight years has been devastating to American law enforcement.

Any official can utter nice-sounding but insincere words and they often do. But not only did Barr hit the right notes but also, he sang a sincere aria of praise for the nation’s cops. Between the “chaos and the carnage” and the “civilized and tranquil society we all yearn for,” he said, “is the thin blue line.”

Remarking at how much tougher it is for cops today, he noted, “even in the best of times there is no tougher calling than serving as a police officer.” Commenting on how some anti-cop factions have turned reality inside out, he said some people are treating police as the bad guys and criminals as the good guys.

Barr’s speech showed that he gets it. He understands the unprecedented challenges today’s cops face. While officers have always had critics, never have so many of them been in positions of authority, including in the White House.

Barr said, “In recent years, we have witnessed an increasing toleration of the notion that it is somehow okay to resist the police.” Which he labeled “unacceptable” and a “serious crime.” He said people used to understand you don’t resist the police. Resisting places the officer, suspect, and bystanders in jeopardy. People should “comply first and complain later,” he noted.

Barr also spoke about the media hyping officers’ actions when they must use force, but the suspects’ resistance goes unmentioned. And, in a declaration that garnered much deserved applause, he said, “Those who resist must be prosecuted for that crime. We must, and this department will, have zero tolerance for resisting police.”

The AG expressed his disgust with the recent disrespect of the NYPD. He spoke as if he’d just chomped on a piece of rotten fruit. He recounted the “prancing punks in New York, dousing officers with water and hurling plastic buckets at them.” He also cited the over 60,000 assaults on NYPD officers per year, a 20 percent increase between 2014 and 2017.

Barr said the administration will propose legislation to address the increasing violence. For mass murderers and cop killers, he wants a “strict timetable” for trial. He said this “will allow the imposition of the death sentence without undue delay.” He put a cherry on top, saying, “Punishment must be swift!”

He then went on to something I’ve been writing about for years. The proliferation of prosecutors who don’t prosecute. Seattle City Attorney Pete Holmes, Suffolk County (MA) DA Rachel Rollins, and Chicago DA Kim Foxx come to mind. Though their numbers are ballooning.

Barr referred to these folks as “social justice reformers” who do not enforce the law, refuse to prosecute criminals—even for resisting arrest—or encourage lenient sentences and undermine the cops. He said they were, “Anti-law enforcement DAs.”

The nation’s top law enforcer urged communities to know what’s happening with their law enforcement agencies. He said not to take cops for granted and that people should have “a new appreciation for the noble work cops do.”

Barr said people need to recognize cops for doing the “toughest job in the country,” and it “is getting tougher.” “The thin blue line is getting thinner,” he said, noting the number of cops has been decreasing. Along with the poor treatment from anti-cop factions, he pointed out that with a great economy and other better paying, “safer jobs” available, the best candidates are no longer seeking careers in law enforcement. Cities are finding it difficult to maintain safe staffing levels.

I recall a story from KOMO News 4 that revealed in one city where the Seattle Police Department sent recruiters, “no one showed up.” Barr noted the obvious, but which more people need to say out loud. If society makes cops’ jobs harder, people will not want to become cops. Those who still do will apply in jurisdictions where people respect law enforcement officers and the rule of law.

Refreshingly, Barr provided a reminder that “The very first duty of government is to provide for the police.” Nothing else, except crime, functions without public safety. He spoke of properly funding the cops. He talked about the opioid epidemic, the crime it creates, and also addressed people who commit gun crimes. The AG brought up that after falling precipitously since 1992, the violent crime rate rose under a lax Obama administration.

In conclusion, Barr said that since America’s first cops, Boston’s Night Watch, began patrolling in 1635, there has been a “Proud tradition of professionals who stand guard against those who would do us harm. You are the latest in that noble line.”

For America’s cops, Barr’s words are not just a long-awaited, well-deserved pat on the back but also feels like a warm embrace. I began this with a Barr quote, so I’ll let the Attorney General have the last word.

“This administration has got your back.”