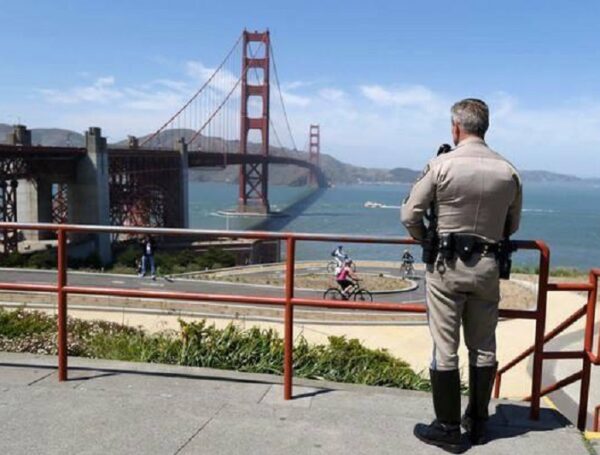 It’s not every day that law enforcement officers get to receive kudos for phenomenal police work, and that is certainly not why courageous people enter the perilous business of public safety. Given its decentralized infrastructure, the roughly 18, 500 law enforcement entities spanning the U.S. chronicle life-saving feats and dividends thereof on respective local levels. In essence, most folks see only a minuscule measure of marvelous police work, and the saved lives which go on to prosper exponentially.

That last part may be something the anti-police firebrands and police defunders want you to believe are mythical. Thankfully, most know better.

Ponderous and musing over how many lives were saved by cops in both individual and aggregate realms, researching related material toward that end, I came upon a police figure whose persona perfectly illustrates today’s subject matter.

In 2005, California Highway Patrol (CHP) Sergeant Kevin Briggs (now retired) saved a man who was teetering on the brink of a bridge, in despair and ready to end it all. Underscoring the salvation of Kevin Berthia, the man who Officer Briggs pulled from the awaiting demise facilitated by the San Francisco Bay waters (described in a brief video below), the almost-end of a life translated to exponential dividends and all new beginnings.

Although the triumphant results did not evolve overnight, Mr. Berthia rekindled purpose in life and parlayed his existence by becoming a father (more on that in a moment), before opening his mental health advocacy Foundation.

In respectful context and with dutiful conviction, Briggs effectively several lives on that bridge—Berthia and yet-to-be-developed family.

Having been one, this is exactly the brand of humanitarianism cops endeavor, from which battered badges unrelentingly forging against foes and segments of society whose utopian expectations counterintuitive, can be necessarily rejuvenated and mobilized to the next save(s).

And it seems on to the next save was a staple ingredient in Sergeant Briggs’ career, culling lives of 200-plus suicidal people, most of whom were patiently and meticulously talked out of jumping from the Golden Gate Bridge outer rails. Over 200 lives continued, thanks to one cop!

The enormous life-saving successes credited to Sergeant Briggs transcended, garnering him the name “Guardian of the Golden Gate Bridge” and a book titled the same, whose Afterword is written by…Kevin Berthia.

As any law enforcement agency whose name implies concentrations in traffic enforcement and largely educating motorists on roadway safety, like any cop specializing in particular law enforcement functions, men and women working in the justice field organically come upon severely distraught individuals who are mired with life’s complexities and burdened by dire straits.

As a rookie CHP policeman, Briggs was assigned to what is traditionally referred to as the “Golden Gate Bridge beat,” responsible for enforcement of traffic laws. That was just the small of it, he’d come to find out. “I had no training before I went out there—it was just a beat I was working,” Briggs shared with California TV show “Your Morning.”

The CHP police academy is where he learned to become an effective law enforcement officer with gobs of training to do so. What he referred to in the quote above is lacking training in non-traffic-related aspects, specifically suicide prevention strategies.

In the realm of “quick studies” we sometimes hear about, Briggs fit the bill, compellingly. Per a blurb published in Life Daily, “It didn’t take long for Briggs to find out that desperate, suicidal people would flock to the bridge so that they could end their pain and suffering.”

Thus, his traffic enforcement duties were superseded by minding the bridge and the lives of others who saw it as a finale.

Minus academy training pertaining to interactions with suicidal persons, the learning curve seemed to fill that void, resulting in novel beginnings and not finales.

In an interview with the Press Democrat, Briggs explained, “I would ask people when they came back over [the bridge’s railing], if they wouldn’t mind me asking, ‘What did I say that was good and what did I say, what actions, were [deemed] poor.”

His methodology denotes reciprocity, the proverbial two-way street among people sharing pro-con feedback. In his case/career, Briggs tailored his approach (literally and figuratively) and studied human psychology via on-the-job realities. All cops are subject to such an exposé, encountering and mitigating myriad situations on behalf of an expansive diversity of people, most of whom summon cops for resolution of seemingly untenable problems.

Suicide is the on the extreme end, and law enforcement officers navigate the highly sensitive nature of humanity, all its components, every solitary nuance, toward hopeful outcomes.

In his retirement, Briggs serves as a suicide counselor and travels to venues around the nation, speaking about his experiences as a California cop and the many salvations toward which he extended his hands, confronting human despair of others, the dynamics of suicide, and hope:

Notice in that brief video how he mentions lack of training; now frame that in the context of how knee-jerking politicos seemingly find it trivial or non-vital to fund our nation’s law enforcement officers.

Also note the letters received from strangers imploring the life-saving feats performed by Briggs and police cohorts doing similar deeds, each tabulating manifestations of doing a job on behalf of humanity.

Furthermore, Mr. Briggs subtly hints at the toll taken on America’s police officers, understandably their own mental health absorbing impacts, often unmitigated, some sidestepped by their very own police administrations. Yet these duty belt-harnessed humanitarians return to the street beat day after day, grappling with the dregs of society as well as the salvation attempts that didn’t pan out according to plan.

In his testimonies, Briggs acknowledges the two bridge jumpers he couldn’t save and how that weighs on his own existence, even in police retirement.

I have my own phantoms who pass through my lobes from time to time, those whose cases involved woes and pleas and resolutions. Whether abated or recidivated, all compel wonder similar to Officer Briggs’ incorporated feedback toward improvement.

As our country progresses, so do our police professionals, fervently aiming to deliver stellar public safety services despite the defiling emanating from certain politicos and full-time haters projecting vileness.

Lately, I’ve been introspecting about the enormous patience of police, subjected to such an enduring span of abject abuse by those whose stance is baseless and ludicrous and conjoined by myopic clones.

Speaking of patience, our topic today has such a virtue as a pre-requisite feature. As the Life Daily article conveyed, “Once a person allow[ed] Briggs to speak, he would ask how they were feeling or if they had plans for tomorrow. If they didn’t have plans, he would help them make a plan. Mostly, he would just listen to them.”

That sounds like Bridging the Gap 101. Also mimics perfectly well what cops do on the daily, equating to exponential successes and dividends throughout subsequent days.

We may never know the aggregate across-the-board gains perpetuated by police personnel, but Mr. Berthia climbing back, becoming a father, and his mother/family befriending Officer Briggs, is a handful of pluses from one police act.

In effect, policing is a business using multiplication whereas police naysayers stay with subtraction—the latter shameful, the former heralded.

I’m thinking a certain life-saving Cali cop is enjoying unclehood in his police retirement. Grateful there are about 850,000 others carrying on the same mission in life.