Skip to content
Defunding the Defunders – Baltimore’s Victims Fight Back 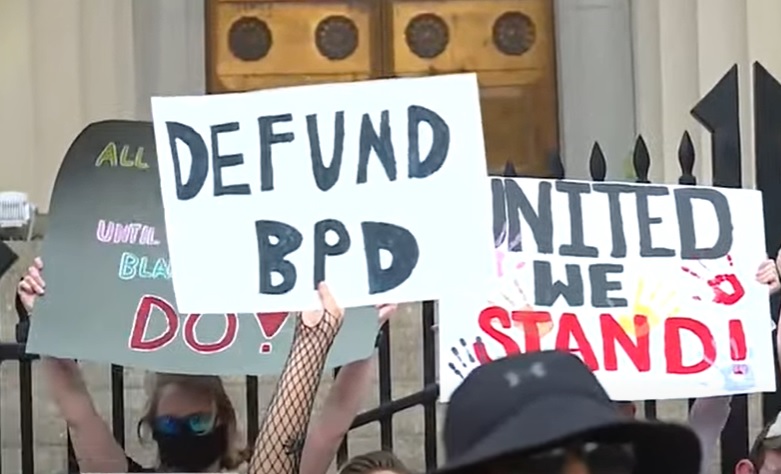 The Baltimore Sun is reporting that businesses in the Fells Point, a historic waterfront neighborhood, are fed up with unchecked criminal activity. Established in 1763, the area was once a bustling ship building port. With over 300 buildings on the National Register of historic buildings the area is rich with eateries, museums, and events.

A letter from nearly 40 businesses in the area states “prostitution, public urination and defecation, and the illegal sale and consumption of alcohol and illicit drugs on the streets, we know these crimes are not as serious as the carjackings, shootings, and homicides that have become routine,” the letter reads. “But, as this past weekend proved, a culture of lawlessness rarely remains confined to petty offenses and invariably leads to the kinds of violence and tragedy we witnessed late Saturday night”, referring to the shooting of three men over the weekend.

“What is happening in our front yard — the chaos and lawlessness that escalated this weekend into another night of tragic, unspeakable gun violence — has been going on for far too long,” said the letter in which the businesses stated their intention to put tax payments in escrow until the situation was resolved.

Baltimore was one of the early adopters of defunding the police by elimination $22 million from the police budget. Only the Scarecrow from the Wizard of Oz – lacking a brain – would have been surprised at the surge of crime that followed. The city reversed course, proposing at 2022 budget of an additional $28 million. The letter stated that “it’s pathetic that we have to ask for these basics.”

Quality of life and order maintenance efforts are always among the first to suffer from funding cuts to police. From either official edicts to stop directing enforcement of parking laws, drinking in public, and littering or just being too busy dealing with increased violent crime with fewer resources, citizens note the truth of the old saying that if you give and inch they’ll take a mile. The protesting businesses are lamenting the increase in a “culture of crime”.

These social experiments are costing lives. As the Washington Examiner’s Byron York noted recently, “Los Angeles has cut its police budget by $150 million. Seattle has cut $69 million. San Francisco has cut $60 million over the next two years. Denver has cut $50 million. All the cuts are between 10 and 20% of the cities’ police budgets.” Moreover, cities such as Houston, Oakland, and Portland, Maine, have barred their police from serving in certain roles (on school grounds, for example), and Atlanta’s mayor has even been making noises about closing the city jail.

Defunding costs lives. Baltimore’s murder rate is up nearly 20% while Marilyn Mosby, Baltimore’s notoriously anti-police prosecutor cut back on prosecutions during COVID. Mosby announced that drug possession, some sex workers and other misdemeanor offenses would no longer be prosecuted. “Clearly the data suggests here is no public safety value in prosecuting these low-level offenses,” Mosby said. She touted an 80% decrease in drug arrests, but that was after announcing that she instructed the police department not to make drug arrests during the pandemic. Crime rates will go down when you decide they aren’t criminal anymore. Violent crime rates remained high, with the exception of street robberies during the pandemic where fewer victims were exposed to public places. Mayor Brandon Scott says the violence is unacceptable and urges that “we have to be better as citizens”, blaming, of course, guns as well as poor citizenship.

Baltimore is part of the list of cities who have responded to protests, violence, and activism with the knee jerk response of cutting police budgets. They include New York City, Washington, D.C., Baltimore, Philadelphia, Los Angeles, San Francisco, Atlanta, Minneapolis, Seattle, Salt Lake City, Portland, Oregon, Hartford, Connecticut, Norman, Oklahoma, and Austin, Texas. So far, we’re not hearing of the glorious success of less policing resulting in a higher quality of life. No one is saying “why didn’t we do this a long time ago!”, and no one feels safer except criminals.

Maybe more victims – both individuals and businesses – could follow Fells Point’s lead and defund the defunders.