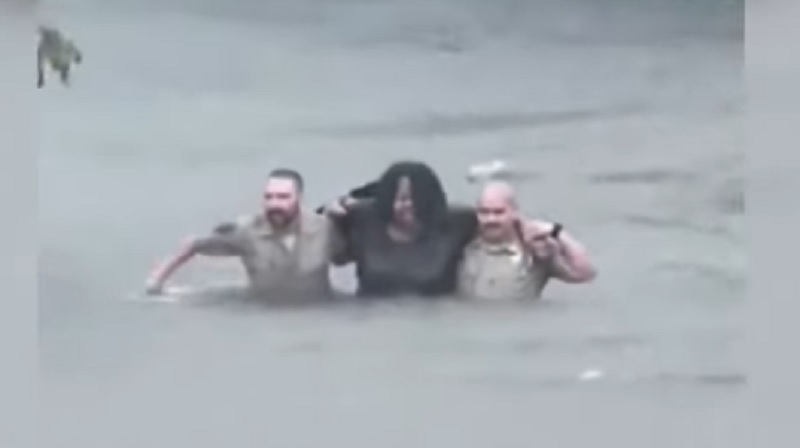 I read a report and saw a video on Twitter the other day about police officers rescuing people from a flash flood in California. While the officers, who appeared fit, could navigate the raging knee-high water cascading down the slick street, a woman and her children could not.

People were in danger, and police officers went to help them. That’s what cops do, right? But it got me thinking about developing that reflex to help people by overcoming a human being’s natural instinct for self-preservation. This true virtue describes the vast majority of cops.

While the rescue was inspiring to watch, as those San Bernardino police officers brought that woman and her children to safety, I was distracted by another aspect of the incident. Sadly, a much less commendable story.

As the officers performed the rescue, people hindered them by continuing to drive by, causing their vehicles to splash churning water onto the cops and the mother and her kids they were trying to save. Several times, rather than stopping to help, drivers continued past the scene, making things harder rather than easier for the cops.

It made me think of other recent similar incidents where people are in trouble, either cops or civilians, and bystanders either just watch, sometimes while capturing video on their phones, or they simply walk away.

For example, the recent infamous scene from a New York City subway lobby where a thug brutally beats a woman, tossing her into a metal ticket counter, and launching a barrage of punches to her head.

A man, doing more than most, can be seen changing directions and heading toward the incident. He appears to be telling the suspect to leave her alone. But when the suspect moves toward the man, he changes directions again, retreating through the turnstiles, and fleeing, leaving the man who continues beating the woman.

There’s also the videotaped incident where a suspect, I recently wrote about at NPA, actively resists an officer during a traffic stop. Though that officer is currently being mistreated by the criminal justice system, unjustifiably charged with a crime, something else happened at his scene, also captured on video.

While the officer is on the ground, in someone’s front yard, fighting with the resisting suspect, a man opens his front door and walks out onto his porch. He’s maybe 15 feet from them. He watches as the officer struggles with the suspect over the officer’s Taser and does nothing. Finally, after he seems to get bored, he goes back into his house.

Because of that adult man’s disinterest in being a good, responsible citizen, the incident ended in tragedy. Fortunately, the suspect didn’t kill the officer, but the suspect would not let go of the Taser, and the officer was forced to shoot and kill the suspect. If that neighbor had chosen to help the officer, that other man would likely be alive today.

I’m not saying there aren’t good citizens who do help cops in harrowing situations, even sometimes risking their own lives. I recall two Whatcom County (WA) sheriff’s deputies who were ambushed, wounded, and pinned down by a man with a rifle. Both deputies suffered gunshot wounds. In keeping with our theme, one deputy was shot while moving to assist his wounded partner.

Fortunately, a couple of Army vets lived nearby and saw what was happening. They got their families to safety and then went into their houses to retrieve their weapons and, after a gun battle, assisted the deputies with taking the suspect into custody. Yes, those good people do exist, but they are obviously not the problem; they’re a benefit.

According to FOX News, one of the Good Samaritans said, “You hear a shot ring out, and officer Thompson fell backwards. We got the kids inside and went in and got our weapons.”

In Fulton County, NY, according to WRGB News, via MSN, an Army veteran stopped to help a deputy struggling to arrest a suspect. And it was a good thing he did. Reportedly, his backup was still 20 minutes away.

People don’t help the police for many reasons, and sometimes it makes sense. Sometimes people trying to help can cause more problems for officers. But I’m thinking primarily of the lone officer starting to lose the fight. Whether it’s because of hesitation or fear of using too much force because of “woke” local politicians and a corrupted criminal justice system or some other reason, it doesn’t matter. The cop needed help.

Please don’t allow the anti-police minority to influence your decision not to help an officer in need, if you’re capable. Think for yourself, and you’re much more likely to act in a way that helps rather than hurts your community.

Sometimes just an extra pair of hands can help prevent injury to both the cop and the suspect. I’m not calling for everyone to put themselves in danger, no matter who you are or what the situation is. But if you are capable, and you can help a victim of violence, cop or civilian, with the glut of fake virtue signaling swirling around, today, real virtue is very much needed and appreciated.