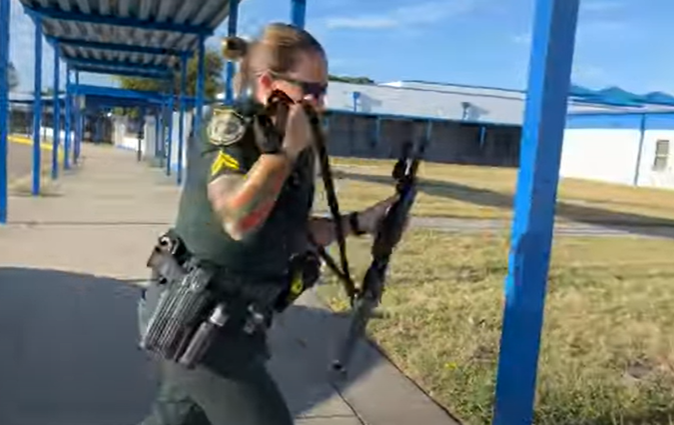 A few days ago, with the new school-year horizon in view, Brevard County Sheriff Wayne Ivey announced investments in evil-stopping equipment for his school resource officers (SROs) assigned to school campuses throughout his coastal county.

“Our children and our teachers will be protected at all costs,” said Sheriff Ivey.

With application to public safety presence at our school campuses, Sheriff Ivey reiterated a Sun Tzu quote: “Every battle is won or lost before it’s ever fought.”

The inherent meaning of that philosophy conveys the requisite preparedness of warriors guarding the gates with every means of protection…so evil-doers are stopped dead in their tracks (if not dissuaded).

“While I pray it never happens, I can assure you that our Brevard County Sheriff’s Office School Resource Deputies are prepared to win the battle to protect our children and teachers!” said Sheriff Ivey.

By now, we all know about a political party that sought to displace police officers from protecting schools. That notion lacked any merit and only served to influence the red-horned ones thirsty for blood of innocents.

By now, we all know about Uvalde and the seemingly systemic breakdowns resulting in utter horror.

While our nation still reels from an abundance of mind-bending events fueled by hatred and fanned by political pander, the public safety mission still stands amid the smoke and mirrors generated by the anti-police manifesto.

The law enforcement institution is a permanent pillar. We are referring to cops as a staple ingredient in American society; it will always remain so…as long as criminals are being granted lush liberties to prey (again) on innocent citizens deservedly concentrating on a peaceful existence.

Proof-positive can be found in myriad inexplicable events and loss of life caused by criminal deviancy… all of which saw cops responding, despite all the hatred at their backs, fronts, and flanks, notwithstanding the dwindled numbers of police personnel stemming from an onslaught of denigration sparked by devious politicos. Such a disgusting spectacle… Thankfully, though, cops will be cops.

“Making schools a hard target” is what Sheriff Ivey stated is a concrete objective, evincing all the wares of a warrior so that would-be assailants harboring hatred are dissuaded or, absent that, readily thwarted before unleashing evil and promptly taken into custody without incident. 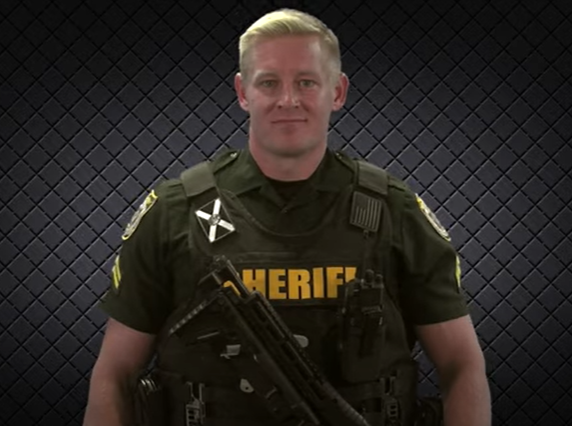 With an unambiguous eye-poke, Brevard County’s top cop bellowed, “You are not coming into my schools and killing our children!” Kind of bittersweet. That any public safety official is compelled to utter (reiterate) such words packed with enormous connotations is sobering.

Roughly 1,064 miles to the west of Sheriff’s Ivey’s jurisdiction, Houston County also adopted a tougher stance on the potential for active shooters and SROs adequately trained/equipped to stop them. Days ago, the Houston Independent School District (HISD) allocated $2 million toward equipping school police with body armor, rifles, and ammo.

“The bigger issue here is assuring that [officers] have all of the tools possible so that they can be as safe as possible and provide the kind of safety that we want them to provide for our campuses,” said HISD Superintendent Millard House II.

“The equipment we purchase that the board approved is mainly for active-shooter incidents. Officers are not going to be walking around campuses with rifles slung across their back or their shoulders or carrying shields.” It’s a conscience-raising step in the right direction.

Most folks are likely unaware of the intense and chronic training exercises cops invest in at schools throughout the off-season, mostly in the very same schools they will be patrolling/securing once the new semester kicks off.

The active-shooter training to which I refer involves not only SROs but also cops assigned to various other units cementing the public safety mission. The proverbial “call-out” summoning specialty teams such as SWAT and Crisis Negotiations comprises a well-rehearsed conglomerate of cops trying to preempt malfeasants’ violence while also striving for an unflawed response and salvation for all.

Nevertheless, public safety must be as sharp as a thorn and prick those who dare snub a nose at constitutional values and human decency.

Law enforcement agencies generally advertise large-scale training events at schools, mostly due to the potential use of things that go boom and first responders enacting what may be mis-perceived as a real response to life-threatening elements. Police-placed signage may help allay such misinterpretations and stem the fears born of activities by police engaged in harmless training sessions. 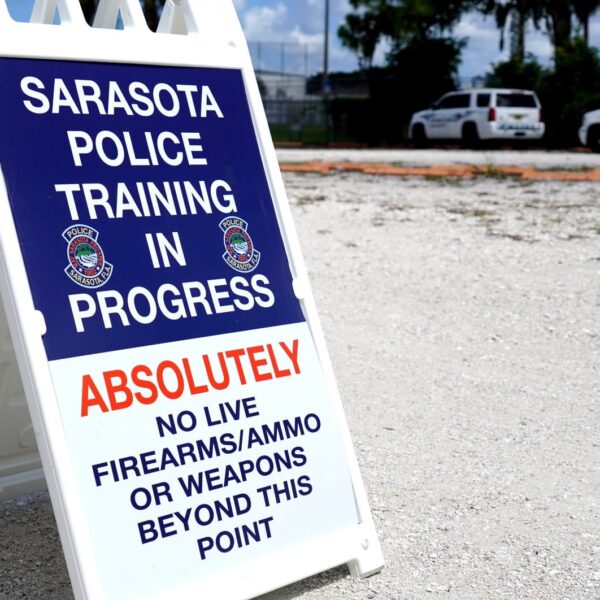 Although there’re plenty of loaded firearms and accessible ammo along for any purpose involving on- or off-duty cops, training sessions among law enforcement entities include fake firearms and rifles (usually distinguished in either red or blue resonated replicas of the real thing). Hence the meaning of the sign/directive you see in the above image deployed by Sarasota Schools Police officers cross-training with other public safety agencies in Sarasota County, Florida, and on varying school campuses.

As for mock police scenarios, you won’t necessarily find legacy media putting out the word, in essence forfeiting the opportunity to at least compel those possessing a destructive mindset to reconsider. Doing so would torpedo mainstream media’s ludicrous support of the anti-police script and sink their money-making clickbait coffers, while lies are perpetuated for even more pennies.

Having endured 12-hour-long active-shooter-based training sessions at our city schools, plenty of water is involved. Public schools generally reduce power consumption in the off-season’s warmer climes, conserving tax dollars while cops hone response disciplines. For the sake of reality, nothing is cheapened in training modules: wearing body armor in a non-air-conditioned school is at least mitigated by rehydration and breaks from the action.

Trivial tidbit for today: Febreze was/is a go-to for those who don ballistic vests for a living.

From the Police Pulpit

As has become more of a ritual over the past few years, law enforcement executives are taking to the mic much more, disseminating dos and donts advice, educating the public (akin to the NPA’s mission) about the stark realities of monsters roaming society and the cops who guard the gates on behalf of the citizenry.

Cops know the depth of human depravity and the psyche of sinister individuals clinging to evil ways.

“It is my prayer that this new level of preparedness and immediate ability to address the threat will prevent an active shooter from ever walking onto one of our campuses and trying to harm a child.” Who wouldn’t want to get behind that?

They’ll likely be naysayers opposed to the appearance of SROs presiding over school safety while donning tactical gear and strapped rifles. Seems this look is better than the eyeballing carnage at various other schools in which active shooters traipsed and unloosed utter havoc, no?