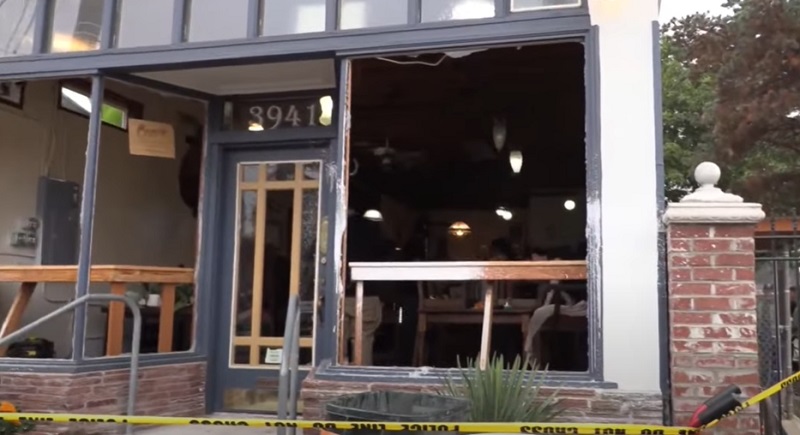 Portland, Oregon police continue to seek to connect with their community even after all they have been through. They planned a Coffee With a Cop event at Bison Coffee House, a neighborhood coffee shop. Coffee With a Cop has been a series of events offered by local police agencies at local establishments where citizens can drop by and chat with law enforcement officers. Events are usually cordial, well-attended, and a great bridge-building activity.

There are enough bridge burners in Portland that six masked criminals shattered the windows of Bison Coffee House at 3:00 a.m. the morning before the neighborhood event occurred. The news reports referred to the offenders as vandals and the crime as vandalism. The more accurate term would be terrorists doing terrorism.

Owner Loretta Guzman is an enrolled member of the Shoshone-Bannock Tribes. In addition to the suspects smashing windows with hammers and crowbars. Although the attackers apparently did not enter the building, they did spray what appeared to be fire extinguisher powder into the business. The thousands of dollars of damage includes the residue on Native American artwork and an authentic buffalo head on the wall. Authorities have considered adding hate crime charges in the attack.

To Guzman’s credit she courageously still hosted the event that evening after cleaning up and baking a fresh batch of homemade bakery items for the shop. A GoFundMe page was established to help pay for the damage.

Federal law (18 USC Ch. 113B) defines terrorism. Under the heading of domestic terrorism the definition is “acts dangerous to human life that are a violation of the criminal laws of the United States or of any State; appear to be intended to intimidate or coerce a civilian population; to influence the policy of a government by intimidation or coercion; or to affect the conduct of a government by mass destruction, assassination, or kidnapping”. Far beyond mere mayhem and property damage, and even beyond a hate crime if partly driven by Guzman’s heritage, the acts seem to be well aligned with the definition of domestic terrorism.

A man walked into the 10th district West Side Chicago Police station on Ogden Avenue mumbling and ranting anti-police sentiments. The man was holding a plastic bag through which was visible what appeared to be a gun and pointed at officers in the building. Officers fired in response to the threat, sending the suspect to the hospital with non-life-threatening injuries. No officers were injured.

In an earlier and unrelated incident, another man managed to enter a training area on the fifth floor through a fire stairwell during a Chicago PD training, picked up weapons that were nearby, and pointed them at officers. Armed officers in the room fired and wounded the man.

These recent events are not unprecedented. During the protest riots of 2020, Aurora Police officers were trapped in a station under assault for seven hours. Evidence of the intent to harm or ambush the officers included stashed weapons and tools for arson found after the crowd was dispersed. In July a 20-year-old man was arrested after video showed him firing a shot through the glass at a police station in Riverside, California. In April, the friend of a man who died while in custody marched into a Milwaukee, WI police station and after a brief conversation with the officer working the counter, began shooting. He fled and was shot by officers later as he raised his weapon against commands for him to surrender and drop the gun.

Attacks outside of police stations in the parking lots and entrances add to the list of violence against law enforcement in their own workplaces. Some police stations are fortress-like and for good reason. Many agencies still want their facilities to be safe and open spaces for citizens as they should be. For violent criminals to destroy that sense of safety is an insult to the public.

Whether tougher penalties would affect the decisions of those bound by hate is subject to debate. But to label them merely as vandals or even assailants ignores their true purpose and identity. They are, and should be prosecuted as, domestic terrorists.