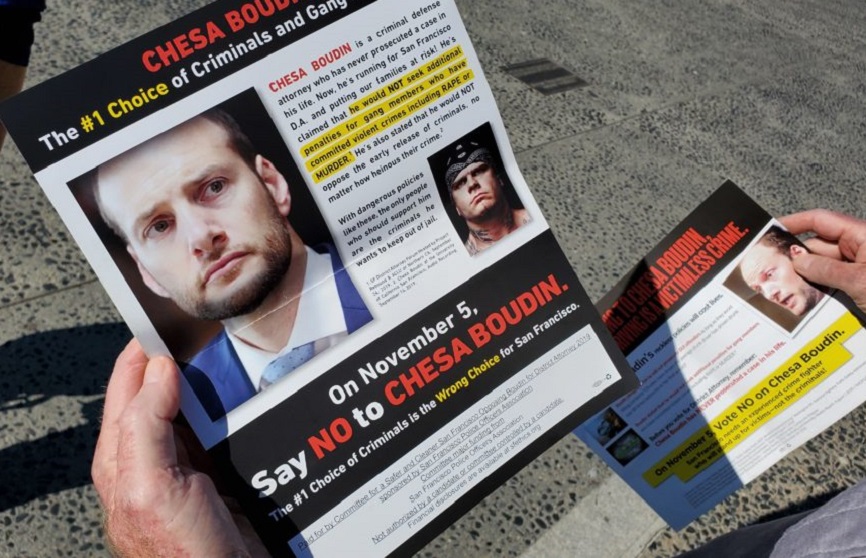 San Francisco, once one of America’s finest cities to live or vacation in, continues its downward spiral into urban anarchy. With the recent elections, the city, already not known as a cop-friendly place, has just gotten markedly more challenging for the city’s police officers. The city’s voters have seen fit to elect a pro-criminal radical former defense attorney as the city’s top prosecutor.

However, I wonder if their opposition may have been a tactical error. In cities like San Francisco, Portland, and Seattle, the voters seem to choose the opposite of what the cops want. If the SFPOA wanted Boudin to lose, they should have thrown their passionate support behind him. Then Boudin would have lost for sure.

I’m being facetious—mostly, but it’s not too far from the truth. Still, in reality, there is no way anyone would ever believe the cops could even pretend to support such a weak-on-crime candidate. Along with an interesting, okay, impressive in some ways, backstory, this guy has just about every anti-qualification which would make a cop recoil. 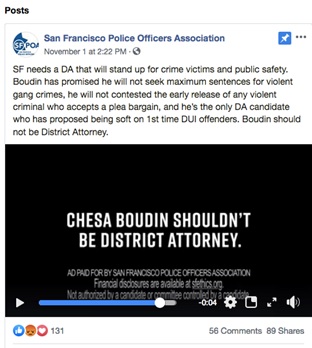 San Franciscans have elected a Yale-educated defense attorney to be the city’s lead prosecutor. A man who hasn’t prosecuted a single person for a single crime. These city voters are not alone in their lunacy, though. Seattle, Boston, Dallas, and Philadelphia also elected non-prosecuting prosecutors.

Among Boudin’s other anti-bona fides, his parents belonged to the infamous Weather Underground. When he was a baby, the court sentenced both parents to long prison terms for their role in murdering two police officers and a security guard back in the 80s. His mother is out of prison and now teaching at Columbia University (well, how else would you reward a cop-killer?). His father is still in prison.

Since his parents were doing long stretches in the hoosegow, fellow unapologetic Weather Underground terrorists, and Obama friends, Bill Ayers and Bernadine Dorn, adopted and raised Boudin. They also did prison time after the FBI arrested them following years as fugitives.

Both still say they have no regrets about their actions, which led to the death of a New York City police officer. Similarly, elite American universities also rewarded both of them with professorships (you can’t make this stuff up).

You can’t blame Boudin’s affinity for an evil, inept political system to stupidity. Aside from Yale, the new SFDA was a Rhodes scholar, earning two master’s degrees from Oxford, and he speaks multiple languages. So, he’s not just a political opponent; he is a political enemy because he obviously doesn’t believe in the rule of law.

He’s not asking for lawmakers to change some laws; he’s unilaterally deciding not to enforce valid laws he doesn’t like. I guess he has an affinity for totalitarianism, too. He certainly doesn’t want a traditional America with equal justice for all. He wants a new country based on social justice for some.

Like parents—and surrogate parents—like son, Boudin an early job cemented his own political radicalism. He served as, as Monica Showalter of the American Thinker called Boudin, “Cuba-groomed from the start” and a “trusted propagandist, translator and advisor …” for—wait for it … the late Venezuelan president and tyrant Hugo Chavez.

Let that choice of jobs sink in for a moment. A man who chose to work for a brutal foreign tyrant is now the DA for a major American city. There really isn’t anything more to know before you assess what kind of DA such a radical man will be. Yes, I have prejudged him.

Before the election, Michelle Malkin wrote a column for Townhall.com titled, “Radical Spawn Chesa Boudin: Nation’s most toxic DA candidate.” And, of the four candidates running for DA, many reports described Boudin as the furthest left, which is saying something in San Francisco.

As reported in the Daily Caller, Boudin has said, “‘We will not prosecute cases involving quality-of-life crimes. Crimes such as public camping, offering or soliciting sex, public urination, blocking a sidewalk, etc., should not and will not be prosecuted,’ Boudin vowed in response to an American Civil Liberties Union (ACLU) questionnaire during the campaign.”

Boudin added, “Many of these crimes are still being prosecuted, we have a long way to go to decriminalize poverty and homelessness.” The city’s cops are in for a rough ride, having to work with a prosecutor who thinks like that.

Boudin uses the phrase “quality of life crimes” instead of some clever euphemism. Let’s apply logic here. Using his own words, what happens to San Franciscans’ quality of life when cops are not allowed to enforce, and the DA won’t prosecute crimes, deleterious to that quality?

Obviously, the people’s quality of life declines as does their ability to pursue happiness. The cops also suffer because many voters choose candidates based on emotion, on a few quips on social media, or on a political ideology disconnected from reality.

Then the people, and politicians, often blame the police when their quality of life declines. The voters don’t connect their votes to the results they experience from their candidates. That’s because the city’s leaders, with the complicity of the media, can push their narrative, while the cops remain the perfect scapegoats and a convenient target.