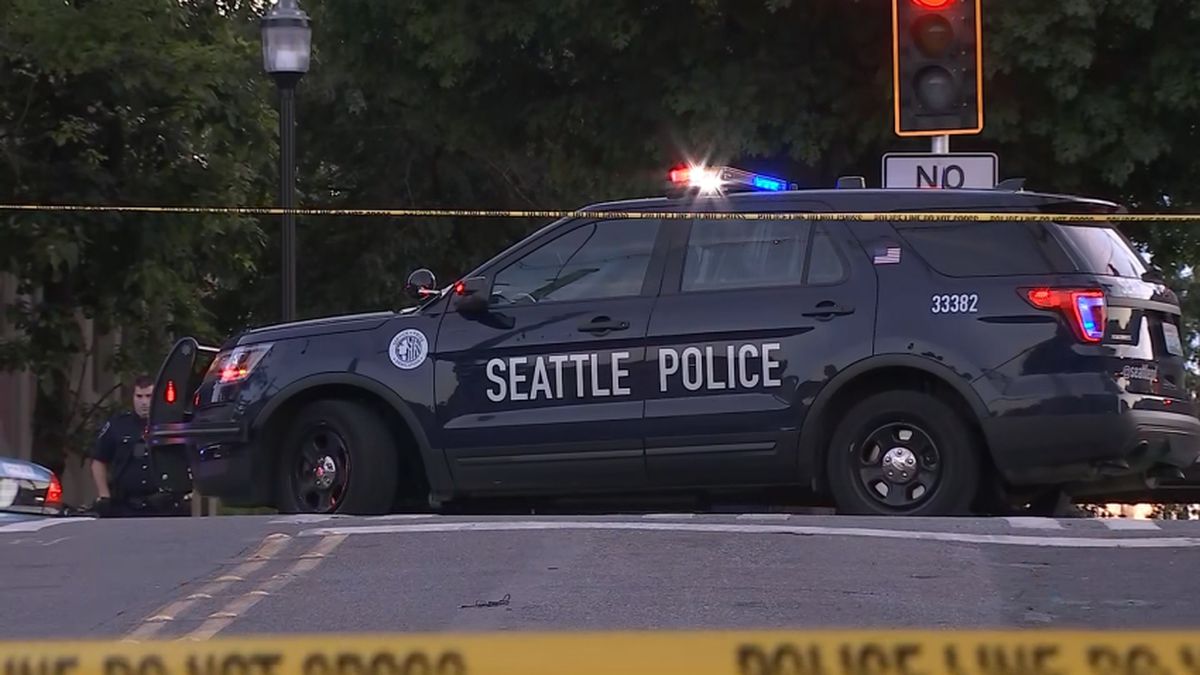 The Seattle Times has not been particularly cop friendly for a long time. Consider, in 2020, as reported by Jason Rantz at 770 KTTH Radio, “Left-wing Seattle Times reporter Mike Carter forwarded and legitimized a vicious smear against police officers and their supporters, referring to the ‘Thin Blue Line’ flag as a ‘symbol of white supremacy and institutional racism.’” 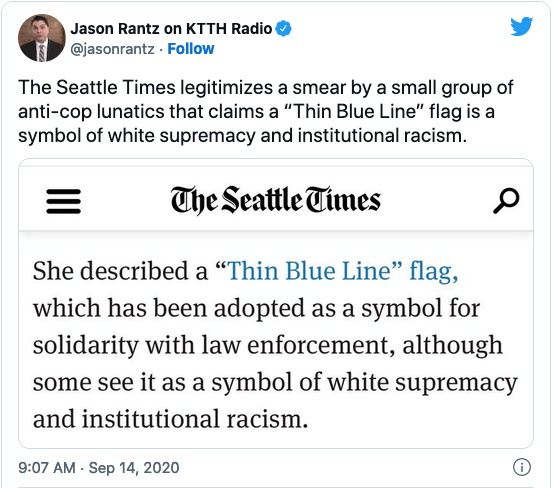 So, why should anyone pay attention to anything Carter writes or The Times, which has devolved into something the size of an instruction booklet you’d get with a new computer, prints? Well, we probably shouldn’t, and I normally don’t. But, in this case, his “reporting” is instructive because it diagrams a leftist “blueprint” on how to destroy cops, de-police communities—and get yourself a big payday.

The incident in question has resulted in a black man suing police accusing them of racism stemming from a traffic stop in downtown Seattle on May 17, 2020. The officer was found to have mistakenly believed the car the man was driving might be stolen. But cops can’t make mistakes, right? Because all cops are all racist all the time, right?

I spent over two decades on the “inside” in the Seattle Police Department, and I may be able to shed some light on what Carter seems to conclude (not his job) is officer misconduct. Am I as biased in favor of SPD officers as he is against them? Of course, I am. But I don’t pretend otherwise, and it doesn’t make my observations, based on firsthand experience, invalid.

Before I get into the details, I should mention Carter makes statements that probably don’t belong in a story printed as objective news, not opinion or editorial.

For example, Carter points out “The incident exemplifies findings by the Seattle Police Department’s federal monitor earlier this year, and an independent study in 2021, showing Black people — and other people of color — are far likelier to find themselves at police gunpoint in Seattle than white people, even though Black people make up a fraction of the city’s population.

“That discrepancy holds for the use of force by officers on the city’s residents, even though the data shows white people are more likely to be armed when confronted by officers. Sims had no weapon when he was stopped.”

Carter leaves out the equally pertinent statistics that show black suspects commit a disproportionate amount of crime. Why would he leave that out? Is it because he has an agenda?

Another bit of apparent subterfuge he claims, “data shows white people are more likely to be armed when confronted by officers.” Legally or illegally armed? That makes a difference, right?

Carter adds that the suspect “had no weapon when he was stopped,” an apparent criticism of officers drawing their weapons during the felony stop. Carter doesn’t explain how the officers could have known the suspect wasn’t armed at that time, making his comment irrelevant and ignorant. After covering cops for so long, you’d think he’d know how cops conduct felony stops.

The suspect is suing the SPD alleging, without evidence, the officer stopped him because he is black. Now, I’m not going to argue the officer didn’t make a mistake. But I will argue it appears to have been an honest mistake.

Let’s take a look at what happened. According to police reports, an SPD sergeant, serving as an acting/lieutenant (A/LT), observed the suspect driving at 5:08 a.m. with his car’s headlights off, “despite it being dark.” Lights off is often a sign of criminal activity or driving under the influence and is a traffic offense justifying a legal stop.

The A/LT said when he ran the suspect’s vehicle plates the system returned a possible stolen car hit out of nearby Snohomish County. From this point, the A/LT and assisting officers treated the incident as a “high-risk” felony stop.

Carter, in telling the story, seems to skip to the end. He reports as if the officers should also have skipped to the end where hidden facts become known. While running the plate, the A/LT saw the driver parked the car next to a convenience store and he got out of the possible stolen car.

The A/LT activated his emergency lights, and he and other officers approached the suspect with their guns drawn, which is standard with a high-risk, felony stop. Despite what Carter might think, the officers could not know the car was not stolen or that the driver, then a suspect, was unarmed. They sure weren’t about to bet their lives he wasn’t.

Carter also made this curious comment: “a baffled Sims complied with the officer’s orders.” So, Carter is a mind-reader? But, while this suspect may have ultimately been innocent, guilty suspects also routinely pretend they’re “baffled” in similar situations to throw cops off.

Carter also made a big deal of the A/LT telling the suspect, “I have no doubt that’s your vehicle. Sometimes there’s a misunderstanding.” Based on my experience, the misunderstanding he’s talking about is in the erroneous reporting of a stolen vehicle—it happens.

Here, an investigation showed the A/LT had mistakenly transposed two numbers when he ran the plate. Now, those who accuse him of racism, including the driver, likely believe he did this on purpose to justify the stop. How could he have known mixing up those two letters would bring return a stolen hit on that car in one try? What are the odds of that?

It seems every comment the driver and his lawyer have made wreaks of baseless accusations of racism, as if from a blueprint. Where’s the evidence the A/LT was racist? Simply because the driver was black? Isn’t that assumption racist?

With all the illegitimate scrutiny SPD officers have been under for more than a decade, based on the debunked consent decree, Carter alludes to, inflicted by the anti-cop Obama administration, would even a truly racist cop take a chance like that?

In the lawsuit, they even contend minutia such as sunrise and sunset times were evidence of officer stopping the driver because he was black, not because it was dark. All of this comprises a blueprint for de-policing and the illegitimate targeting of police officers as racist.

Frivolous, false accusations of racism like these do not create a better criminal justice system. It simply creates unwarranted mistrust and severely damages law enforcement and public safety. But it’s not just about hating cops; it’s also about the money.

To cover all their bases, the suit alleges the officers “could see that [the driver] was African-American and were motivated to use unnecessary force by conscious or unconscious bias.”

So, with this anti-police blueprint, even if the cops weren’t “racist” on purpose, they may still have been “racist” unconsciously. How, exactly, does a cop argue against something they allege he or she did “unconsciously?” They can’t, and that’s the point.

For example, the driver dutifully said, “When Seattle police ordered me out of my car at gunpoint, I was terrified of being shot. I felt violated. The police targeted me because I had the audacity to drive while Black in Seattle. I do not feel safe driving in the city knowing that this is how SPD operates.” Perfect! Exactly according to the script.

Of course, there’s no actual evidence of racism in these statements, only conjecture and racist hyperbole. After all, the cops are racist because they’re cops, right? Well, at least, that’s the “evidence” according to the blueprint.

Joining in the disgusting cop-slandering chorus, the man’s attorney said, “officers endangered his client’s life without justification … as part of a well-documented pattern of unlawful stops and excessive force against people of color.” Again, perfect! But that’s how it is when you follow a script.

“Pattern” is one of the blueprint’s requisite words, normally accompanied by “practice.” Probably just a little slip-up. It’s so hard to keep all the lies straight.

Another aspect that should be considered, which I know about from experience, is (and no disrespect to supervisors intended), in larger jurisdictions like Seattle, sergeants don’t make frivolous traffic stops (if they make them at all)—especially if they’re serving as A/LTs.

Supervisors normally remain available in case their officers need them to screen incidents or arrests. The key factor in this situation is the inciting incident that caught the A/LT’s attention. A driver driving in the dark with his headlights off. This will get any cop’s attention. Could it be innocent, as it appears to have been here? Sure. But it’s still an infraction and a matter of public safety. Any officer would be derelict to ignore it.

Next, though it turned out to be in error, the registration came back as a possible stolen car. This will heighten any officer’s attention because the incident has gone from a traffic infraction to a possible dangerous felony crime.

Again, the officer would be derelict if he ignored the information or if he erred on the side of “it’s probably a mistake.” That could be deadly not only for him but also for his backing officers.

The radical left has created a criminal justice system where anyone may accuse officers of being racist, and, too often, officials accept it at face value without evidence. We’ve seen this blueprint used in cases from Atlanta, to Baltimore, to Minneapolis, to Portland, and to Seattle. Officers risking their lives, attacked as racist by race grifters, searching for another payday, just for doing their jobs.

And. in places like Seattle, they’ll almost certainly be offered the cash. The city has been paying out ridiculous claims for decades. In this anti-police atmosphere, the leftist radicals are certainly not about to stop the social justice gravy-train now. Not when they have a blueprint that works so well.