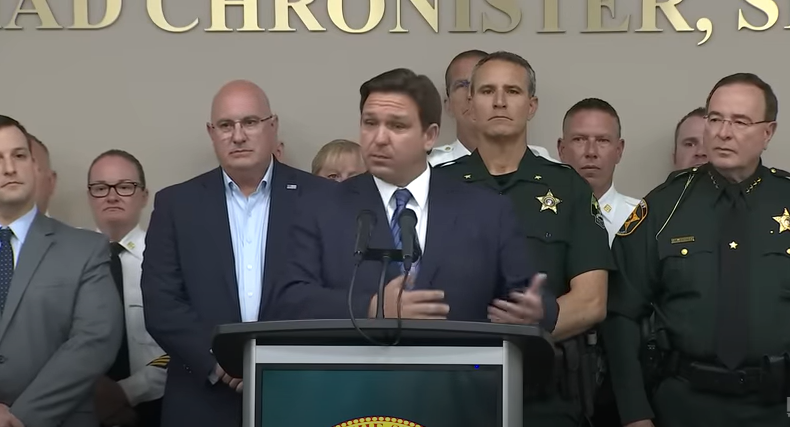 Florida Governor Ron DeSantis is unambiguously pro-police and pro-public safety. On August 4, 2022, he traveled to Tampa, Florida, and took to the podium to announce the official removal of Hillsborough County State Attorney Andrew Warren, a Soros-backed prosecutor, for undoing tons of police work by letting criminals walk and refusing to prosecute certain violations of state statutes.

Among the dais was Hillsborough County Sheriff Chad Chronister who was joined by sheriffs from surrounding counties and local police chiefs.

Mere minutes into his oration, Governor DeSantis made this one statement to underscore the point regarding oath-swearing prosecutors who betray their role among criminal justice system practitioners positioned to seek justice.

“The response that we got was a lot of frustration on the part of law enforcement for criminals being let go and crimes not being prosecuted,” Governor DeSantis said. He continued his point and named names, saying, “The prosecutor, district attorney, for this judicial circuit, Andrew Warren, has put himself publicly above the law.”

Eyeing the official site of Florida Governor Ron DeSantis, he wrote these words and pushed them out via social media:

“Prosecutors have a duty to enforce the law, not pick and choose which laws they agree with.

“The State Attorney for the 13th Judicial Circuit, Andrew Warren, has instituted nonenforcement policies and has declared that he will refuse to enforce laws he doesn’t like.

“In Florida, we will not allow a prosecutor to be a law unto himself.”

With tons of pro-police material emanating out of the Sunshine State, it seems some Soros funds made it to an otherwise conservative region—one particular office in Tampa. The name Andrew Warren is now outed, showing the tentacles of pro-criminal operators’ slither, reach, and mission creep.

If you haven’t already done so, go consume Steve Pomper’s piece on Soros and the arterial span he has somehow managed, thanks to big bucks furnished on behalf of sales on prosecutors. In context, Governor DeSantis has not only spoken out against such misconduct —removing an antithetical operator in our midst— but imperatively stepped forward for law enforcement officers and the victims they stand behind.

Cops have it tough enough without an avowed prosecutor going in the wrong direction. Equivalently, crime victims are not irrelevant; they deserve to know why they have not been subpoenaed to testify against their assailants.

The governor’s full press conference is here. Take a listen to this brief outtake of Gov. DeSantis addressing the problem in his territory, exercising his constitutional authority to nip negligent prosecutors in the bud:

Florida’s objective is clear: Folks at the state capitol care not to have any of its 67 counties resemble the likes of San Francisco, New York City, Los Angeles, Portland, Chicago, and others pinned among the free-for-all ilk.

When I wore a police-blue uniform years ago, this very same county had a state attorney who was ostensibly adept at “tossing cases” solidified by hard-grinding law enforcement officers throughout Hillsborough County, all of whom tacitly harbored putting their lives on the line as per their oath (similar to the one sworn by prosecutors, who also carry justice badges), only to watch their work get flushed.

Cops inquiring why their work was washed away would be met with word salad ala Kamala Harris. LEOs are prime BS detectors; frustrations burgeoned over the DA’s office shelving Criminal Report Affidavits (CRAs) before they ever saw the inside of a courtroom.

Generally, cops would do what cops do —respond to incidents, investigate, effect arrest(s), submit Criminal Report Affidavits as Requests for Prosecution— only to watch it all go away. How so? The prosecutor at that time was blacklisted as a “defense attorney disguised as a prosecutor for the state.”

I never knew of George Soros back then, but now I wonder…

As I recall, one tale was that the state attorney’s office was “overworked,” had “too many cases,” and had a deficit of lawyers to prosecute cases. Sounds a lot like what law enforcement officers deal with (not wearing suits in the relative safety of offices secured by bailiffs and such), yet they press on with the tenets spelled out in the police officer’s oath. All this despite the harangue we’ve come to know as the anti-police movement.

Those variable excuses add up to many victims receiving zero justice, literally dismissing their life-altering event as a mere trivial matter. I admit feeling shame for having been an element in a system utterly failing citizens, akin to an employee disgruntled by upper management going against promised principles and constituents deserving of truth and fairness. “To serve and protect,” although symbolic of police purpose, applies to every gear comprising the criminal justice system, no?

“No pros” (No prosecution) was the proverbial en masse rubberstamp inked upon myriad Criminal Report Affidavits submitted by Tampa Bay cops. Infuriating! LEOs bottled up frustrations and bided time, much the same as victims who would call the police and sheriff’s agencies, inquiring why they’ve “heard nothing for so long,” ultimately asking that burning question, “So, what’s going on with my case?”

Generally, referral to the state attorney’s office was our agency protocol (let the parties responsible explain it all), but I was keen on calling on my victims’ behalf. After all, I wanted to know too; taxpayers invest in public safety to investigate crimes on behalf of victims who believe in the criminal justice system.

Could you imagine being a crime victim and told your case is not being pursued because they don’t feel it merits any attention…due to the prosecutor’s whim? (Not that they would admit that without some nifty obfuscation to confuse/repel people on the line.)

Like other sellouts posing as prosecutors across our beloved nation, the one to whom I allude eventually left the court complex for the private sector. Good riddance!

Mr. Warren was an eventual successor.

Something else evolved from the removal of DA Warren. An editorial board faction with the Tampa Bay Times published a piece rebuking Governor DeSantis for taking decisive action and condemned Tampa Bay’s top cops who enveloped him at the podium.

Per the Tampa Bay Times Editorial Board, “Hillsborough [County] Sheriff Chad Chronister should be ashamed for standing alongside Thursday as Gov. Ron DeSantis removed the county’s elected prosecutor from office. DeSantis’ suspension of State Attorney Andrew Warren was disgraceful enough. But Chronister and other uniformed members of law enforcement impugned their badges and damaged their mission by giving DeSantis cover for abusing his authority.”

In the context of the governor stepping in to correct a wayward prosecutor, cops are victims too. Putting oneself on the line with the stark reality of life-threatening conditions created by unmitigated malevolence makes police officials victims of a system designed to work together. Weak links stink.

The Editorial Board went on to call the governor’s presser “a circus.” Isn’t the real circus the one in which justice officials are letting criminals prance freely?

I mean, the beckoning for more “transparency” doesn’t get any more qualified than this, yet some still find an argument to plunge down throats. Government is not prodigious and pristine, but it can be worked on for the betterment of all. Isn’t this ousting an ideal example of a government working on behalf of the people (representation) and not just sitting on its hands?

The Times threw shade: “Nobody in Hillsborough [County] cares what [Sheriffs] Judd and Nocco think.” Wrong. I reside here and I sure do love to consider everyone’s perspective, cop or not, local or Louisianan.

The tirade continued: “Voters here elected Warren, and Chronister, too, and expect them to work together under the checks-and-balances system to bring criminals to justice.”

Checks and balances, like what do we do when a state attorney betrays his oath? Gee, what should be done about that? How about we “bring criminals to justice” by prosecuting every single case filed by cops? Why would victims accept anything less?

The full version of the editorial board’s Opinion piece can be viewed here.

It reminds me of the recurring poisonous contributions put forth by George Soros and his criminal-justice-my-way machine, acutely detailed by Fox News’s Tucker Carlson in the video above.

Reverting to Steve Pomper’s recent summation of Soros and the cherry-picked prosecutorial cabooses he strings along, I conclude by reiterating his perfectly encapsulated nugget and its applicability to our local media’s take on Mr. Warren’s dismissal and the police who justly applaud it:

“In the end, [the Tampa Bay Times] was full of the tired old anti-law enforcement, pro-criminal, social justice tropes, endorsing agendas and policies that have failed, continue to fail, and will always fail.”