Skip to content
The War on Warrior Training for Police: A Conversation with Lt. Col. Dave Grossman 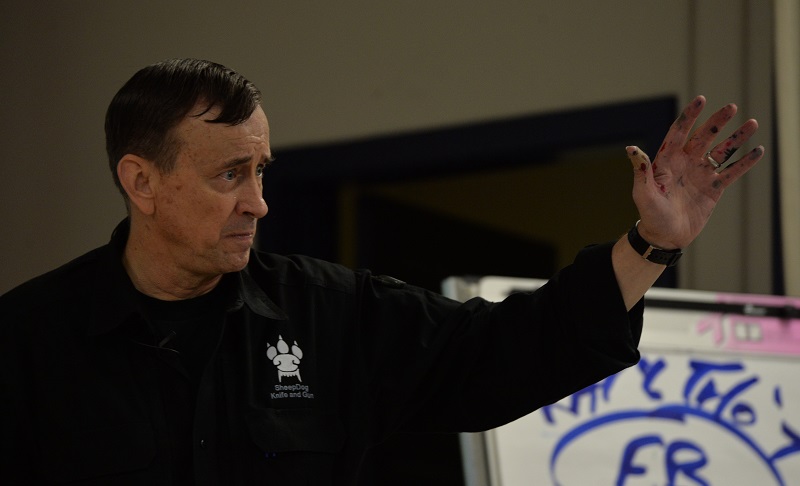 Minnesota law now reads “Sec. 14. [626.8434] WARRIOR-STYLE TRAINING PROHIBITED. Subdivision 1. Definition. For purposes of this section, “warrior-style training” means training for peace officers that dehumanizes people or encourages aggressive conduct by peace officers during encounters with others in a manner that deemphasizes the value of human life or constitutional rights, the result of which increases a peace officer’s likelihood or willingness to use deadly force. Subd. 3. Training prohibited. A law enforcement agency may not provide warrior-style training, directly or through a third party, to a peace officer.”

The statute, which went into effect August 1st,  doesn’t mention the face that appears on every news report about the law – Lt. Col. Dave Grossman. “It’s not my word”, said Grossman in a recent phone conversation. He doesn’t spend much time arguing the warrior and guardian vocabulary saying, instead  “My word is sheepdog”.  Indeed, those who have taken time to hear him speak know that  the “w” word is used only a handful of times, and only in context, never as a cheer or charge.

Often accused of promoting pseudo-science, Grossman cites his impressive credentials that include peer reviewed publications in journals, the well-researched library of books he has authored, and his time spent teaching psychology at West Point. He also relates how media presentations about his courses take content out of context to fit the narrative of Grossman being an advocate for warlike operations among police officers. He explained that he doesn’t take a lot of time promoting his qualifications, but the attacks on his credibility as a scholar ring hollow when compared with the facts of his resume.

As the author of On Killing: The Psychological Cost of Learning to Kill in War and Society, co-author of On Combat: The Psychology and Physiology of Deadly Conflict in War and in Peace, and contributor on Warrior Mindset: Mental Toughness Skills for a Nation’s Peacekeepers, and a trainer in the course The Bullet-Proof Mind-Prevailing in Violent Encounters and After, his study of “killology” is mischaracterized. “Psychology isn’t about teaching people to be psychotic. Criminology isn’t about creating criminals.” Grossman related that media reports aren’t merely biased, but intentionally misleading.

Grossman states that objective journalism is not the only thing lacking in the assessment of current affairs in criminal justice, so is the science. Grossman observes that the true picture of a  violent America is not reflected in the reported murder rate. Citing major advancements in emergency medical care saving thousands of victims that would have been homicides in years past, the apparent leveling of the murder rate is deceptive, requiring more law enforcement, not less. Noting the risks of terrorism on American soil Grossman contrasts many other countries where policing is nationalized and the military operate within their borders, U.S.  policing is local, so while we continue to fight the war on terrorism across the sea, the war on terror is left to the million police officers in our neighborhoods to remain vigilant and mentally prepared. “It wasn’t 400 soldiers that ran into the twin towers as they collapsed, it was cops and firefighters”. Intense training for the physical and mental challenges of that mission is essential.

Grossman believes it may take a generation to restore the narrative of police officers as the good guys. He points out that instead of growing up on Adam-12, Dragnet, and characters like Marshal Matt Dillon on television, today’s generation was raised on The Wire, Breaking Bad, and The Shield where bad cops were the norm.  In addition, educators from elementary to college often aid the narrative of police as the enemy.

A significant generational plague, says Grossman, is that screen time has created a generation of children who are over stimulated in bad ways and under stimulated in good ways. He promotes screen withdrawal in his book Assassination Generation: Video Games, Aggression, and the Psychology of Killing, and support of https://www.takethechallengenow.net/, a program for withdrawal of screen addiction.

Besides the sheepdog analogy Grossman cites the mission of American law enforcement as akin to the big dog on the porch of our childhood homes. Gentle and tolerant of the householders, but ready to growl at a trespasser. His training days always end with his big red and blue markers on the flipchart writing the word love, affirming that the concept of love is the ultimate motivation for service as a law enforcement officer, soldier, or other first responder. That seems hardly a violation of Minnesota’s new law prohibiting training that deemphasizes the value of human life or constitutional rights.