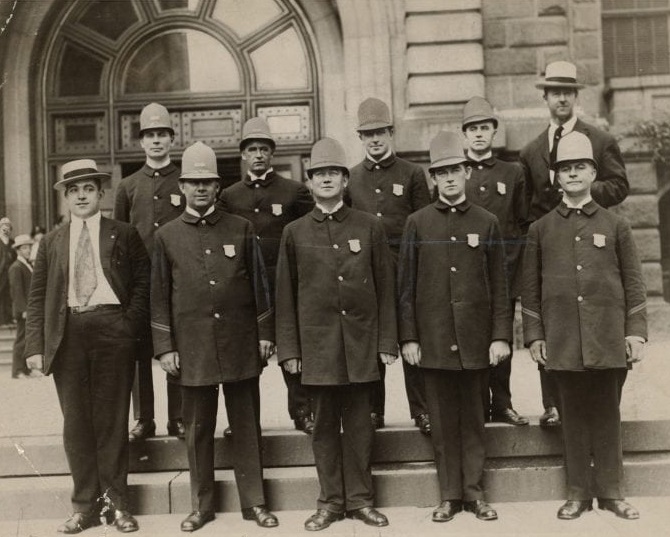 If you go to the Boston Police Patrolman’s Association (BPPA) website, you’ll find something curious. An offer to purchase a challenge coin, which commemorates the “Boston Police Strike of 1919.” The BPPA recognized the event’s centennial last September. Intrigued, I read on.

Seems in the shadow of the end of WWI and the Spanish Flu epidemic, there was a confluence of factors affecting business, laborers, and the organized labor movement. According the BPPA website’s History page, veterans returning from the war expected “good jobs and increasing wages.” At the same time the “fledgling labor movement in America was meeting intense opposition from corporate interests.”

Riots in Boston, which included some bombings, were blamed on “Eastern-European immigrants influenced by the Russian/Soviet revolution of 1917 and local anarchist groups seeking to bring radical socialist change to America” (the more things change, the more they… well, you know).

Citing serving “under deplorable conditions, working 84-96 hours per week… and living in rancid, rodent/insect-infested station houses,” this provided the stage for the 1919 Boston Police Strike. Officers even needed a captain’s permission to leave the city. The officers’ plight ignored for over a decade, the Boston cops reached a breaking point. They voted to join the American Federation of Labor (AFL) and then voted to strike. The vote was 1341 to 2 in favor of striking.

Governor, and future President, Calvin Coolidge, declared martial law and called out the National Guard. The governor vehemently disagreed with employees striking against public safety. Gov. Coolidge told the president of the AFL, “Your assertion that the Commissioner was wrong cannot justify the wrong of leaving the city unguarded. That furnished the opportunity, the criminal element furnished the action. There is no right to strike against the public safety anywhere, anytime, anyplace.”

The governor fired all the officers who voted to strike, and none were ever hired back. Instead, the Boston Police Department hired veterans just returned from WWI. This created a ripple effect felt in Boston police hiring cycles for the past century to this day.

Virtually the entire department of patrol officers were replaced with a mass influx of new officers hired to replace them at effectively the same time. Since then, every 30-40 years a significant number of officers retire, and new officers need to be hired in large numbers.

I’m not a big union guy. I bristle at the socialist connection that exists in many labor unions. However, I understand there can be factors that make unionizing seem desirable, generally. There are the executives leading some corporations who have a reputation for mistreating, exploiting, and insulting their employees.

For example, during this CCP virus pandemic-created economic crisis, there are stories of CEOs of large corporations raking in millions of dollars in bonuses and severance packages while the rank and file are being been laid off—for some permanently. No bonuses, no severance, just a phone number or web address for the unemployment office.

To be fair, there are also companies who are doing right by their employees and have declined taking their salaries during the crisis—some with the money going to help their struggling employees. Here is an example of 13 of them.

Still, another reason why unions may be necessary in some circumstances applies specifically to public safety: police, fire, and EMS are a special case. Normally, it seems anathema for government workers to form unions. Even FDR adamantly opposed them. According to the Heritage Foundation’s James Sherk, in the New York Times, George Meany, president of the AFL-CIO, said, “It is impossible to bargain collectively with the government.”

The labor movement leaders intended to use labor unions to gain for the workers a greater share of a business’ profits through increased pay and benefits. However, government does not generate profits. It pays its bills by collecting taxes from the people. FDR considered government unions striking against the taxpayers “unthinkable and intolerable.”

Sherk explains, “Government collective bargaining means voters do not have the final say on public policy. Instead their elected representatives must negotiate spending and policy decisions with unions. That is not exactly democratic – a fact that unions once recognized.” But public union supporters certainly don’t recognize that today.

Having said this, I think there maybe one exception for what has become an obvious reason: public safety, at least in the modern era, police officers and firefighters (including EMS personnel), cannot and more importantly do not strike—even if they’d sometimes like to.

Still, especially with all of the anti-law enforcement sentiment existing in many state and local governments, would cops have any leverage without labor union protections? They sure can’t rely on the integrity of their political leaders to do what is right. Even with union protections, cops watch their political leaders act in bad faith all too often.

The reasons for public safety not striking should be obvious: if cops and firefighters strike, millions of dollars in property will be lost, people will get injured, and some will die. And while in states like Washington State it’s illegal for any public employee to strike, teachers, for example, ignore the law and strike anyway—all the time. Because the cops cannot, and do not, go on strike because of their dedication to their communities, don’t they need a formal structure to protect officers’ rights?

Maybe there are other options. If there are, I haven’t thought of them and haven’t found anyone who has. This puts police officers in a very tough position. Recently, I wrote about a federal judge who accused a police union of holding city residents “hostage” to their contract demands.

But without the ability to negotiate, for example, increased employee health insurance contributions in exchange for better pay or other benefits, because cops can’t—and won’t—strike, what leverage does the rank-and-file have to negotiate with?

In 1919, virtually all of the Boston police officers felt their situation was so intolerable they voted to join a labor union and to go out on strike. While the ethics of this can be debated, the responsibility does not fall entirely on those street cops who walked off the job. This burden should be equally carried by city and state leaders who allowed the police department to deteriorate so badly, it seems, anyone in those cops’ positions would have done the same thing.