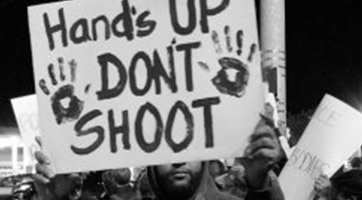 On August 9, 2014, in Ferguson, Missouri, Michael Brown,was a suspect in a theft from a retail store. Brown was accompanied at the store by the plaintiff in this lawsuit, Dorian Johnson. Defendant Darren Wilson testified after encountering Michael Brown and Johnson, that Brown attacked Officer Wilson in his police vehicle and a fight commenced over control of Wilson’s handgun. Brown and Johnson then fled, with Wilson in pursuit. Brown turned to attack Wilson again and was fatally shot by Wilson.

Violent protests followed. Repeating false claims that Brown had surrendered before he was shot, protesters chanted, “Hands up, don’t shoot.” Protests, vandalism and looting, continued for over a week in Ferguson.

On March 4, 2015, the U.S. Department of Justice reported the conclusion of its own investigation. It found forensic evidence supported Officer Darren Wilson’s testimony and that of the witnesses who corroborated Officer Wilson’s account.

On April 29, 2015, Johnson filed this lawsuit seeking money damages against the defendants.

In the aftermath of these events an erroneous narrative of police misconduct has produced what is now known as the “Ferguson Effect”. The Ferguson Effect has become so prevalent as to embolden suspects to refuse to comply with police commands, instigate violence against officers and bring civil actions against police who are guilty of nothing more than doing their job. The result of the Ferguson Effect has been a reduction in proactive law enforcement by agencies across the country and corresponding increases in violent crime.

The Fourth Amendment issues and consequences to individual law enforcement officers in this case are of the utmost importance – importance not only to those who dedicate their careers and place their lives in harms way to protect their fellow citizens but to those citizens and their communities. It is the responsibility of the National Police Association to raise these issues and by doing so serve the interests of those who serve us all so selflessly.

The amicus brief is available here