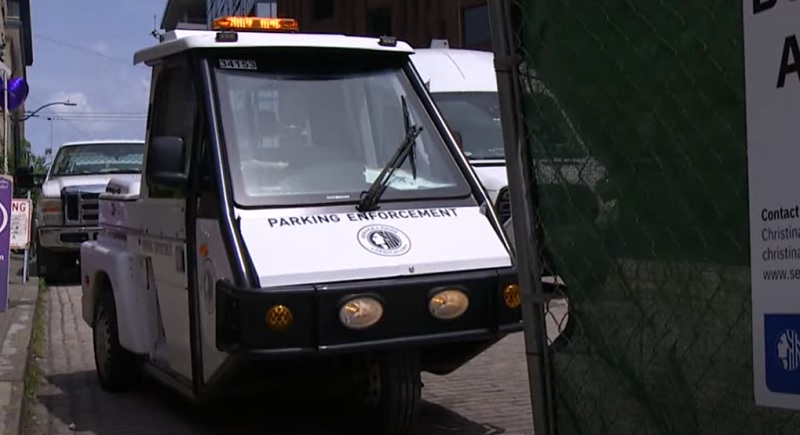 Many Seattle politicians can find nothing about the police department they like—except for defunding or otherwise disrespecting it. Whatever they can do to take any amount of prestige away from the cops the happier city leaders are.

For example, until recently, the parking enforcement unit was attached to the police department. But city defunders apparently didn’t want Parking Enforcement Officers (PEO) associated with the nasty cops. Instead, they wanted to move them to the city’s department of transportation (SDOT).

However, the Seattle Parking Enforcement Officers Guild (SPEOG) didn’t want to go to SDOT. It seems they preferred, according to the South Seattle Emerald, to go to a new “Community and Safety and Communications Center” (CSCC).

The SPEOG, argued “the placement [within the CSCC] would signal the parking officers’ role in the city’s reimagined approach to public safety .” Of course, “reimagined” is a euphemism for defunding. Regardless, the city passed legislation, creating the CSCC.

I’m holding out that there was a less dubious reason than “wokeness” for the PEO guild to support the defunder’s agenda. Currently, parking enforcement is under SDOT. But to show you what the PEO’s priorities are, here’s a quote from the SPEOG President Nanette Toyoshima:

“Toyoshima believes that [SDOT Director Sam] Zimbabwe’s emphasis on efficiency and best practices is misplaced. ‘If we’re all about following the [current] national best practice, that would be the status quo, right?’ she asked. ‘Are we all about efficiencies within parking? Or are we about being a leader in alternatives to policing [another euphemism for defunding]?’”

The quote was in response to a “letter, Zimbabwe wrote that consolidating parking enforcement into SDOT is a matter of conforming with ‘national best practices,’ citing nearly a dozen examples of cities that successfully shifted parking enforcement from police to their transportation departments.”

But, regardless of “best practices” or “alternatives to policing,” after what happened during the transition away from the SPD, checking off the “competent” box on their resumes going forward won’t be something the people responsible for this massive oversight can do.

According to KOMO 4 News, “For seven months, the city’s parking enforcement officers were writing tickets even though they were not authorized to do so.”

Now, the city will have to void or refund some 200,000 parking tickets. And they haven’t even tallied the likely significant number of cars impounded (towed) during that time period.

When the Parking Enforcement Officers (PEO) were attached to the police department, PEOs had limited commissions that authorized them to cite illegally parked cars. But someone neglected to “re-commission” the PEOs (or whatever woke name they’re known by now) when they switched city departments.

Now, the city will be refunding “between $4.5 and $5 million…” plus the associated administrative costs.

With all of the various leftist types of justice they throw around (social, environmental, climate, etc.), now parking violators can benefit from some karmic justice. Seattle tries to present itself as run by considerate, kind, and caring leaders and their staffs. However, try to park in Seattle sometime—if you can even find a space. It isn’t fun. You can’t get away with illegally parking, but people illegally camping all around your car and committing associated crimes, get off all the time, if they’re crimes are enforced at all.

Several years ago, when I still visited downtown Seattle, I went to my daughter’s birthday party. I parked a block away. I bought a parking permit from the city meter device and displayed it in my window.

When I returned after the party, I had a parking citation on my windshield. A PEO had cited me for placing the permit in the “wrong” window. And the fine was for the same amount as if I hadn’t bought a permit at all.

But I don’t blame the PEOs back then. The city had them on a short leash, heavily monitored, and pressured into raising revenues. Especially, since the cops have nearly stopped issuing traffic and parking citations due to low staffing and the city leadership’s anti-police vibe.

KOMO spoke with a driver named Robert Roth, who encapsulated the oppressive parking costs, availability, and enforcement in Seattle. He said, “It’s like you have to take out a second mortgage to park around here. I don’t like to see the city have to get hit hard with extra expenses… the city can afford it. And at the same time, I’m not sure everyone getting a $44 ticket can afford it.”

Uber driver Linah Ododa said, “I’m rooting for those who’re getting money back.” The driver also vented, “It’s tough times for everybody you know, and if someone comes and gives you a parking ticket and you have to pay for it, waste the whole day going to court, trying to fight it (and) pay more money. I think it’s ridiculous.”

What’s also ridiculous is a city’s political leaders destroying public safety in one of America’s major cities. And, now, they can’t even get parking enforcement right.