Skip to content
Rather Than Cops Reflecting Community Demographics, Communities Should Strive to Reflect Their Cops? 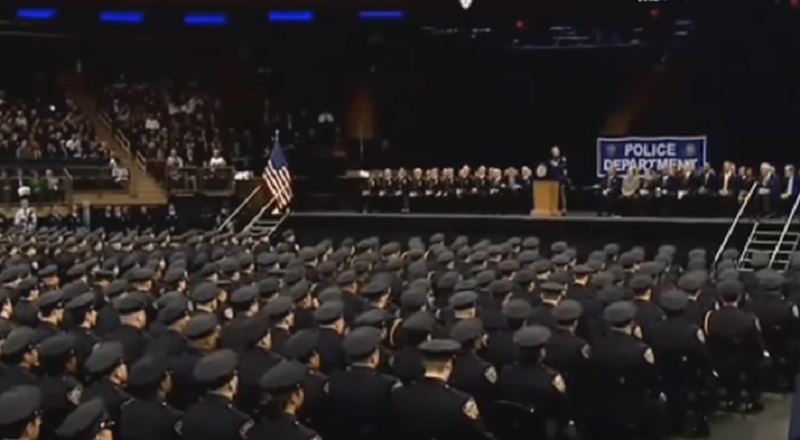 Too often, we on the pro-cop side get so used to playing defense we lose the agility to play offense when we need to. We react to what we’re accused of and defend it, and we all know that’s a long list. That’s because what the radical left accuses cops of doesn’t require the truth to be even in the vicinity of their accusations. In fact, they encourage myths and lies about cops.

That’s what I thought about when I read a select group email I received recently from law enforcement writer/author Chuck Klein. The first paragraph of his email reminded me of how crucial it is to look at issues in unique ways. In this way, maybe we can turn the tables on the cop critics.

The goal has been for police agencies to be a composite of society. Wouldn’t it be better if the community’s objective were for society to emulate LEOs? In other words, shouldn’t society aspire to be more like American LEOs, i.e., honest, law-abiding, physically and morally fit?”

You can read an example of Klein’s recent work here at American Police Beat.

Think about what Klein suggests here. It’s so simple yet so cathartic. Doing this would reverse the leftist, anti-public safety strategy into something sensible. The law enforcement hiring process exists to hire the most qualified candidates possible out of a large pool of hopefully competitive applicants.

That’s hard, nearly impossible in some jurisdictions, these days but still should be the goal. When I tested back in the early 1990’s, thousands of applicants showed up, even for limited positions, for the initial written exam held in an auditorium at the University of Washington. Today, recruiters couldn’t fill a janitor’s closet.

The hiring process is a challenging gauntlet of exams, processes, and protocols designed to ensure agencies put only the most “honest, law-abiding, physically and morally fit” cops on the streets.

Of course, some candidates will fall short of these goals, won’t make it through the hiring process, or training or will fall short at some point during their careers. That’s a consequence of hiring human beings. Still, the people who become police officers are among the best and brightest people any community has to offer.

Setting aside the rare anomalies, cops represent what we should want every community member to strive to be, as Klein noted above. Instead, the focus of the radical left, too many of whom sit in positions of authority to hire and fire cops, is to select officers based on social justice standards—artificial “qualifications,” what leftists call “diversity, inclusion, and equity.”

When we think of the qualities we’d like to see in our fellow human beings, they are the qualities agencies ostensibly look for in their police officers. Ideally, cops have integrity and are intelligent and kind. They’re physically and mentally fit, decisive, and courageous. They want to help people and stop bad people from hurting good people or taking their stuff.

Think about what a selection process based not on equality, but on equity means. With a “DIE” protocol, there will come times when some unqualified “equity” applicant or candidate, of any description, will be chosen over a well-qualified candidate of another description (likely white or Asian). How does that selection enhance public safety? It might make lefties feel all virtuous (and better than you), but it doesn’t make the public safer.

But that’s how “equity” in hiring and promotions works. Let’s say there’s a candidate who happens to be a man and happens to be white. He scored well on the police exams and other assessments, has a college degree, and has served in the military.

The other candidate’s scores were mediocre, he has a GED, and a non-disqualifying misdemeanor arrest from six years ago. However, that candidate is BIPOC or LGBTQ (or a combination), so they hire this candidate over the one objectively more qualified. How does it make society safer to consistently hire the lesser-qualified candidates to achieve some subjective “equity?”

Now, even normal liberals might think the “equity” pick is great on paper. Too often they operate as if police candidates are plug-and-play robots. As if they’re all similarly qualified. They’re not. Better candidates tend to perform better (yes, you may quote me on that). It may not be 100 percent, but it’s close.

The radical leftists are attempting to accomplish their political-cultural “revolutionary” goals. Okay, good for them for reloading their virtue signal magazines. But what are the practical consequences?

What happens when some thug(s) attempts to kick in your elderly mom’s front door?

Do you want the best-qualified police officer to arrive, who is more likely to make the proper decisions and possess the right skills to save your mom? Or will you be happy to have an incompetent (but diverse) “equity” hire show up, maybe perform poorly, make bad decisions and risk your mom being ripped off, injured, or killed?

This is not hyperbole. What I just described is literally (yes, literally) what we risk when communities hire based on something as meaningless as skin color rather than on being the best qualified to do the job well.

This does not mean a BIPOC or LGBTQ candidate wouldn’t be the one who scored well on the police exam, has a college degree, and has served in the military. If that candidate, regardless of identity features, is the best candidate, then, of course, he or she should be chosen—over any lesser-qualified candidate. We shouldn’t even be having this discussion.

I don’t care if every single cop (firefighter, EMT, or medic) in my city is black, Hispanic, Asian, Native American, or white; is male, female, trans, lesbian, gay, or straight; is Democrat, Republican, Independent, or libertarian. If they’re the best the community has to offer, that’s all I care about (okay, unless he or she is a New York Yankees fan. That’s where this Red Sox fan draws the line).

But, seriously, that’s the problem with “equity” hiring. In too many blue jurisdictions, wokeists are attempting to make the police department “look like the community,” as if personal identity features rather than qualifications for the job are the most crucial factors in hiring cops.

As Klein alluded to up top, rather than the cops reflecting the unimportant racial, ethnic, gender, etc. makeup of a community, politicians should be encouraging people in their communities to be more like cops.