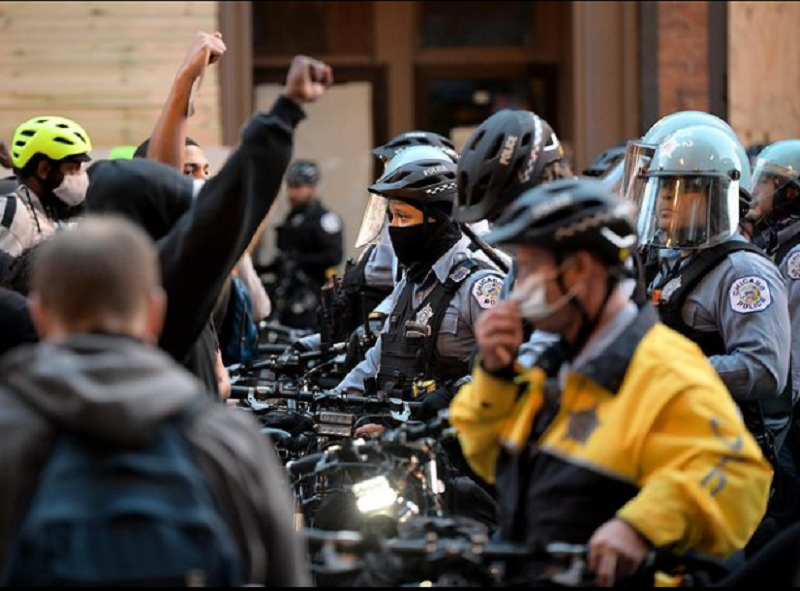 And the beat goes on. By that, I mean the beat where cops patrol to preempt and abate criminals aiming to victimize innocents. But another beat is burgeoning still. It is the steady push of police officers into heightened perils due to misgovernance and a seemingly careless attitude for the human bodies which fill those diminishing justice uniforms.

The latest starkness visited upon an unequivocally dangerous occupation emanates from Chicago, Illinois, whose police force has been on the brink of being shoved from a proverbial cliff on the heels of anti-cop propaganda.

Now, Chicago cops are decreed to work on their RDOs (regular days off) in order to attempt to maintain the department’s skeletal structure, thanks to its mayoral malfeasance in terms of treatment toward law enforcement. This, even on Law Enforcement Appreciation Day (January 9, 2022). Helluva way to pat Chicago’s heroes on the back!

New numbers are in and being published for all to see the utter nonsense and, some may argue, inhumane treatment of crime-fighters.

Starting with thee transparency of all transparencies, Chicago police officers have been subjected to so many wrongs, by a governing body whose majority appear with anti-cop bones in their spines. An elected body staving off cops’ deserved compensation for years…while police personnel put their lives on the line regardless.

A mayor whose hem and haw regarding the constitutionality of Chicago’s vaccine mandates —inoculations she insists must be administered— invariably leads to furthering the divide between the political nucleus and the truly pivotal changemakers we know and respect as LEOs aka professionals who honorably regard our Constitution’s principles, namely rights.

Dwindling roles of certified cops doing an ominous job oft-ridiculed by many who have no basis by which to judge, and a municipal government ostensibly unyielding or unmoved by the tragedies waiting to happen, is tantamount to negligence and complicity in an otherwise avoidable debacle involving human assets being treated like disposables. In this context, a hybrid of politicos and their minions dunked in anticop mentality is a menacing mix.

Cops know better. Law enforcement officers are the go-to professionals when it comes to intimately understanding the makeup of governing bodies and the filthy politics which play out on the daily. Police officers are no strangers to elected officials using them as trump cards in the game of power-producing roles and outright moral and ethical lapses. Or should that last word be forfeiture?

Speaking of last word, Chicago cops retiring, according to the latest figures, is a hair under 1000. That’s almost 1000 cops no longer working to keep streets safe. That’s nearly 1000 police officers indicating they have no respect for leader Lightfoot’s heaviness, ultimately departing the generally 13,000-officer police force, either leaving public safety altogether or conducting a lateral (cops going elsewhere, where they are appreciated and valued accordingly).

Here are the latest numbers indicating the severity of Chicago’s political base and how it grossly mismanaged its public safety ranks for way too long:

Without even looking up Chicago Alderman Raymond Lopez’s political party credential, his statements tell me his stance pertaining to the makeup of a markedly anti-police jurisdiction whose gun-laws tout backfires every week, especially on the weekends when holidays mean more people are out and about.

In the video, we witness, once again, how Mayor Lightfoot may be inclined to the tiny-sized Band-Aid approach, tardily cobbling together resources to add small bands of new cops while the ongoing hemorrhage of public safety spews like a glacier, and gun-related fatalities bloat actual (not politi-spoken) Chi-town statistics.

Many holidays in the Windy City culminate in the next morning’s lead news stories about mostly double-digit casualty stats stemming from gunfire. With such mayhem chronically impacting Chicago —or any city, for that matter— failing to meet public safety standards is undeniably negligent in ensuring enough police personnel to succeed the job with adequate, rested resources to conduct the mission safely, for all.

Alderman Lopez touched upon a facet of law enforcement in which two-officer patrol units are now deployed as a matter of routine. Ordinarily, such a duo strategy is necessitated by large populations in a metropolis region which experiences extraordinary criminal activity involving armed and extremely violent individuals.

The two-officer patrol concept has always been the norm in Chicago, until now.

As Alderman Lopez appropriately highlighted, Chicago police Officer Ella French had a few other cops with her when the gunman nonetheless launched lunacy and took her life during a traffic stop.

From the massive field of unknowns encountered by law enforcement officers working the streets, one unsung Chicago PD  hero no one ever knew existed is public safety dispatcher Keith A. Thornton, Jr., who also recently rebuked Ms. Lightfoot for her cop-crushing performance and grotesque human resources failures:

Mind you, that particular police dispatcher, like all his cohorts taking the public’s calls for service, is also likely up against the ropes. How so? Fielding calls in a public safety operations center is about sending help to citizens who dial 9-1-1. Depleted roles of cops exacerbated by now-cancelled days off for those LEOs left in the mix defaults to jeopardizing not only the paucity of police personnel but also the residents who historically rely on heroes to come and save the day.

No one can send resources when the resources have been carelessly cleaved and the powers that be stayed idle, all while violence mounted muscle due to asinine reform measures affording criminal cart blanche.

Indeed, there is much to unpack regarding beefed ranks of public safety pros. In the case of Officer French, one may speculate that several cops on scene didn’t make a difference anyway. That has applicability.

However, the strength in numbers credo remains a factor which ought not be discounted based on the tragic outcome of one example when the likelihood of preventing recurrence is foreseeable in similar situations involving cops.

Having served my entire police career in Florida, most of the Sunshine State’s law enforcement entities operate one-officer patrol units. That is, each cop is assigned a police cruiser to navigate calls and conduct traffic enforcement. With one-officer cars, one other premise is more visibility out in the community. A good thing, except for criminals who hatch wrongs and surely wish for zero police presence. We are referring to deterrence features employed by police agencies.

Though what-ifs arise in the context of solo-officer patrol vehicles, the concept is generally employed in much smaller domains, where city limits are specks in comparison to a metropolis like Chicago.

Yet things do happen no matter the size of a law enforcement contingent. As Chicago police dispatcher Thornton explained in the video, mostly about the terrible state of affairs for Chicago PD, that no matter the quantity of cops on any given scene, any can be shot. Mr. Thornton courageously dishes the dirt of Lightfoot’s regime and how precarious it is for Chicago cops and those they swore to serve:

The full-length version of Mr. Thornton’s viral footage (warning: includes graphic language) includes drawings of untenable logistics throughout the city of Chicago, with him painting a rather bleak picture supported by his own internal experience as a Chicago public safety communicator.

Before going sworn, I occupied our 9-1-1 operations center’s “hot seat,” taking the calls and hearing the stark terror boiling because of innocents being subjected to human depravity…hoping beyond hope for the words “We’re on the way…”

I can tell you that serving in this particular public safety seat validates anyone holding the responsibility in his/her ability to cite details and the temp and the fractures regarding the jurisdiction’s overall collective crime battle, especially when logistics require much more attention in terms of sufficient staffing and adequate equipment. That last line refers to Obama-era prohibition of surplus military equipment freely obtained by local law enforcement entities to effectively thwart extraordinary circumstances and primarily protect police and civilian lives. Seems little coincidence that he originated in the Chicago sector where he cut his political teeth, only to go large and go against American policing.

Subsequently, exclusively working midnight-shift as a sworn officer, I’ve had enough occasions where the neck hairs did a pronto ah-ten-hut! Relying on instincts and training and scene factors to formulate an approach (or not) in the context of a carload of people, all furtively motioning therein when most folks are sound asleep at 3:05 a.m. on a Saturday morn, is a recurring litmus compelling cops to assess and re-assess, strategizing and revamping along the way, often in fractional seconds.

In a case like this, among other factors, instincts are a golden mainstay. Bravery is one thing; stupidity is another. I usually opted to request a police canine (the only partnered cops in my agency, as is the case in most police departments down here) respond, exhibiting to traffic-stop occupants the presence of various assets readied for deployment, kind of subliminally putting the ball in their hands. (The only other common occasion where two cops share one cruiser in Florida is when newly hired police officers are being trained by a field training officer, an FTO.)

Most reactions to police canines being on scene, perhaps barking and “ready to go to work,” typically encourages would-be sprinters to stay exactly where they are, without movements in any direction. That is mostly why/when I asked for police dogs on some of my nighttime encounters in which I was grossly outnumbered and/or something didn’t feel quite right, all playing out in relatively darkness (ambient and behavioral terms apply). The so-called butterflies, for me, were more like things with stings, and I honored those pangs.

Cops are sages when it comes to situational cues telegraphing dangers in their midst. It’s not only easily interpreted by a suspect’s boldly displayed fisted hands at his sides. It could be utterly innocuous yet go ballistic in a nanosecond. So, yeah, better to have strength in numbers in the calculus of law enforcement confronting potential perils. After all, the current Census ratio is 332,422,813 (and counting) compared to roughly 850,000 or so law enforcement officers. Thank goodness the majority are law-abiding citizens!

One-officer police cruisers in my region has long been the protocol among a conglomerate of varying police forces, each relatively heavy with sworn strength tacitly supported despite the solo-car aspect, resulting in consistently honed response times among LEOs on duty.

Circling back to thee prime example of Chicago, notoriously rough-and-tumble locales requisitely entail robust numbers of cops. Federal formulas exist whereby census data in any given jurisdiction defines X-number of cops sufficient for the respective populace. Could it be that Chicago has already dipped below the determined thresholds?

From the constant news articles reporting on severely depleted roles of Chicago police officers, it sounds like the barometer metric fell in red, deeply. Alderman Lopez’s tone and the consternation detected in his facial expressions seems to agree: Significant trouble is afoot and growing (by virtue of reducing societal protectors), pushing more and more cops to the brink.

The consensus among the Chicago cops with whom I correspond is that their abysmal government is effectively failing, alienating guardians of safety by pushing law enforcers over the metaphorical edge and into other jurisdictions.

Bear in mind, most cops become LEOs where they submit applications because it is where they grew up, and desires to help secure home turf and protect people in it is the lifeblood to hang on and hang in. Nevertheless, who can blame any cop anywhere for preserving themselves and their families against tyrannical governing officials adept at maligning the jurisdiction by devaluing and demoralizing public safety pros whose concentration is on constitutional covenants?

Whether cops or firefighters or sanitation crews employed by municipal or county or state governments, why is human decency seemingly of no interest to the notably liberal leaders of these world-renowned metro enclaves? World-renowned…meaning the globe has eyes on you and what you are failing (refusing) to do for do-gooders.